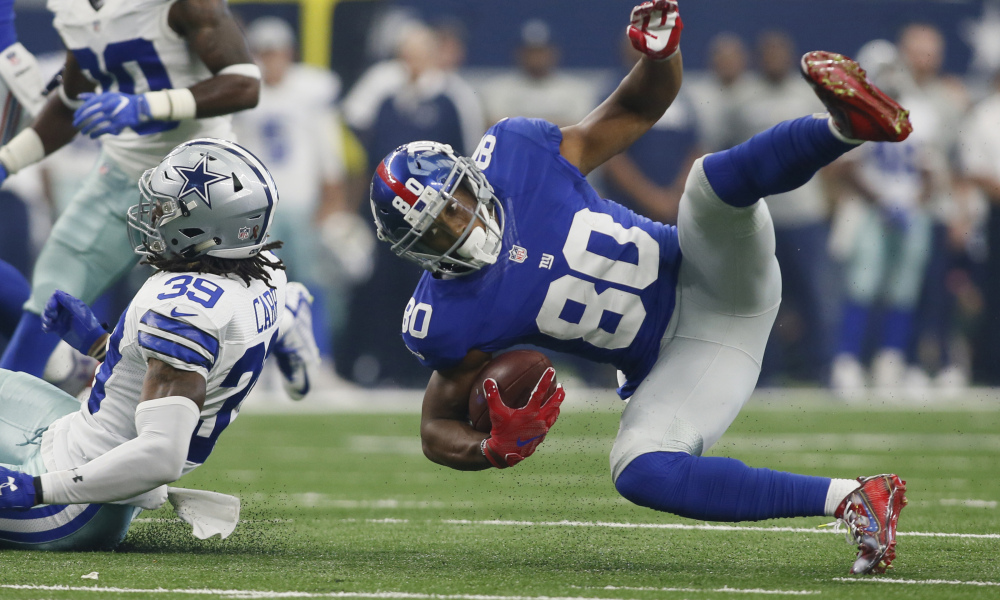 The following article has been culled from my Pro Football Spot New York Giants team coverage. The G-men have roster decisions to make this offseason. A new look is coming!

With pending free agents numbering in the 10’s, the New York Giants have some money-crunching decisions to make this offseason. Whether everyone is able to be retained will depend on asking prices and available cap space. The former is somewhat out of New York’s control. Roster releases can expand the latter.

Giants fans hate when the team decides to cut players they have grown to enjoy watching and rooting for. But this is a business, and some players are no longer worth their current contracts. Here is a nonexclusive list of players who could find their contracts reach an early finality, for a variety of reasons.

The first player that must be mentioned is Victor Cruz. Fans love Victor Cruz, but he is not a viable starting wide receiver in the league anymore. Yet, he is still being paid like one. Cruz, if released, will save the team $7.5 million next season and avoid an $8.5 million cap hit. His contract terms put him among the top-20 highest paid wide receivers in football on an average annual basis. It doesn’t take a die-hard Giants’ fan to know he isn’t worth that contract.

ALSO ON BUZZCHOMP: The End of Sherlock is At Hand

Cruz, like a number of these other players, could be welcomed back to the team, just at a lower price. New York obviously has no vitriol toward Cruz. Everyone would love to have him, just at a much lower salary scale.

The same goes for defensive back Dominique Rodgers-Cromartie. 2016 rookie Eli Apple unseated Rodgers-Cromartie in the starting lineup, relegating the latter to nickel corner. That is still an incredibly important position in the league today, but it probably doesn’t warrant the $8.5 million he will count against the cap each of the next two seasons.

New York can find more cap space in similar situations elsewhere on the roster. Jonathan Casillas and J.T. Thomas are two linebackers who may not be worth their pending prices. Casillas was way more effective on the field last year, mostly because Thomas barely saw the field before hitting injured reserve. However, Casillas is owed more than $3 million in 2017; barely any of that is dead money. Thomas’ release could save the franchise another $3 million off next year’s cap as well.

On the offensive side, running backs Shane Vereen and Rashad Jennings are similar cases. Together, their releases would save the Giants more than $6 million. Both are good players, especially Vereen when healthy. However, last year was a perfect example of why Jennings cannot be relied on to carry a rushing attack and why relying on Vereen is a questionable practice as well.

These aren’t easy decisions, specifically with effective players like Casillas and Vereen. However, if it comes down to retaining an oft-injured third-down back or being able to re-sign Johnathan Hankins this offseason, one move would seem to preclude a larger impact than the other.

That brings us to the final potential release: Pro Bowler Dwayne Harris. Fans love Harris; coaches love him. This season, he was named the best special-teams player in the conference. And yet, is he really worth $12 million the next three seasons? His contract seemed high when the team signed him in 2015, and it still feels like an overpay. His return skills are worth something, but it isn’t this. $2.4 million of his 2017 salary is dead until June 1st, when that figure dips to just $800,000. Summertime might be the time to jettison Harris for a better use of that money.