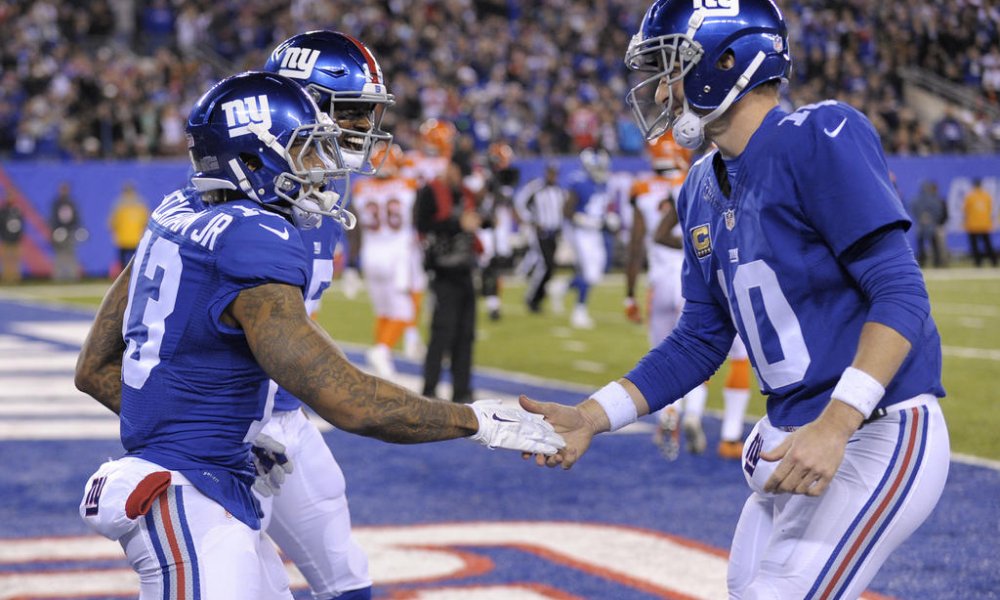 Despite the narrative surrounding both units, the offense of the New York Giants actually ranks better than the defense. That’s how a supposed playoff team starts 1-6.

The New York Giants have the worst record in the NFC East. They have the worst point differential in the conference outside of the West. Things have not gone well, and heading into their Week 8 bye, the season is pretty much over.

Most casual observers and even die-hard fans rightly notice the dumpster fire on the offensive side of the ball. The offensive line is a disaster; the running backs are no good; Eli Manning is past his prime; and every wide receiver worth his weight is on injured reserve. The offense is terrible.

Interestingly, through seven weeks, the offense of the Giants remains statistically better than the vaunted defense! It is pretty astounding, not how surprisingly good the O has been, but how incredibly bad the defense is.

ALSO ON BUZZCHOMP: Golden State Warriors or the Field in 2018 NBA Finals

According to DVOA, New York ranks 20th in the NFL in offense and just 24th in defense. This NYG defense that was second in the league a year ago, now ranks behind the likes of the Jets, Dolphins, and Chargers. Things have been really, really bad. For a breakdown of some of the missteps from Week 7, check out our PFS film review. But this unit has drastically underachieved all year.

Things aren’t any better in terms of yards per play. Once again, the NY offense is solidly below average, ranking 22nd in the league. And the defense is worse, ranking 24th in the same category. (Last year, NY was seventh in opponent yards per play.) The only way the Giants offense would be better off is if it was facing the Giants defense on a weekly basis.

Coming back from the bye week, there isn’t much that can happen that will improve the offense. Odell Beckham Jr., Brandon Marshall, and Dwayne Harris are all out for the season. The offensive line can’t acquire a Pro Bowler. Paul Perkins isn’t any better than Orleans Darkwa or Wayne Gallman. In fact, even when healthy, he has been worse. The only addition coming is Sterling Shepard’s return. This offense is going to remain in the bottom third of the league.

The defense is a different story. Though Olivier Vernon has been out, the rest of the unit that was so good a year ago is here and playing. There is no logical explanation as to why everyone is worse 12 months later. Where has the pass rush been? Why is the secondary so bad? What is going on with Dominique Rodgers-Cromartie and the coaching staff? Can any linebacker prove his worth? All that is rather demoralizing, but it also could mean an improvement is coming as players’ talents start to show through more than they have.

Of course, things don’t get easier in the season’s second half. Besides a game against San Francisco, the Giants have to face a top-15 offense in six consecutive weeks. Of their nine remaining opponents (counting two against Washington), they face a top-10 offense an alarming six times, including the NFL’s best offense, Kansas City. It has remained puzzling all year that the Giants have a better offense than defense, and that may remain true until the end of the season.

More NFL: New York Jets are What We Think; Sloppy