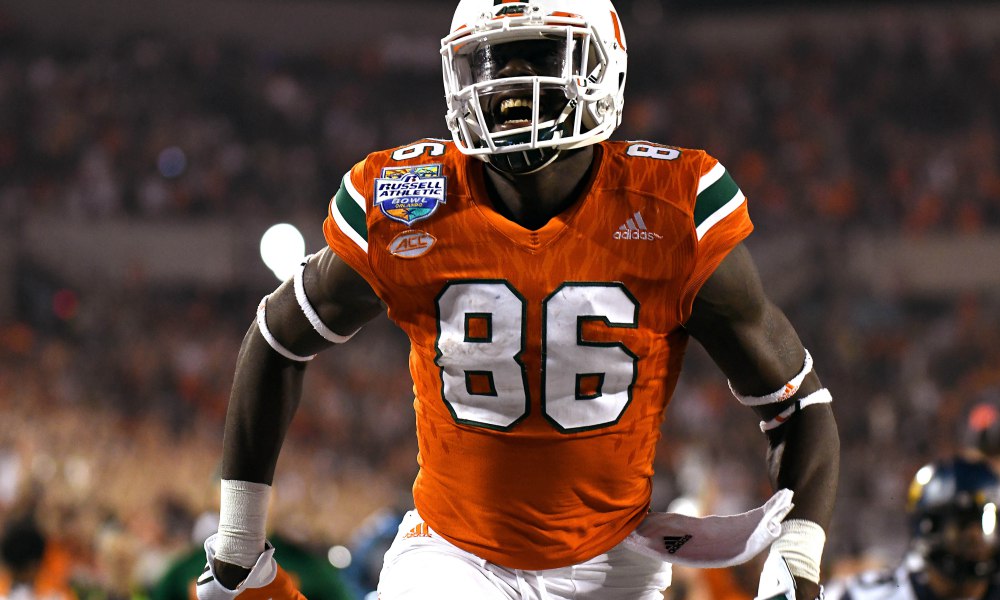 The New York Giants have the 23rd pick in the first round of the 2017 NFL Draft. It is anyone’s guess who the team will select. Here is a rundown of predictions from some of the top sites around the web.

Just a month remains before the 2017 NFL Draft in Philadelphia. The possibilities of where the New York Giants will turn with the 23rd pick in the first round are numerous. Mock drafts and analysts around the web have New York grabbing offensive linemen, running backs, tight ends, defensive linemen, and linebackers. There is no telling what the pick will be when the time comes. Here is a rundown of what some of the top sites around the web see the Giants doing with that first pick.

Njoku is the guy most feel is the second-best tight end in this draft. SI had O.J. Howard (the top tight end) being selected much earlier, at eighth overall. In this scenario, Njoku dropping to the Giants would be somewhat fortunate. The difference between the two players isn’t much. Howard probably has the higher ceiling and more well-rounded game, but he also is just as capable of busting.

Bucky Brooks has the top three tackles in the draft all being taken between picks 20 and 24, with Ramczyk falling in the middle of Garett Bolles and Cam Robinson. Ramczyk’s unsteady background (between Division III and taking a year off) may turn some teams off. It is hard to say whether that is dropping him to the back-end of the first round or whether this is his value anyway, and a team that likes him won’t care about those uncommon steps.

ALSO ON BUZZCHOMP: Justice League is The Avengers for the Slow and Unfunny

They had New York taking quarterback DeSean Watson in this spot for much of the offseason before flipping to Njoku. Watson would be a fascinating selection for obvious reasons. I would actually prefer the Watson selection to tight end. I don’t believe any of these top tight ends are A) better enough than the later-round picks to warrant the first-round selection and B) have the all-around skill set (from route running and catching to blocking and technique) that New York’s current tight ends also lack.

They say Ramczyk could slot in immediately at left tackle, moving Ereck Flowers to the right side. This is the scenario that all Giants fans hope for, but color me dubious that Ramczyk is any better slated to being a Week 1 starting left tackle as a rookie than Flowers was. Not only is he low on experience, but he also can show major lapses in technique, which is essentially the same thing that befalls Flowers.

USA Today agrees that Bolles is the top tackle prospect in the draft. While other mocks have him off the board by the time the Giants pick at 23, he is available here, and thus taken.

Fox’s mock draft is a bit out-of-date. It sites Jason Pierre-Paul leaving as the reason for New York to go with Charlton in this scenario. That under sells Charlton’s ability and usefulness to the club. Even with JPP signing a new long-term deal, there is a need for another rusher on this team. The downside of Charlton is scouts’ belief that he doesn’t have the power or flexibility to successfully shift inside in certain formations.

These mock drafts will surely change again before the end of April. We will keep you up to date on where the most popular publications have the Giants turning in the first round of the NFL Draft.