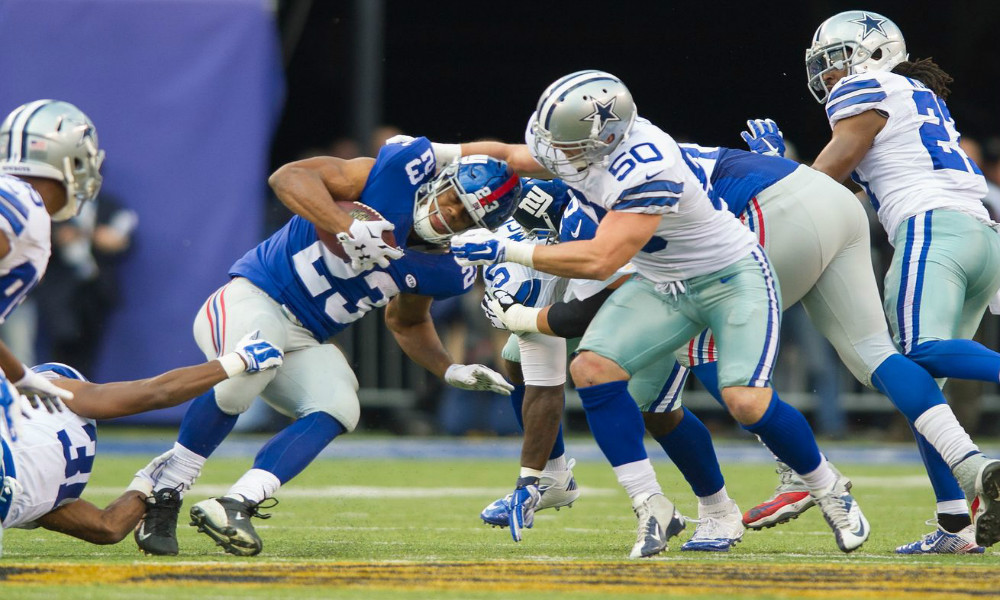 The New York Giants are 1-0 heading into NFL Week 2’s game against the New Orleans Saints. The end of Week 1’s game went New York’s way, but the Giants could have given themselves better odds at winning.

With one minute and 12 seconds remaining in Week 1’s game against the Dallas Cowboys, the New York Giants made a queer decision that got swept under the rug because of the result of the game. They decided to voluntarily give the ball back to Dallas with a chance to win the game rather than just win the game themselves.

No one cares at this point because we know how the game finished: Dallas drove a good distance down the field, but had the clock run out on it when Terrance Williams chose to go for some extra yards to get in field-goal range rather than going out of bounds. Time expired and New York won 20-19.

ALSO ON BUZZCHOMP: The Simpsons Will Be Busy This Fall

But less than two minutes before that, the Giants faced a fourth down with 1:12 remaining. They had the ball on the Cowboys’ 37 yard line with one yard necessary for a first down. Here were the two options, the second of which seemingly no one even considered, including the announcer and analyst calling the game.

The reason option one was chosen is because it’s always the choice NFL head coaches make; the safer option. If NY had lost the game, the decision to punt would not have been pointed to. The loss would have fallen on the shoulders of the defense that failed to stop Dak Prescott and the Cowboys from driving down. Punting was safe, but it was also the wrong decision because of exactly how the game played out.

New York’s punt didn’t drop Dallas inside its own 10 yard line because that is kind of hard to do. Instead, it went into the end zone, moving the ball just 17 net yards from where the line of scrimmage was on fourth down. Seven seconds went off the clock and Dallas had over a minute to travel 40-odd yards to get in Dan Bailey‘s field goal range for the victory. Still hard but not implausible or impossible.

The upside of option two was far more favorable to New York with the downside hardly being worse than what happened with the punt. Going for a fourth-and-one conversion is less than a 50-50 proposition most of the time, but the odds were better against Dallas’ poor defensive line and with how the Giants were running the football to that point. But even if you give them a low chance of converting, gaining one yard would unequivocally win the game. The team would enter victory formation and kneel out the clock. One yard for the win.

If they failed to convert, Dak and Dallas would have been in the same situation they were placed in, just 17 yards further up field. That trade-off was certainly worth the risk since the trade-off on the choice to punt was not. The best scenario when punting was pinning Dallas deep but still giving it the ball with about a minute remaining with the opportunity to win the ballgame with just a field goal. That was the best-case scenario.

According to Pro Football Reference, Dallas’ win probability dropped from 29.45% before the punt to 26.24% after the punt. That is hardly the gain the Giants would be looking for when the alternative was so enticing: gaining one yard would raise New York’s win probability from 70.55% to 99.99% (since the possibility of fumbling on a kneel down exists).

Everything worked out for New York, partially because Dallas screwed up. In the future, I would much rather see a team win the game for itself with such a task as gaining one yard rather than relying on the opposition to come up short.

More NYG: Giants Should Be Worried By Broncos Win