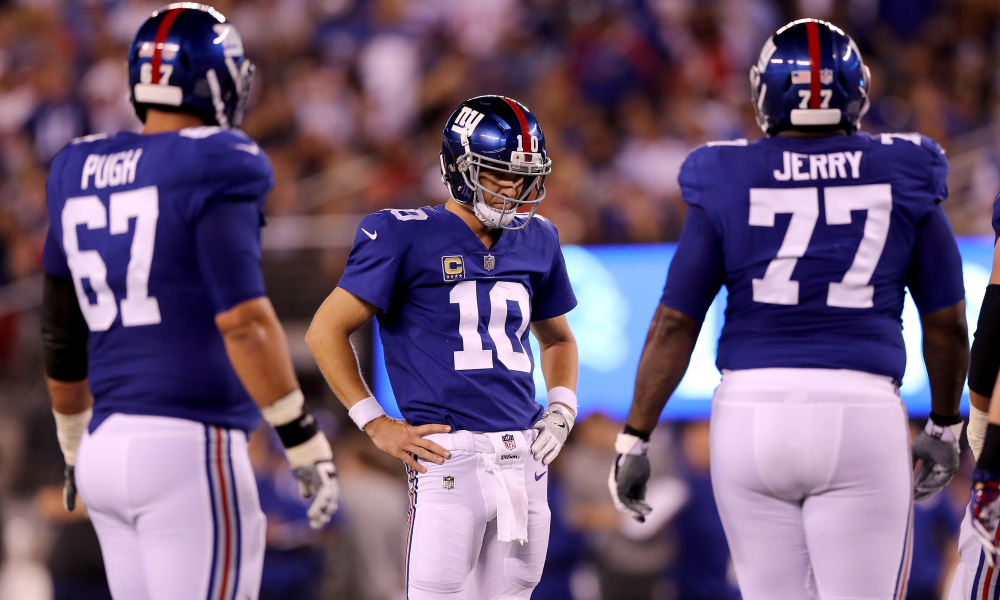 Early 2018 over/under win projections are out, and the New York Giants are tabbed as one of the bottom-feeders of the NFL. This undersells the talent on this roster, and will only come true if Big Blue commits to a full rebuild.

It’s never too early to look ahead to next season, especially for teams that have long been eliminated. With that, ESPN projected win totals for the 2018 NFL season as we head toward the final two teams of the 2017 season. As one would expect, the Cleveland Browns were marked with the lowest over/under win total in the league, and the New England Patriots were given the highest projection. In the middle is where all the drama unfolds.

With the fourth-lowest win total, the New York Giants were tabbed for six wins next season. The only teams projected to be worse are the Browns, Jets, and Colts. This is a weird quartet to begin with, especially if Andrew Luck returns to action, but the Giants’ placement in the bottom four feels wrong.

New York was certainly terrible this season. The offense was atrocious, thanks in part to major injuries, but also because of poor roster construction. The defense was just as bad, though it felt like an aberration. The defense was bad for non-football reasons almost. Defensive coordinator Steve Spagnuolo was forced to dumb down his system in 2016, which led talented players to produce the second-best defense in the league.

A year later, Spags was let loose to get crazy, and his confusing sets…confused the defenders. They were out of position and played out of sorts. Then the secondary members quit on Ben McAdoo, and the linebackers all got hurt. Then the pass rush probably just gave up. This was a death spiral into a terrible season, but it really had nothing to do with the talent on that side of the ball. A bounce-back should be expected, let alone hoped for.

The offense could also be expected to bounce back, mostly because of how bad it was in 2017. But if nothing else, a healthy Odell Beckham Jr. makes this team vastly different. The rest of the receivers corps should be healthy as well, which adds a completely different factor to the attack than what Eli Manning was forced to play with this past season. The running game is still invisible, and the offensive line is still one of the worst in the league. But a veteran passing attack and quality defense is worth more than six wins in the league. In fact, those are the factors that led people to think New York would challenge for a division title and possibly a Super Bowl berth this very season. Those things are still here.

I suppose a six win prediction splits the difference between that scenario and the other logical possibility: the New York Giants draft a quarterback second overall in the 2018 NFL Draft, jettison Manning, and rebuild. That team won’t win six games. The other version could bounce right back into the playoffs. In January, it is hard to know which direction the team will go. Even if it drafts a QB second overall, a rebuild isn’t required. The organization could allow that player to learn under Manning as he guides a veteran club.

There is no telling how GM Dave Gettleman will handle his new employees. But if you give the Giants a baseline of simply trying to win in 2018, six wins seems low. We will know more as the offseason progresses.