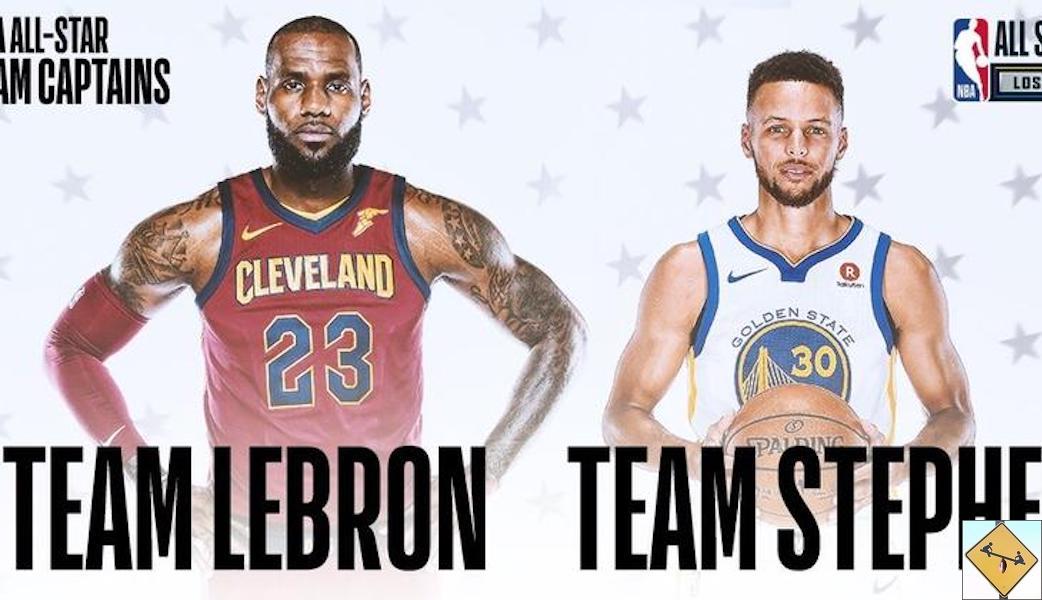 The NBA All-Star Game is holding a fantasy draft to pick teams, but fans won’t see it. WTF. How can we make this amazing idea ACTUALLY fun?

The starters for the NBA all-star game have been announced. All that’s left to do is draft the actual starting lineups! Except the draft won’t be televised, and fans won’t know who was taken first or last or anywhere. Also, the captains (LeBron James and Steph Curry) are only allowed to select starters from the list of actual starters, so there isn’t really much to this at all. The NBA somehow made the best all-star idea, a fantasy draft with real players making the selections, and ruined it as much as it possibly could. Nevertheless, there are interesting ways this could play out.

LeBron has first pick because he garnered the most overall votes. The eight players he has to choose from are Kyrie Irving, DeMar DeRozan, Joel Embiid, Giannis Antetokounmpo, James Harden, Kevin Durant, Anthony Davis, and DeMarcus Cousins. Those are all good players, but it seems blatantly obvious that James needs to select Durant first. That would mean the Golden State teammates would have to face off against each other. It would also give James – the best player in the NBA – the second-best player in the league on his squad. From there, I really don’t know who Curry selects second. Everything hinges on that first pick. If James balks and takes Harden or Davis or even Giannis, then the rest of the draft trickles out without excitement. It doesn’t even matter who is taken last (obviously DeRozan!) because the captains are only choosing from the pool of starters. The NBA is acting very NFL-ish with these no-fun rules.

How do we fix this?

The obvious change is to have the entire all-star roster announced and let captains draft straight through with no restrictions. How far would DeRozan – a nominal starter based on voting from fans, media, and players – fall? He is really good, but his best skill is probably getting to the free throw line and hitting foul shots. *Yawn* He’s Harden if Harden wasn’t as good of a passer or a shooter and had worse shot selection. And how far might Cousins fall if no one wanted him on their team? And how long would LeBron leave Kyrie on the list of available players if Steph kept passing over him as well to see when LeBron would break? It would all be so much fun!

Which brings me to necessary change number two. We clearly need to see and/or know how the draft plays out. Otherwise, this entire thing is worthless. The NBA is usually ahead of the other sports in optics, so this is a rare misstep for it. For a sport that continued to televise the shooting stars challenge for years during All-Star weekend, and actually, legitimately televises the ping-pong ball announcement of the order for the NBA draft lottery, it is unfathomable that the all-star lineup draft is not on the schedule.

Someone must have complained. One owner, or a collection of owners, protested to the league on behalf of its superstar player in order to ruin the fun of this fantasy All-Star draft. I have no idea which player, but one of them wanted this off television. They must have been afraid of who would say what and bad blood spilling over. Perhaps the NBA itself was afraid of such an altercation. After the Rockets breached the Clippers locker room for god knows what stupid reason, this is not so far-fetched. Contempt exists among the NBA stars once again!

That is my logical side attempting to rationalize an egregious decision to ruin a good idea. So how do we fix things? How does the NBA All-star game fantasy draft actually be as amazing as it sounds? You nailed it by forcing the captains to pick full teams from every all-star, with all of it on TV for fans to enjoy. It would have an NFL draft air to it, with the added bonus of being unpredictable. I’ll add the following wrinkles to our fantasy draft going forward.

Allow the team captains to pick one wildcard player from the entire league. This player must not have been already selected as an All-star. The captains would make this pick prior to the fantasy draft itself, and if both captains happen to choose the same player, then they must shoot free throws until one misses. They would need a backup choice for this scenario, but I love this! It gives the two best players in the NBA a chance to see something in a player that no one else saw. There are so many amazing ways this plays out. We need a wildcard.

The NBA All-star Game fantasy draft also needs a veto. Each captain can veto the pick of their opponent once. That player then returns to the pool of talent, but can’t be picked for another two rounds. This adds another element of fun to the proceedings. More fun is good. What we are getting in 2018 is not.