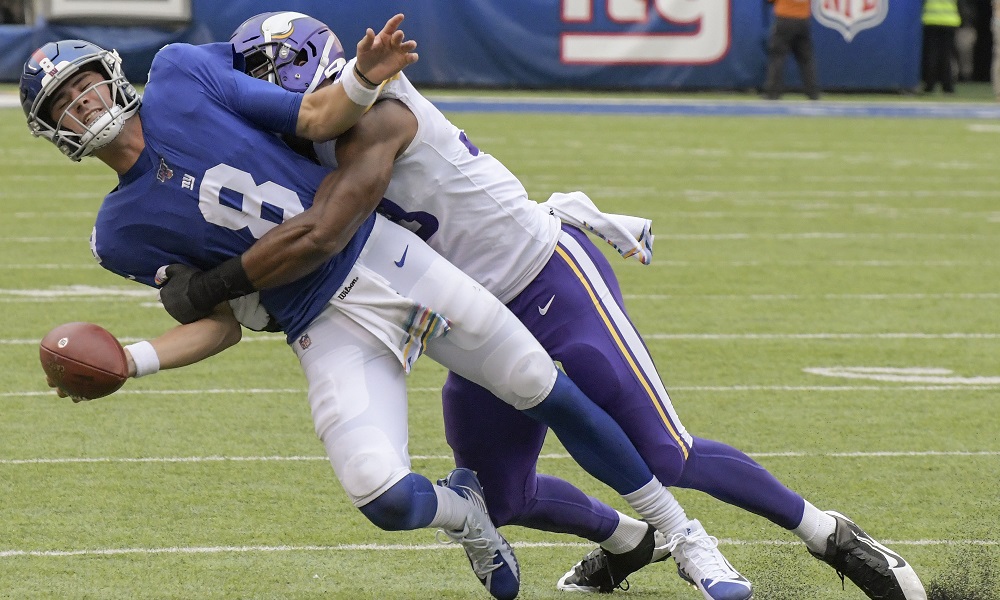 Predictable football stinks, especially when your team loses. The New York Giants failed against the Vikings in a manner everyone saw coming. WTF.

All week long in the lead up to the New York Giants versus the Minnesota Vikings, the story around the NFL was about Adam Thielen. He called out his quarterback Kirk Cousins for not throwing the ball. Then Cousins apologized on his podcast, so what do you think happened on Sunday? The flow of this game was completely predictable. We knew the Vikings would throw a lot, and we knew exactly where the Giants were vulnerable. Cue the loss for Big Blue.

Before we get into New York’s true colors, or lack thereof, its worth noting that the Giants were down a few key players against the Vikings. It somehow got worse with Gallman getting a concussion on the first series of the game, so New York’s run game was basically non-existent. But now I’m complaining, and we didn’t play well enough to warrant complaints.

This was Golden Tate’s first game back from suspension, meaning he had yet to gain a rapport with Daniel Jones. It showed as he played 40 of 62 offensive snaps and only recorded three catches for 13 yards. The real issue was the defense, but this was predictable. When playing an actual football team, unlike Washington, the Giants’ defense plummeted back to Earth. The Vikings have a great running game behind Dalvin Cook, which New York could not stop. Cook put up 132 yards on 21 carries. Minnesota also has Pro Bowl receivers which Cousins promised to use. He did and the Giants predictably couldn’t stop them. Adam Thielen notched 130 yards and two touchdowns, while Diggs put up 44 yards of his own. This was more than enough to beat Big Blue.

New York’s defense was over-matched, so let’s not kill them completely. Instead we can admit the truth. The Giants kept the game close into the second quarter, but are not good enough to hang with a true playoff team. Jabrill Peppers saved a touchdown by punching the ball out of Cooks’ hands and forcing a turnover, only to watch his offensive give up a safety on the very next play. Tack on another field goal after a Giants’ punt, and it was a rather insurmountable 18-7 score at halftime.

Also on BuzzChomp: R.I.P. forever on The Deuce Season 3

New York’s lack of weapons truly began to show in the second half. The Giants got the ball first and went on a 15 play, 61-yard drive that took 7:25 off the clock, but ended with a field goal. Actually, New York scored two field goals because on the first attempt the Vikings were hit for an unnecessary roughness penalty that put the ball on the 5-yard line. The Giants then squandered their second chance without Saquon Barkley to punch it into the endzone.

Overall, the Giants were able to move the ball on Minnesota but lacked the playmakers to score points. Daniel Jones had the worst of his three starts, going 21/38 for 182 yards with 1 TD and 1 INT. He also missed a wide open Sterling Shepard in the endzone on the first drive after halftime. Games like this are necessary learning experiences for Jones to continue developing into a winning quarterback. But what about the rest of this season?

Bad news is on the horizon, because next up on the schedule are the defending Superbowl champion New England Patriots. They essentially had a preseason game against Washington on Sunday. Needless to say, New England will be well rested. The good news is that Barkley may return, which will provide a much needed shot in the arm for our offense.

Barkley or no Barkley, playing the Patriots will be no walk in the park for the Giants. Anything other than a loss will be a major surprise. Everyone needs to be on top of their game with zero mistakes. Just show us a competitive game and something to build off of, because after this game the Giants welcome what many feel is a bottom three team in the league. The Arizona Cardinals come to town, a perfect game to right the ship.