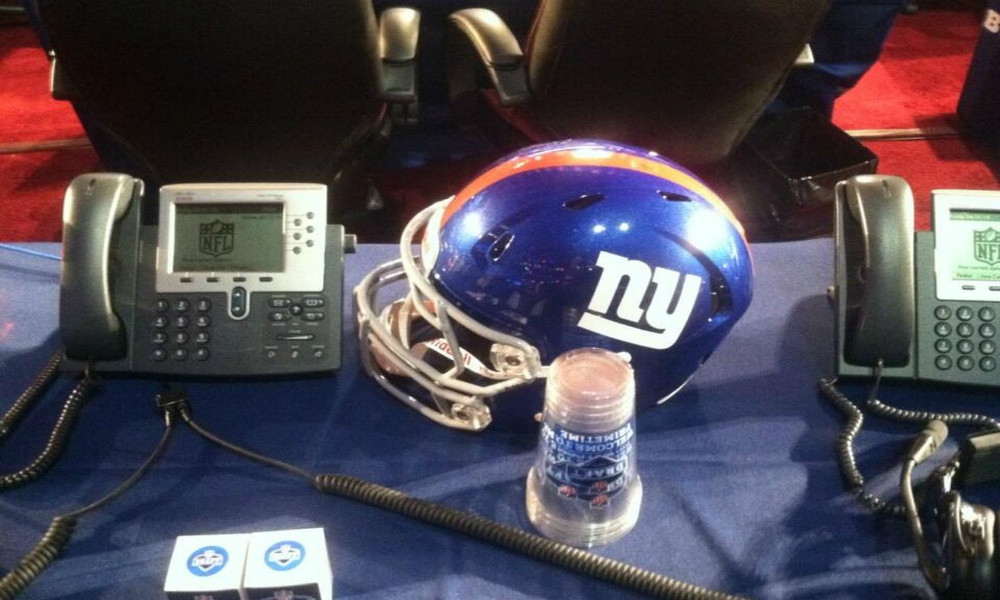 The New York Giants will be on the clock for the 2016 NFL Draft soon enough. Starting with the vital position of pass rusher, here are some of the players the team should be targeting when its pick comes up. (Photo Credit: bigblueview.com)

Last week, I touched on a handful of players that belonged on the New York Giants’ 2016 NFL Do Not Draft list, AKA players the team should avoid, specifically with its first-round selection, 10th overall. Today, it’s time to turn that negative into a positive of sorts by singling out players the Giants should be going after with their top selection come the end of the month.

We will start with one of the premiere positions in this year’s draft, pass rusher. Just because the team spent a large chunk of its cap on a defensive lineman through free agency (Olivier Vernon) does not preclude it from adding another elite piece at the position. Depth is crucial to the success of any team, specifically at a need such as pass rushing off the edge.

Ohio State’s lineman Joey Bosa is the top defensive end on most draft boards. DeForest Buckner out of Oregon is not too far behind. New York would be elated to select either player, but both will surely be gone by the time NY selects at 10. The best fit of projection and selection is Clemson’s Shaq Lawson. Lawson is a physical, power rusher with a lot of upside. He never really started for the Tigers prior to this past season, which has to be a concern because of the lack of tape and experience. But 2015 was good enough to propel Lawson into the early first-round conversation when combined with his duty as a substitute the years before. He collected 12.5 sacks and 24.5 tackles for loss as a junior in ’15 and was one of the main reasons Clemson reached the College Football Playoff.

Leonard Floyd is another possibility at the position. Floyd was a linebacker at Georgia, but he is a pass rusher regardless of the label. He would be perfectly suited to play 3-4 outside linebacker but would also find plenty of work in a 4-3 scheme. He is not an adept coverage man, which lends him to moving toward the line of scrimmage where he is a force. Floyd is quick and fast off the edge with the ability to get around the corner or chase in pursuit. He is thin right now and would need to bulk up if he were to switch to strictly playing on the line of scrimmage as a defensive end.

A couple more players have first round grades as pass rushers. They are rated a bit lower than this previous bunch, but who knows how the Giants rank these folks and how the players do in interviews, etc. Lawson’s teammate Kevin Dodd, obviously also from Clemson, made bigger improvements during his time as a Tiger than Lawson. He was also arguably just as good this past season, wrecking havoc in the playoffs and accumulating 12 sacks and 23.5 tackles for loss. Noah Spence had no such platform to unveil his skills coming out of Eastern Kentucky, though he was previously a member of Ohio State before being banned for drug test failures. His decision to continue with school was a good one as he was named an FCS All-American this past season. Somewhat ironically, the fact that his off-field issues occurred already (and he supposedly got past them) is more valuable than if he was entering the world of “questionable character” right now, a la Robert Nkemdiche.

Lastly, we come to Emmanuel Ogbah out of Oklahoma State to finish out the group of potential pass rushers for the Giants. Ogbah may be graded closer to New York’s second pick than its first depending on who you ask, but again, it depends on how the Giants see him. Ogbah is a powerful dude with a good body and is more of a bruiser than a guy who will get around the edge with quickness. His inconsistent effort and production make him one of the higher risk, boom-or-bust prospects of the early part of the draft.