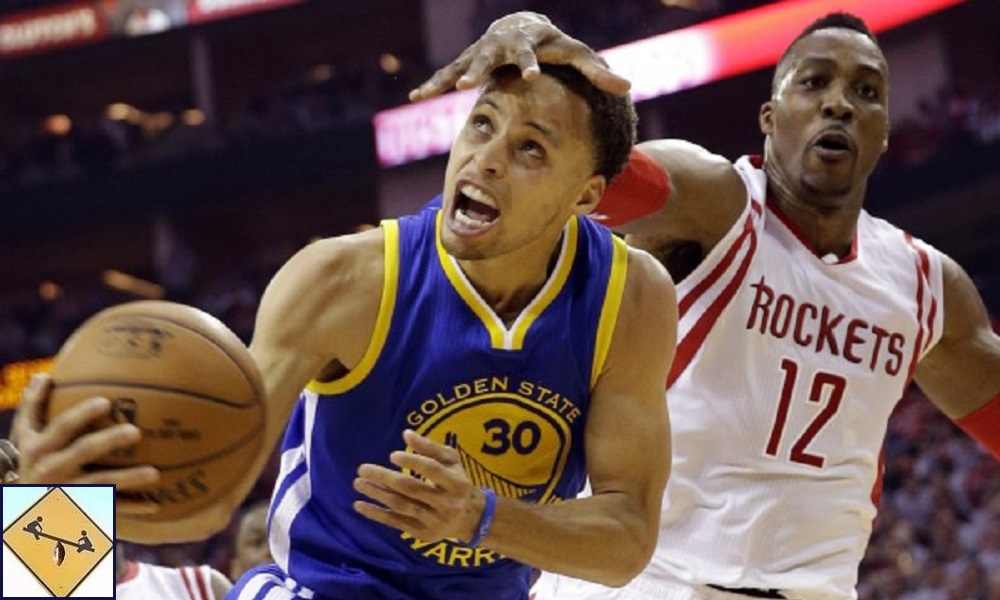 Will Indiana top the Raptors? Is Curry’s injury legit? We go fishing for excitement in round one of the NBA Playoffs 2016. Balls to the wall.

We are just about through the first round of the NBA playoffs. In some respects, these series have gone exactly as we predicted; i.e. they’ve been boring as hell. We didn’t think there would be much in the way of competitiveness or upsets in this first round prior to the postseason, and that has been born out more or less.

In the West, San Antonio had no problems with Memphis, easily dispatching the Grizzlies in four games. Oklahoma City is up 3-1 in its series, just slipping up once in an ugly Game two loss. Otherwise, the Thunder have housed Dallas. The Warriors are up 3-1 as well, though their series with Houston has been more interesting simply because of the injuries to Stephen Curry. Golden State played without Curry twice and lost him halfway through the other two games. It will probably advance whether Curry takes the floor again in this series or not, but the Warriors’ ceiling is suddenly constricted moving forward. Forget sweeps; they may not even make it out of the second round if Curry can’t go.

The Cleveland Cavaliers took care of their business in the opening round as well, advancing past Detroit in a sweep. Outside of toss-up series between the 4-5 and 3-6 seeds in the East, the biggest question all playoffs has been the Toronto Raptors. They can’t generate offense against the Indiana Pacers’ defense. Both Kyle Lowry and DeMar DeRozan are shooting terribly from the floor, and Toronto has few other places to turn for points. I thought Toronto had the best chance of any Eastern team to unseat the Cavaliers. Maybe they still do and this Pacers series is just a bad matchup because of the defensive assignments, but the Raptors are in real danger of not advancing out of this first round, adding another entry to their playoff-failure ledger.

In a general sense, there have been a ton of blowouts, even in the series that are close, like Miami versus Charlotte. Whoever wins seems to win in a blowout, which makes for terrible television. But we were expecting a lackluster first round anyway. The intrigue of the Raptors series, along with the injury to Curry, have livened up this first round. I suppose the real question is does either or both of those points change the future of these playoffs in your mind?

After a historically interesting regular season, it’s a shame we are forced to fish for excitement in the first round of the NBA playoffs. It’s a phenomena unique to the NBA. The NFL, NHL and MLB playoffs are all hot and competitive from the get go. It’s a rare first round series that falls flat in any of the other major sports, yet we expected this from the NBA. We knew the best teams would man-handle the less talented competition in round one. Perhaps its the lack of first round byes, which the Warriors are wishing they had right about now, but one way or another, I find only three things exciting in the first round thus far.

I’m excited that the Pacers are pushing around Toronto. It’s not simply that I picked this upset prior to the playoffs getting started. I like Indiana and do not care for the Raptors. Toronto has yet to shake its aura of futility, making it hard to root for them. Conversely, I love that the Pacers are back making noise in the playoffs. Its only first round noise, but at least its something.

I’m excited that the Celtics have rallied after losing Avery Bradley to injury. The NBA is more fun when the Celtics are finding some playoff success, and when Bradley went down I counted them out. The series felt over, yet Boston is still fighting. When all of the best teams have nearly swept aside their opponents, its fun to root for a squad who’s overmatched and undermanned. The Celtics might just surprise some people, including the Hawks, by winning their round one series.

I’m most excited to see all of the best teams advancing. The real fun of the NBA playoffs is coming in round two and beyond, but if any of the top teams hit a snag and get upset, we as fans lose out. Cleveland and San Antonio took care of business. The Thunder, Clippers and Warriors now must do the same. I want to witness the Western Conference battles. I want to see the Cavaliers face off against whichever first round Cinderella team advances. This is what’s truly exciting.

Now for the elephant in the room, Stephen Curry’s injury. I wish I was surprised, but after going balls to the wall to get the all-time wins record, it’s no shock that Curry is getting some bumps and bruises in the playoffs. Thankfully his team is outstanding and can advance without him on the court. The Warriors can win their second round matchup as well, with Curry on the bench, but the rest of the team will suffer. He’s their obvious x-factor. A lack of Curry means added minutes and pressure on everyone else. The team gets more beat up because they don’t have their leader. Round two is going seven games for Golden State minus Steph. Hell, round one might go six games. But none of that matters. Curry needs time to rest and heal up. A longer first round series could benefit them in that regard.

I think we all want an NBA Finals rematch of last season, to see if the games can live up to the hype. To see if LeBron gets Cleveland a title. To see how much Irving takes over, or how much Curry can shut down the Cavaliers. Yet the really exciting thing is, all of these upcoming matchups are excellent. No need to keep fishing after round one.