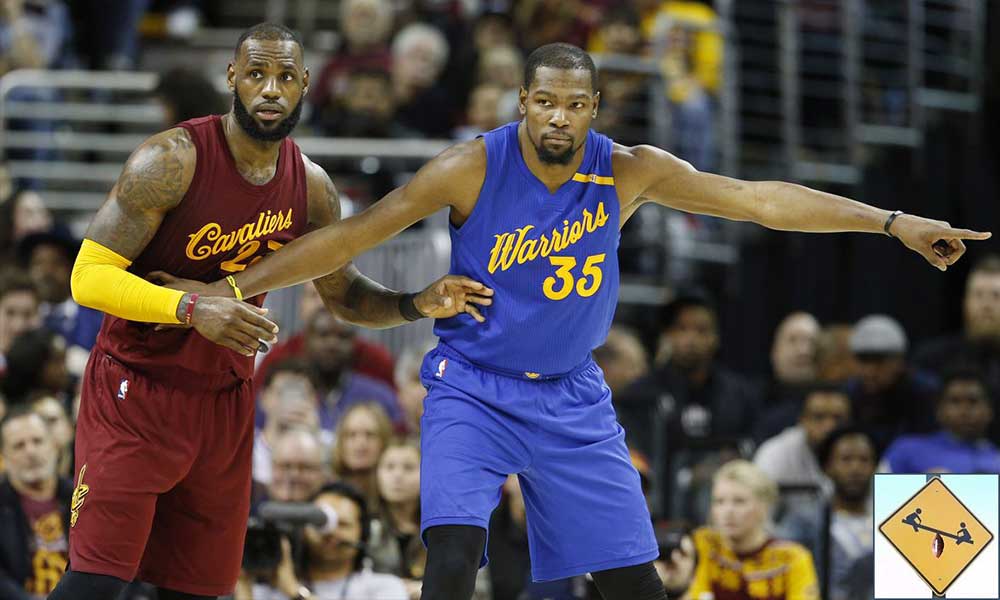 In what’s shaping up to be a best of five, round four of Cavs versus Warriors is all about LeBron James. Never count out the king. The NBA Finals 2018 are his to lose.

It took much longer than we expected in terms of games played. It wasn’t the smooth ride through conference finals we expected. Each team wasn’t even favored to win its own conference at one point or another. And yet, through all that consternation, we are still left with Golden State versus Cleveland for the NBA Finals 2018.

I want to say that only the East’s outcome surprised me, but both conference finals were surprising. In the East, LeBron James and the Cavaliers seemed to be battling uphill against Boston all series. They were down 3-2 with a game seven in Boston looming. James was also playing much of this postseason without Kevin Love operating at full strength, and then playing without him entirely. It was a miraculous series win in all aspects, even with the Celtics down their two most talented offensive players.

ALSO ON BUZZCHOMP: NY Yankees Using AAA Like No Other Team Before

For the first time in his second run with the Cavaliers, I doubted James’ ability to carry this roster to the Finals. I didn’t think they would make it. This, it turns out, was wrong but wasn’t venturing very far out on the limb. After all, the team needed to win game six at home and game seven on the road to continue LeBron’s streak of eight consecutive NBA Finals appearances. With the defense ratcheted up and, perhaps, the young pup Celtics feeling the pressure, Cleveland held the home team to 79 totals points in that clincher.

In the West, things went according to plan with Golden State vanquishing Houston, but things here were trickier than expected as well. I never expected the Rockets to prove so much of an issue for the Warriors. There is an argument to be made that Houston would have won the West had Chris Paul not gotten hurt.

What Houston did was constantly pick on mismatches out of switches and switched everything itself defensively. The ironic thing is that the Warriors did pretty much the same thing but looked worse doing so. Kevin Durant played a pretty bad series for his talents. He was iso-Harden but a worse version who refused to pass to teammates consistently enough. And while Golden State looked to attack mismatches off switches, the Rockets depth chart supplied fewer mismatches than the Warriors’. The Golden State roster suddenly looked very top-heavy and lacked wings to a nearly detrimental degree.

In the end, the Warriors squeaked things out thanks to a historically bad shooting night from the Rockets in game seven. Had Paul been there to settle things down, the outcome may have been different. Either way, this series felt like a toss-up, which isn’t at all what I expected. Houston’s most successful move was making the Warriors play like it. The ploy almost worked.

I wouldn’t be surprised to see Golden State resort back to sharing, selfless, unstoppable offense in the Finals. If that is the case, Cleveland hardly has a chance. But the Warriors could continue to look lethargic, in which case, we can never count out the king, even as his supporting cast looks weaker and weaker.

It’s incredible how the NBA continues to make fans question themselves and the teams they know to be the best. Or perhaps its odd how the league keeps reinforcing our preconceived notions of who is best. We have Cavs versus Warriors for the fourth straight season in the NBA Finals 2018. Either Golden State wins three of four and goes back to back, or Cleveland continues the seesaw and evens the series in what appears to be a best of five in the NBA Finals.

As a fan, I’d prefer to see the Cavaliers and King James even this all-time great rivalry at two NBA Finals wins apiece. Golden State going back to back and taking three of four diminishes the incredible event taking place, the same two teams playing for the title in four straight years. It crowns them king before it’s all over. I want LeBron to even the series. This makes the potential/likely rematch for year five all that more exciting. Is this what is in store for the NBA?

No one gave Cleveland much of a chance to get this far after they traded away Kyrie Irving. The Cavs were counted out all along and even more so against Boston. This is only a slight exaggeration, but to EVER count out LeBron is foolish. Golden State is not a prohibitive favorite. Neither team got any rest. Both played dramatic seven game series, but only the Cavs won by playing their game. The Warriors made the blunder of playing their opponent’s game. That is usually a recipe for losing, but they are great enough to still have won. It’s odd that the defending champs gave in to their opponent, so what’s stopping them from doing it a second time versus Cleveland?

This series feels like destiny, LeBron James’ destiny. He willed his team back to the NBA Finals 2018. The only opponent he truly wanted to face were the Warriors, so that he could revenge last season’s loss and even their all-time series at two championships each. Now James gets Golden State. The Cavaliers win in seven games.