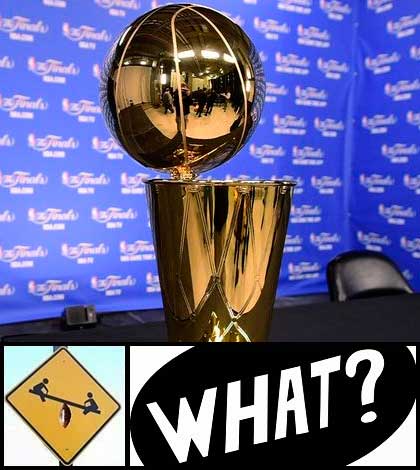 The Golden State Warriors are champions, so what is LeBron James to do? Stick out his tongue of course! An NBA Finals 2015 rebuttal of What ha… happened? Real photos, unreal answers.

Congrats to the Golden State Warriors. We have ourselves an NBA Champion and a surprise Finals MVP. LeBron James is even more “the man” than ever before, in a losing effort none the less.

I present to you the following evidence of his uncanny ability to entertain on all levels. This beauty is from the 2012 NBA season. But what ha… happened?

Photo: You call THAT a tongue

Michael Jordan made his tongue famous, flaunting it as he dunked in legendary fashion. LeBron didn’t ask for the comparisons, he just keeps shutting down the haters by tearing down Jordan’s records. Who’s tongue is greater? It would seem that title belongs to King James as well.

If that’s the case, why the sudden bout of show boating? What ha… happened?

Catching LeBron James on camera is becoming a playoff-tradition. First there was this tongue practice, then James was literally caught on the camera during the 2015 Finals and received a huge gash on the top of his head. And there was another…eh hem, less publicized (depending on which websites you browse) incident of the ABC cameras peering in on a Cavaliers huddle and catching James with his pants down as he tucked in his jersey.

The man may be the best basketball player in the world, but he isn’t too shabby in the TMZ sports department either. I like that this shot of LeBron from 2012 shows his great leadership even in times of defeat. The team is down 17 points in the waning seconds yet he still is able to show his teammates how to properly keep busy. Notice his teammate going to the tongue as well after seeing the King get to licking.

I also like the idea that James practices his Jordan tongue action. He is an animal that went from a zero on the block to being one of the best post scorers in the NBA in less than three years. So why can’t he also practice his Jordan tongue with the same vigor? Next year, look for LeBron to start doing something with his tongue on dunks. He’ll have the move down by then.

More Sports: Where was the NBA Finals defense? What happened?