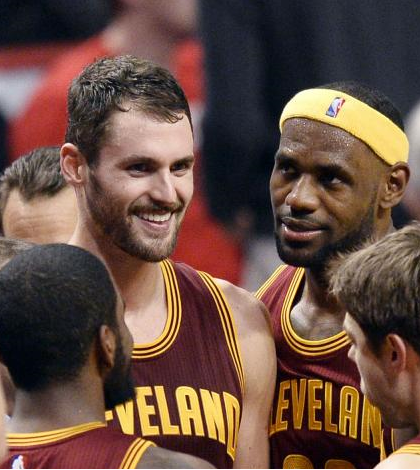 The story on Kevin Love of the Cleveland Cavaliers flipped faster than anyone could have imagined. Here is where things stood just a few months ago, prior to the 2014-15 NBA season getting underway.

Love was thought of as one of the premiere players in the entire league, regardless of position. He was certainly one of the top few power forwards, averaging 19.2 points and 12.2 rebounds per game during his half-dozen years in Minnesota. There were small inklings that Love may be a good-stats-bad-team guy: someone who douses box scores with production simply because his team has no one else who can produce. The fact that a supposed top-10 player hadn’t led his team to the playoffs even once backed up this theory.

But the numbers were still the numbers. When it was evident that the Timberwolves were going to trade Love rather than get nothing for him since he could opt out and become a free agent the following off-season, the vast majority of analysts said trading Kevin Love essentially straight-up for Golden State’s Klay Thompson (which were the particulars of a reported deal) was a mistake. Love was worth more.

Yet Golden State was the one who balked at the deal, and now in June of 2015, the exact reverse is true. The trade is still a mistake, but because Thompson is worth more.

So what happened in one season to shift the balance of Kevin Love’s NBA worth? For starters, he became an afterthought in the Cleveland offense. His numbers during the year were still pretty good, but not classic Love good. Rather than being the focal point of an offensive system as the deadliest pick-and-roll threat in the NBA and crashing the offensive boards, Love was relegated to spot-up duty in the corners; James Jones with a bigger paycheck. He is certainly not the reason people are buying regular season Cavs tickets these days.

Love never got acclimated throughout the entire regular season, and then went down with an injury in the first round of the playoffs. He has been out ever since, yet the Cavaliers still traversed the Eastern Conference on their way to the NBA Finals, all without Love’s services.

Because of this, a brand new storyline grew, still about Love’s inadequacies. Instead of being just a good-stats-bad-team guy, he was now an offense-only guy who wasn’t needed to win ballgames. Love could score and collect rebounds, but he was/is a terrible defender. The Cavaliers’ defensive numbers reflect the vast difference between how the team has performed on that end with Love as the starting power forward, versus with Tristan Thompson in the same spot.

So if Kevin Love is overrated, a defensive liability, overpaid and easily replaceable for a team in the Finals, why would the Cleveland Cavaliers even want him back for next year?

The answer is because the postseason Cavs are not a recipe for how to win long-term in this league. They have been grinding out victories with LeBron James, defensive fortitude, and little else. But when Love was on the floor during the regular season, even despite his newly depleted value as compared to his Minnesota days, Cleveland was the best offensive team in basketball. Without Love (and without Kyrie Irving for much of the time as well), it has instead been a slog for this team to score. Every possession is a LeBron post-up or isolation. Post-ups by James are useful plays in that he likely scores against single coverage and always finds the open man against doubles, but it is hard and grueling basketball. The Cavaliers’ inability to come up with good shots at the end of these Finals games are evidence enough of that.

With Love in tow, the Cavs offense once again becomes diabolical. And look out if the coaching staff and Love ever come to an agreement on how to properly use the stretch-four man. If he moves into pick-and-rolls, pick-and-pops, elbow isolations and other formations, rather than just sulking in the corners, Love would excel, and scoring baskets would look almost effortless for this team at times.

Developing chemistry on the court takes time. More than one season is necessary to perfectly acclimate Kevin Love into his proper role on the Cleveland Cavaliers. Giving up after just the one year is shortsighted.

The same goes for Love in this equation. Him leaving Cleveland for supposed greener pastures in Los Angeles, or who knows where else, would be foolish. Although he won’t ever be this team’s go-to guy, he can be a more offensively potent version of what Chris Bosh was for LeBron’s Miami teams. Love also needs to remarket himself and revamp his image after this year. All the previously mentioned drawbacks of Love’s game are believed even stronger now. Running away to a new home to hide behind empty double-doubles won’t solve that one bit.

This pending potential free agency is two-sided, and both sides need Love to return to Cleveland.