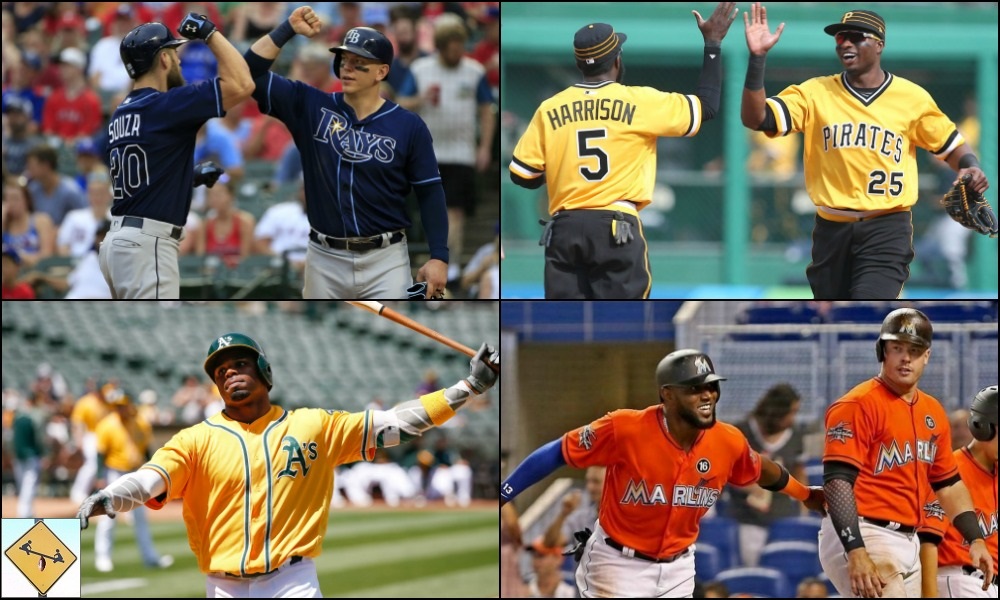 MLB Tanking is reaching new heights of insanity in 2018. One team executed it to perfection and now every bad team thinks they can tank to win. Don’t be fooled!

In baseball, as the old saying goes, every team wins 54 games, and every team loses 54 games. It’s what they do with the remaining 54 that really matters. Does that mean teams should be more or less inclined to punt entire seasons? What’s up with MLB Tanking?

Heading into the 2018 season, it appears as though the entire state of Florida is punting this year. Miami traded away what amounts to its entire offense. The self-proclaimed face of the franchise is now Dan Straily. So, yeah.

ALSO ON BUZZCHOMP: Where Does Walking Dead Go From Here?

In Tampa Bay, the Rays jettisoned a number of their best players as well, mostly for no return whatsoever. Logan Morrison became a free agent and remains unsigned, even though he led the team in offensive WAR last year. Corey Dickerson (fourth in OWAR) was designated for assignment. Jake Odorizzi was dealt straight-up for a non-elite prospect. Even Evan Longoria was shipped out of town.

We already know, beyond a shadow of a doubt, what these two Florida teams will be doing with their remaining 54 games. The Pittsburgh Pirates may be joining them, along with Oakland and perhaps everyone in the AL Central who isn’t Cleveland.

This trek through choppy waters seems to be, at least tangentially, connected to the dearth of free agent signings this offseason. Teams aren’t trying to pay money to jump from, say, 65 wins to 70 wins. They also realize that roster spots may be better spent on controllable young guys, rather than players past their primes.

But everyone is 54-54. This isn’t the NBA. Good base-running and defense, along with timely, lucky hitting and stranding of runners can make an average team good, at least for one season. Baseball seasons shouldn’t be punted because there isn’t enough of a difference between the top and the middle, or the middle and the bottom.

The issue of MLB Tanking is not black or white, and its hard to argue with the success Houston found employing at least part of this MLB tanking strategy. It’s smart to give your young players roster spots over veterans, if you believe yourself to be a bad team. Yet young teams need veterans to teach and create a winning environment in the locker room, no matter how things go on the field. It’s smart to lose a few extra games in order to get higher draft picks, but its impossible to know if you’ll succeed in your efforts to lose before the season begins. Ultimately I agree with you, it’s a bad idea to enter the baseball season with a goal of losing.

Every team is 54-54 in baseball. I don’t believe a team like the Marlins should have spent big money to retain Stanton, but there is no reason for them to bottom out their payroll. This makes zero baseball sense. Unfortunately, it makes perfect business sense. If you’re going to be a team in the bottom half of the league because you’re young or turning over, then does it really matter how bad you are? The answer is yes.

MORE BUZZCHOMP: Counterpart Reaction – The Other Side Revealed

If teams bottom out their payroll, then they can turn a profit because of the MLB money share. This is good business, but I believe it undermines the building of your team and winning down the road. The Houston Astros are the exception. They bottomed out their payroll, got high draft picks, drafted exceptionally well, added the perfect players in free agency, began to win, got really good, then signed a few key All-star veterans to solidify their roster for a World Series run. Everything went right for Houston, including their series against the Yankees which went a full seven games. For the majority of teams trying this “strategy,” something will go wrong along the way.

The idea of banking payroll is a smart long-term plan, as is the idea of letting young players get a crack at the major leagues earlier than expected. But all of this is predicated on the idea that you “know” you’ll be a bad baseball team. How can you possibly know this? Wildcard teams have been making playoff runs with consistency. Last season was the exception over the last five years, as we knew who the best teams were and they ended up being our playoff teams. The best two teams with the best two records were in the World Series. This is not a trend, but apparently most MLB teams are shortsighted in their long-term planning. MLB tanking is not a long-term option, but rather a mid-season decision once you’re out of it.