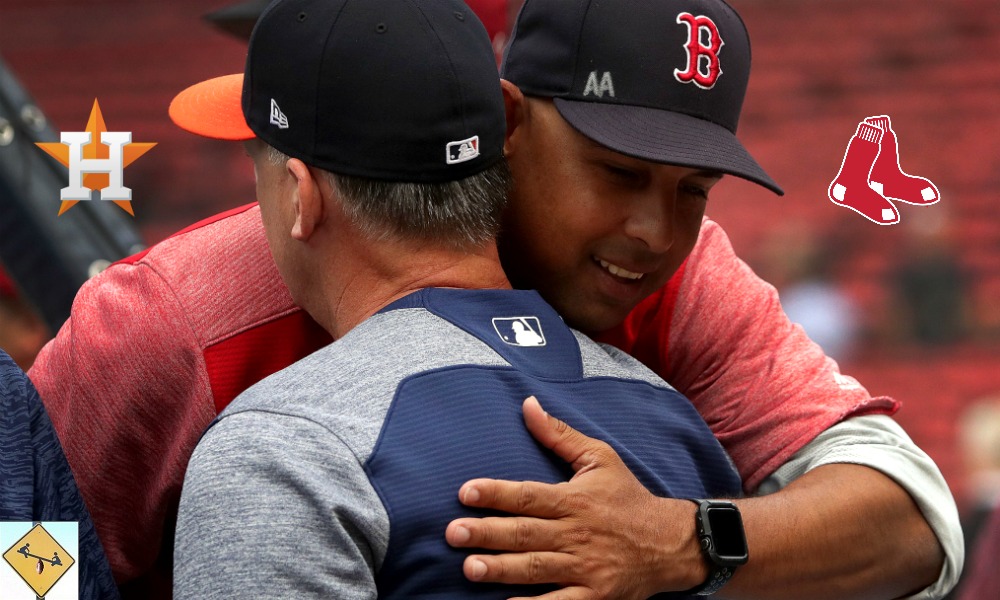 What more could we have asked for? The MLB punishments levied on Houston were directly in line with expectations and reality. Then the Astros did us one better. What can Boston expect? Round two looms large.

One round of Major League Baseball punishments have been handed down for using technology to steal signs during games. Commissioner Rob Manfred dropped the figurative hammer in his punishments to the Houston Astros.

Though the players were determined to have started the entire cheating scheme, no players were punished. That didn’t stop Manfred from banning manager AJ Hinch and general manager Jeff Luhnow one year each. The team was also stripped of first- and second-round draft picks in 2020 and 2021. Add a $5 million fine on top of that, and this was a healthy levy against Houston.

More BuzzChomp: What We Know of The Mandalorian Season 2 Right Now

But Astros owner Jim Crane took things one step further. He fired both Hinch and Luhnow after the punishment decision, meaning they will obviously not be back with Houston after the year ban is over. They will both get another job with another team because they are each one of the best in the league at what they do. Perhaps the year off will give them time to decide how to better control their staff in the future.

These MLB punishments were rightly harsh since the cheating occurred during the season in which Houston won the World Series. Perhaps, logically, that shouldn’t matter. The extensiveness of the cheating should be punished for itself, and the outcome shouldn’t matter. That feels true, but let’s be honest. We were all hoping for a message to be sent because of the old adage. Cheaters shouldn’t be allowed to prosper. Houston keeps its championship, but this was as realistically steep as a punishment could have been.

And now we wait for round two. The Boston Red Sox are being investigated for their own cheating scandal in their own World Series-winning season. Again, the fact that they won the title likely means MLB punishments will be harsh. Many assume that manager Alex Cora will face a similar year ban as Hinch received. Perhaps it will be even longer since Cora was a key coaching member of the Houston cheating as well.

Then it will be fascinating to see what the Boston ownership group does with Cora. Did Crane set a precedent here? It would look really bad for John Henry to keep Cora after Crane just fired arguably a better manager for arguably less. Then again, maybe Henry doesn’t care about how it will look…which is ironically the maxim Houston played by for a few years with some of its hires and actions all the way through the front office.

I await the Boston punishments, but the first round had me relatively pleased. I know Hinch and Luhnow will get other jobs immediately after they are eligible, but this was strict. Do you think the players should have been punished in any way? MLB couldn’t possibly have vacated the World Series title, right? That wasn’t a reasonable expectation.

Fan bases in other cities who were vanquished by both groups of these cheaters on their way to a tainted title may still feel bitter, but we weren’t going to all replay the games. This is as much as we could have hoped for. Now let’s see what happens in round two!

I expected a much steeper punishment than St. Louis received for stealing scouting information, and MLB did not disappoint. Houston deserved to be punished, because we all know their cheating was not limited to the 2017 season in which they won the championship. The league set a precedent for MLB punishments, so the Red Sox are now on notice. Fans of Boston should be peeing their proverbial pants right now, because the Astros aren’t the only team about to get punched in the face.

Punishing players was an unrealistic expectation, mainly because it was never a single player cheating for his entire team. That is pretty much impossible in baseball. Managers are team leaders. Many people don’t view them as coaches, but everyone agrees they galvanize a team and lead the locker room. That makes Hinch the only man responsible for his players’ actions and the only person who can be punished. Luhnow is in turn responsible for Hinch, so this feels right. Taking away draft picks in turn punishes the organization and its players, bringing the entire thing full circle. Only one thing truly surprised me about all of this.

I was surprised that Houston fired both Hinch and Luhnow so swiftly. No one would have faulted the Astros for keeping both men, as they are two of the best in baseball at what they do. Both men were integral in Houston’s championship and subsequent stay atop the American League. Removing them for one year is one thing, but permanently removing them from the team could permanently undo all the good they have built. I understand why Houston did it. Its good PR and good for the league to remove the bad seeds, so to speak. But is it good for the team itself?

I suppose Houston can hire a new manager and GM and move on, rather than sitting in limbo until next year. Boston likely does the same, assuming they too receive a similar, if not steeper, punishment. What’s steeper than year long bans and top draft picks being revoked? Two year bans and three years of picks? If we believe what Cora did in Boston was worse, since he was active in his team’s cheating both with Houston and the Red Sox, then the second hammer dropped by MLB will hit harder. This is likely true, but cheating is cheating. The Red Sox will get a similar punishment and that too feels right.

As an aside, its rather ironic that both the Patriots and Red Sox were caught cheating in the same year. Both won championships and then got caught cheating. The city of Boston is tainted forever. Their sports teams can not win without breaking the rules. More New York based Boston bashing, followed by some bias and a little sarcasm with a backhanded compliment for good measure. I await round two of MLB punishments with baited breath.