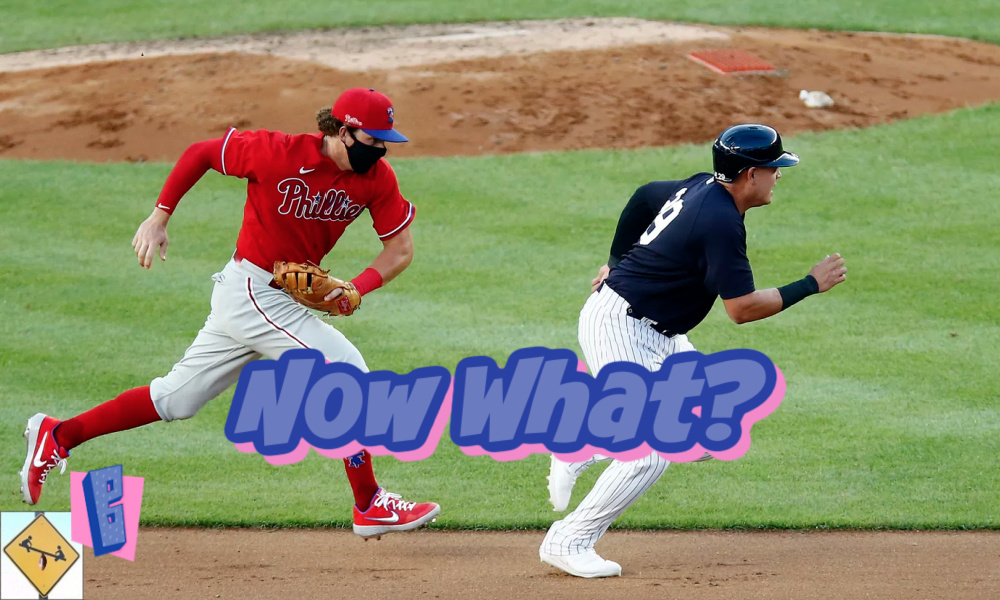 We can’t imagine a worse way to begin the MLB 2020 season, so what comes next? Miami is on hold and more games will be postponed. If making them up proves impossible, is a round robin playoff on the horizon?

The first week of the MLB 2020 season could not have gone worse for the league and for fans. It began with a questionable decision to expand the playoffs to 16 teams from the standard 10. Pessimists may think this was a change similar to that of adding a DH in the National League and adding advertisements all over the dang field. Its a change necessitated by the pandemic, but one that will stick around for the future, for better or worse. The pandemic was the excuse to make the change in the first place, but these things may not be gone in 2021.

The week continued with a barrage of positive coronavirus tests, postponements of games, shoddy execution on health/safety plans, and questions about how or should the league move forward. Nothing about this latter point is easy. Juan Soto, who was bumped from the first game of the season for a positive test, has reportedly tested negative at least six times since then. But since he has yet to get two negative tests in a row, he remains inactive. This is very tricky business for sure.

Dealing with and predicting this virus isn’t easy. It wasn’t expected to be easy. But the league and players may be botching a number of aspects of the protocol to keep everyone safe. And perhaps they were doomed from the start once the bubble idea that the NBA adopted fell through for baseball. Maybe this was never going to work regardless of vigilance.

But does it make sense to keep trying to play? Games continued to be canceled Tuesday, and more cancellations seem a certainty. If this happened within the first week, what can be done that makes us fans think a full 60 games can be reached? I don’t see it.

There was an interesting conversation to have about the expansion of the playoffs and the idea of keeping rule changes in future years, but the pandemic overshadows all. Unless an even larger expansion is the solution. What if MLB pulled a quick change on the season, aborting the regular-season plan and instituting some kind of championship tournament at a bubble site planned for later in the fall? Every team plays some kind of round robin until they lose three times. That third loss eliminates them from the tourney. Last team standing wins the MLB 2020 title, whatever we want to call it.

I don’t know how long this would take, which is obviously a large issue. You can’t schedule an indefinite amount of games for a set period of time. But baseball is more adaptable than other sports in terms of multiple contests in a day and playing multiple days in a row. There is something here.

You are certainly onto something here in regards to how the MLB 2020 season can actually be completed. Miami’s season is now on hold until Sunday at the earliest, meaning they have a week’s worth of games to somehow make up or simply skip over in a shortened year to begin with. Where is the room in the schedule to hold these make up games when the playoff field has been expanded? Are teams going to finish with grossly different numbers of games played? Talk about a wild tie-breaker scenario. Perhaps this expanded playoffs is a great idea, or perhaps this season was doomed from the outset.

I’m of the mindset that the MLB 2020 season is going to crown a champion one way or another. This appears to be the philosophy of all four major US sports. They will trudge through the mud, no matter how dirty things get. If Miami is simply removed from action because the team can’t get healthy, well then the league will adjust the schedule accordingly. Things get ugly when a second or third team befalls the same fate. It’s not a coincidence that our first big issue is with a team from Florida. But it’s also naive to think that with this happening within the first week of games, that it won’t happen at least one more time. It certainly will and the consequences only get worse as this bastardized season wears on.

In terms of alternative finishes, a triple elimination tournament would be damn exciting, if not unique and fun. This will likely get serious consideration if more teams are forced to miss a week here or there. Too many lost games screws up any kind of playoff seeding and makes the need for a more even tournament necessary. One thing that absolutely is here to stay are the rule changes.

Baseball has been attempting to make change for a long time, but the sport was resistant up until recent years. A universal DH is not going away. Sorry not sorry National League, but no one wants to watch your pitchers try to hit. Added advertisements aren’t going away either. They equate to more money for everyone, including the players in the long run. Unsold parts of a stadium can just be filled with digital ads on television. Seems like a no brainer to me and win-win for everyone. But gosh darn it, I truly hope they don’t keep an expanded playoff field.

Adding the wildcard play-in game was a solid move, adding tons of intrigue to the end of each season. But adding more teams to the playoffs will water down the accomplishment of making it in. It also dilutes the regular season which is very long, in case anyone forgot. The NBA and NHL regular seasons are kind of boring because the playoff fields are so large in both sports. It’s not hard to make it in and those final spots go to teams with zero chance of winning the title. I do not want that for Major League Baseball.