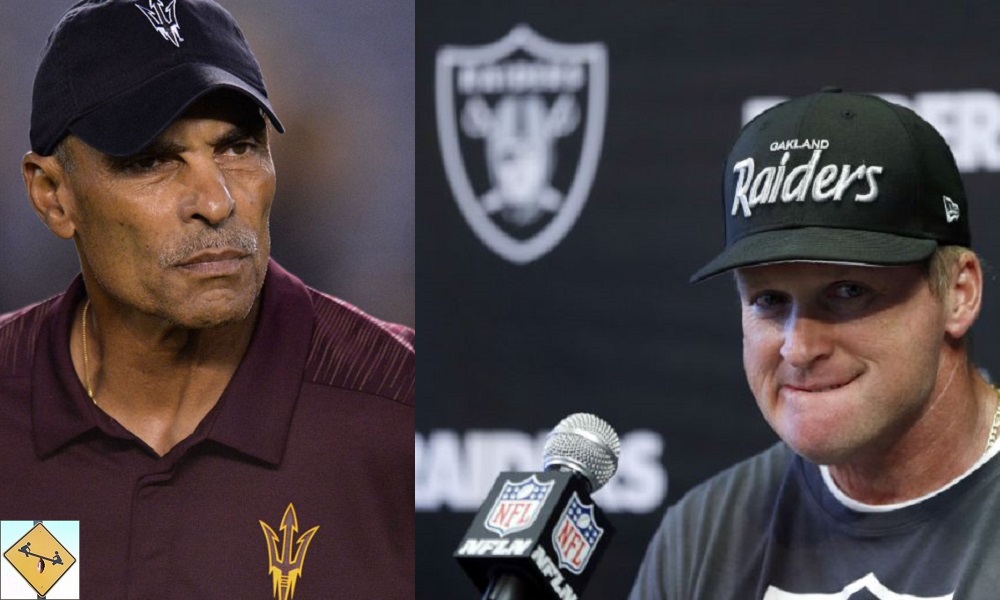 Two legendary football coaches enter the arena, but only one is the subject of each NFL quote. Both Jon Gruden and Herman Edwards returned to the sidelines in 2018, leading to a flood of quotable moments. They said what?

Jon Gruden and Herman Edwards are back! Both legendary coaches returned to the field in 2018 and someone needs to do a song about it. Good thing Pillow Talk TV made a song and music video to celebrate! But now that both coaches are back, tons of quotes are being thrown their way. This begs the question, They Said What?

This offseason, the football world was delivered two gifts in the form of character coaches. The NFL was given back Jon Gruden, a decade after his previous coaching stint. And college football was handed Herm Edwards, a decade after he last coached and the first time he would be coaching in the college ranks.

Both men were thought to be way past their primes and out of their elements reentering the sport after being away for so long. Would Gruden be able to adapt? Would Edwards know what he was doing? It’s too early to say for sure, but that hasn’t stopped people from spouting off on how these men would perform.

MORE BUZZCHOMP: 2018 Emmys Feel Like the End of an Era

I’m going to give you some quotes to peruse. The speakers don’t matter. You just tell me whether the subject was Jon Gruden or Herman Edwards. In cases where certain pieces of information would give away the answer, I may redact specific elements. Other than that, it’s pretty simple, right?

1) That was really gratifying to see because some of the folks wanted to doubt the intellectual capacity of [redacted]. I think he has quieted that noise quite well.

2) No one should be surprised by the intelligent football that they’re gonna get out of [redacted] going forward.

3) Any fella who’s smart enough to score [redacted] to perform a job he hasn’t done in a decade owns my unwavering respect.

4) The social media is more out there than it was when he first was a head coach. And so things we really would want to keep in the locker room get out there — players are more likely to talk about things and go on Twitter or whatever it is — and that might be a little bit of an adjustment for him.

5) In the beginning, he got in around 3 a.m. In the beginning of my first year there, I didn’t get in quite that early, but then he was like, ‘Hey, you need to get here when I’m here.’

6) By 3:30 that morning, [redacted] was done trying to rest. He rose and returned to his office…in an empty and dark room, evaluating the game tape and relishing the silence.

Wow, both of these rather legendary football coaches have developed their share of baggage over the years. Edwards was vocal, but mostly well-liked. Jon Gruden was also vocal, but not liked as a coach nearly as much. Both excelled in the post-NFL and post-coaching arenas. What would I say about them? Neither really “needed” to return to the sidelines, so why do it? I wish them luck, because Jon Gruden and Herm Edwards will certainly need it. Now for some of my own, as I place answers to your six “questions.”

1) This is about Herm Edwards, because it feels in reference to the University and not the Oakland Raiders. Perhaps this is a trick question, but Edwards always seemed more the intellectual to me. Case closed.

2) This is a jab at Jon Gruden, who always showed smarts with his quarterback evaluations post-coaching, yet never gave off that persona on the sidelines. Plus, he’s marketed as a dim-witted every man. Have you seen his latest commercials?

3) I’m going with Gruden for this one, only because Edwards does not have a high-profile college job. Perhaps that makes it harder to “score” him for the position, but that seems like a reach. The Raiders certainly hit the marketing jackpot by nabbing Gruden.

4) This is about Edwards and having to deal with his college players being fully engrossed in social media. While some NFL players carry a strong social presence, being on social media platforms is a way of life for college kids.

5) Three in the morning seems insane for a number of reasons, mostly having to do with getting enough sleep. Gruden seems crazy enough to push the limits this hard, so this quote is all about him.

6) This is Edwards, because he looks like he could have trouble sleeping. Plus, he can likely walk from him home to the office on campus. I’m not sure that option exists for Gruden.

This is impressive work by you. What started as a jokey contest with two men in oddly similar situations turned into a valuable unveiling of your deduction techniques. Number one was about Edwards. Two was Edwards as well though. Three was Gruden, referring to his hefty new contract. The contract details were what was redacted, but you still figured correctly on the pick. Like many of these, number four could have been either guy. It happened to be about Gruden. But you nailed the final two about each’s morning habits.