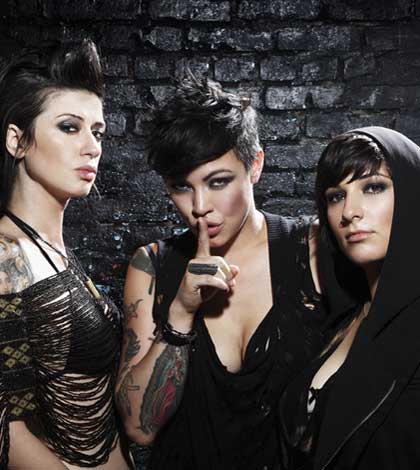 It’s no secret that the hard-rockin’ musicians of Hunter Valentine like to play rough. Devilish drummer Laura Petracca, gritty guitarist and vocalist Kiyomi McCloskey, and badass bassist Veronica Sanchez are owning the road, playing more than 70 gigs in three months. The trio are joined on tour by guest guitarist and keyboardist Aimee Bessada. It is yet to be seen whether the talented Bessada will join the band permanently.

Hunter Valentine wind up their epic tour this month with shows in Arizona, Texas and points east where they’ll provide welcome respite from dealing with the aftermath of Hurricane Sandy.  The final two shows of the current tour are November 17th in New York City and November 18th in North Reading, Massachusetts.

An iconic girl-band in the making, Hunter Valentine released their third studio album October 23, and have been wowing audiences across the country with their raw, female energy and banging new tunes from Collide & Conquer, along with favorites like “Revenge” and “The Stalker” from their previous CD, Lessons From the Late Night.

The new recordings deliver more range from McCloskey’s voice, which is somewhat reminiscent of a young Chrissie Hynde, of Pretenders fame. Add a touch of Joan Jett, and just a splash of Janis Joplin, and you hear something like the siren song of Kiyomi, whose name means “clear beauty” in Japanese.

McCloskey is clear in her writing, with lyrics as evolutionary as she is: authoritative, declarative, unapologetic, and with an indie wild streak a mile wide. These are not throwaway tunes, but anthems. Combined with Petracca’s compositions, the results are a fast-moving, fresh drive into rock ‘n’ roll the old-fashioned way: fast and furious, with the top down.

Read a longer version of this story, and Sunny Clark’s interview with Kiyomi McCloskey on Oregon Music News.