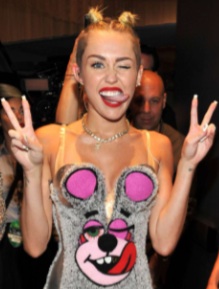 Miley Cyrus put away childish things when she shocked audiences by twerking her way forever out of Hannah Montana type, in a controversial performance at the MTV Video Music Awards (VMA). Cyrus shocked audiences in much the same manner that Elvis Presley once rocked the nation when he rolled out the hip-shaking moves that had catapulted him to fame on the old Ed Sullivan show in 1956. Considered so provocative at the time, his third appearance on Sullivan’s iconic variety show, in 1957, was censored from television audiences by shooting only his upper body. Viewers could only imagine how the future King of Rock ‘n’ Roll drove the studio audience wild by watching the screaming fans.

More than 50 years later, not so much has changed on the performance stage. Amid criticism and controversy, Miley Cyrus grew up right before our eyes at the VMAs this week, pushing out the box with her own gyrations, and is now being launched into an even greater fan orbit due to all the tongues still wagging over her controversial performance. Eclipsing live performances by Justin Timberlake, briefly reunited with his boy band, NSYNC, Katy Perry and even Lady Gaga, Cyrus stuck out her tongue and stole the show.

While friends and fans- including Mom, Tish -looked on, Cyrus got her twerk on during a risque dance routine that set her, tongue out, against a backdrop of sad-looking stuffed bears, while wearing a flesh-toned bikini-style outfit, and playing a very naughty foam finger along her nubile, young form. The high point- or, low point, depending on who you talk to -came while grinding on 36-year-old singer, Robin Thicke, whose new single “Give It 2 U” features both twerking and the now notorious foam finger. Twerking is the booty-shaking, bent-over dance move that emerged in the early 90s from the bounce music scene in New Orleans. Apparently, it’s not going away anytime soon, since the Oxford Dictionary Online has just recently added “twerk,” defined as “to dance to popular music in a sexually provocative manner involving thrusting hip movements and a low, squatting stance.”

Miley skipped her own MTV-awards after-party in favor of an impromptu recording session with Kanye West, reported Page Six of the New York Post (West, of course, is a controversial VMA figure, due to his infamous Swift attack during the 1989 Awards show. That seemingly ill-advised move did, however, increase music downloads for all players- Taylor Swift, Beyonce and himself -perhaps deeming West less deranged than he appeared that night and quite possibly more crazy like a fox.)

Unsurprisingly, Cyrus now has a new collaboration with Justin Beiber and Lil Twist called, “Twerk,” which was “leaked” on the heels of the VMAs. Three days after her public coming-of-age performance, Cyrus retweeted a message from her famous father, country crooner Billy Ray Cyrus, that was anything but the tongue-lashing some expected, since he sits on the Advisory Board of the Parents Television Council which aims to protect children from sex and violence on TV.  The same Council that issued a harsh statement demanding that MTV executives be fired and deeming Miley’s performance ‘sexually exploitative’ to children. Nonetheless, Daddy Cyrus offered Miley approval and encouragement, “If twerkin woulda been invented … And I had a foam finger … I woulda done the same thang you did.”

Public reaction recalls that other young southern singer, also gyrating like no one so boldly had before him. Elvis Presley and Miley Cyrus shared a common rebellion against type, and the courage to make their own mark on the music world, critics be damned. That’s entertainment.

This article by Sunny Clark first appeared on MeetOrbit.com