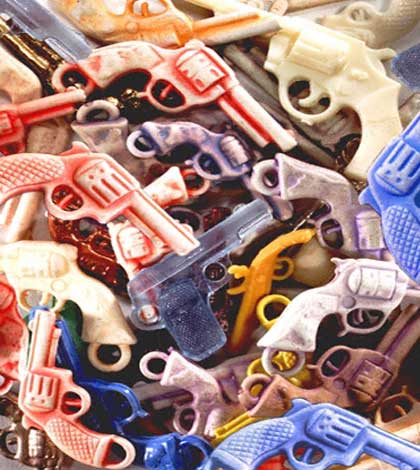 It’s a point of pride for Americans, part of the culture and a protected right. For the rest of the world it’s another chink in the armor at which to poke and disprove the greatness of the nation. In the light of recent horrors it’s time to swallow the bitter bile of debate and finally make changes that are long overdue.

The overhaul on gun control laws is unfortunately in the lime light once again. The tragic loss of life in Auora, Colorado and Newtown, Connecticut are only the tip of the iceberg for mass murder in 2012. The US has seen 16 mass shootings  in 2012 alone resulting 94 deaths (including the gunmen’s suicides) and injuring 105 others.

Yet, the truly disturbing fact is that mass murder in America has become common place. In the last 50 years America has moved far beyond the planet in the number of mass killings. Since 1982 alone there have been 62 mass killings in this country. The scary part is that the weapons were legally obtained by the shooters or the shooters had unrestricted access to legally obtained weapons. Here is where it gets ugly, here is where the red-blooded hackles start rise and bristle – regardless of how those guns were used, it’s our “right” to own as many guns as we want.

Granted, the Second Amendment is a law that allows US citizens to publicly arm themselves (based on State regulations) with any type of and amount of guns they desire. But the big question is… What for? If we look at the Second Amendment it specifically states that gun ownership is based on “A well regulated Militia, being necessary to the security of a free State, the right of the people to keep and bear Arms, shall not be infringed.” Now, read that again, in black and white with no NRA-backed Congressional body legalese. It’s for the purposes of a Militia, to protect the country, at the time from what is now one of America’s greatest allies, Britain. Times have changed; our laws must reflect that so that we can change too.

America has the most guns per capita in the world, next only to Serbia (which had an active militia during the war after the dissolution of Yugoslavia – again a trained militia). There is nothing wrong with law-abiding citizens owning guns for home protection, hunting, target or skeet shooting or collecting antique or are firearms. I’ve gone to a firing range a few times and it is fun! The problem lies in the lax attitudes of certain states when it comes to regulating the types of weapons that anyone can buy without a thorough criminal background check or proof of knowledge that the individual is trained in the safe and responsible use of such firearms, understands their full potential and respects their power. But as we have all seen, sometimes people slip through the gates.

A simple solution proposed by the NRA is to send armed guards into schools (who of course will not abuse their authority) and arm teachers. It’s a simple philosophy of deterrence with a simple course of logic. In general, buy a gun, shoot at paper targets a few times a week and anyone is ready to be put into the chaos of a mass shooting with people screaming, running and bullets flying any given way. Of course the average individual would be able to source out the gunman, take perfect aim and down them in one (maybe two) shots without hitting a panicked person running for their life. Guns are just that easy to use, especially in high-stress situations. A little reality check NRA: any cop or soldier will tell you that it takes specialized training to return fire without incurring collateral damage or simply freezing. Not the wisest solution. Consider too that any person disturbed enough to walk into a crowded public place and randomly plug away at unarmed citizens might be looking to go down in a blaze of glory. What better way than to shoot it out with an armed individual? It will save them from having to commit suicide afterall.

Gun laws have to be changed, now! The fact that the subject is only broached after a mass killing is simply appalling.

Every other industrialized, first-world nation has restrictive gun laws for a reason – so that not just “anybody” can own a weapon that could potentially ruin innocent lives. If Americans are unwilling to bend on gun ownership then the onus is on the State to prove that the individual is psychologically capable of owning (any kind) of firearm.

Mandatory gun ownership safety courses and psychological evaluations are required by most countries that allow some form of gun ownership. And no, this isn’t an attack on the mentally ill, the vast majority of whom are being treated and wouldn’t harm a fly. Yet when a State allows the ownership of high-powered, fully-automatic weapons which can hold a 100-bullet drum without anything more than a driver’s license, let’s just hope Jesus doesn’t tell certain owners to go cleanse Babylon and make way for his return. All the mass shootings in the last 30 years involve gunmen with psychological issues that were not recognized or treated properly; it’s time we make sure someone is right in the head before they exercise their right to bear arms. And if you live with someone being treated for severe psychological issues, the laws should require you to secure your firearms in such a way that only a licensed user can gain access to them. If that means off your property, then so be it. No one needs to be a victim to protect your rights.

But before archaic laws are updated or upheld by billionaire-backed lobbyists, America needs a cultural shift. Since childhood we are told of our rights that can never be taken away from us, and that is truly what makes this country and its citizens great, and ultimately foolish. Those who believe that gun laws should never be changed need to stop acting like a grade-four class being punished because one nasty student let of a stink bomb and no one is willing to point out who it is. We know why this is happening, and we know what to do about it. Many rights have been amended to reflect social change and promote societal evolution to something greater. It’s time the Second Amendment reflects that responsible and capable citizens can own firearms with adequate training. And yes, “freedom isn’t free” but when the cost is innocent lives snuffed out before they’ve even had a chance to begin, that’s a price no sane nation should pay