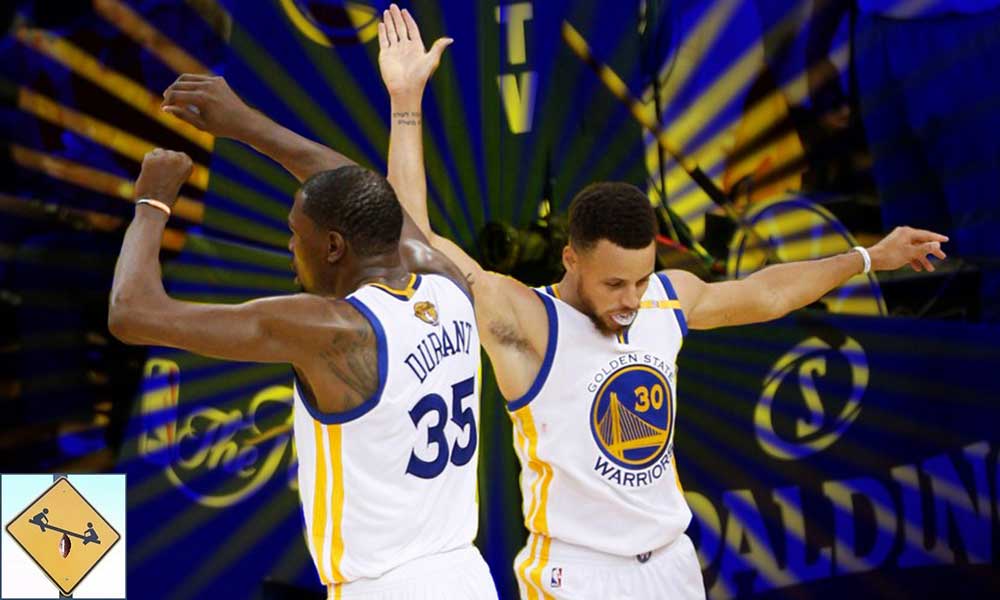 Would you pick the Golden State Warriors or The Field to win the 2018 NBA Finals? A ludicrous question is anything but this season. NBA sports debate.

The most important question about this NBA season is who would you pick to win the title, the Golden State Warriors or the field? That is the ultimate test of the Warriors’ dominance. I can’t confirm this, but I read somewhere that Golden State’s opening title odds are the lowest in the history of the league. Again, I don’t remember where this came from, and it might not be true, but it’s probably close regardless. No other individual team this year would be a smart championship bet. But what about every other team?

In any previous instance of taking the field versus one item, I always grab the former. There are just too many unknowns and unexpected occurrences to back a lone winner. Except this is the NBA and this four-year iteration of the Warriors is probably the best regular season team in the history of basketball. Yes, GS has lost during this run, but the 2017-18 version is also the best constructed this roster has been…which is saying quite something. At full strength, the Warriors are obviously the best team. But even if they lose one of their stars, they are still probably the best team. I am taking them against the field, and the only way I lose is if multiple impact players go down during the postseason. I don’t foresee any other circumstance knocking them off their path.

1) Steve Kerr’s back problems flare up again and he doesn’t coach for the rest of the season.
2) Draymond Green pulls a Ron Artest and punches some dude in the crowd, resulting in a season-long suspension.
3) Stephen Curry’s ankle issues from a few years back return. He plays but isn’t the MVP-level player we have come to expect.

ALSO ON BUZZCHOMP: Who Won The Week in Movie Trailers?

Those are three of the worst outcomes that could befall this club, losing a top Coach of the Year, Defensive Player of the Year, and MVP candidate respectively. And yet, they are still left with Kevin Durant and Klay Thompson, two of the half-dozen greatest shooters in the history of this league. They still have an elite defense, scoring off the bench, and would, without a doubt, be a top seed heading into the postseason. Would they win the title with this hypothetical club? Maybe not, but also maybe so. That’s how good they are. That’s why I’m not taking the field.

I’m taking The Field versus the Golden State Warriors as the winner of the 2018 NBA Finals simply because of LeBron James. This is not to say that I believe the Cavaliers will win, or that the Warriors are not prohibitive favorites. Simply put, it’s almost always a better bet to take the field. When LeBron James is part of that field and has defeated said team in the past, I’m backing James and the rest of the NBA.

Golden State is the likely winner of the championship this season, yet they were the likely winner two seasons ago as well. James and the Cavaliers defeated the Warriors that year, but Golden State came out on top in two of the last three NBA Finals. Boston was considered a real threat to Cleveland’s dominance in the Eastern Conference this season, but after losing one of their best players in the very first game, I’m dubious about their chances. The Celtics are not the only team dealing with major injury. Jeremy Lin was also lost for the year, all be it for a losing team.

The point being, injuries happen frequently and we can not predict their severity. Just look at the Green Bay Packers minus Aaron Rodgers. Both Curry and Kevin Durant have suffered significant injuries during their careers. The same can not be said of LeBron James. I’m also a firm believer in the San Antonio Spurs and their sleeper potential in the Western Conference. If not for Kawhi Leonard’s injury last season, they would have pushed Golden State to its limit. Would that harrowing series have set the Warriors back enough to allow Cleveland to steal another title? We will never know.

As a fan of the NBA, I hope The Field truly pushes the Golden State Warriors. I hope our other Western Conference power teams in San Antonio, Houston, and Oklahoma City live up to the hype. Boston and Cleveland need to be better as well, if that’s even possible considering their roster shakeups. But I refuse to crown the Warriors before the insanely long NBA season has been played. They might be favorites, but I’m picking The Field.