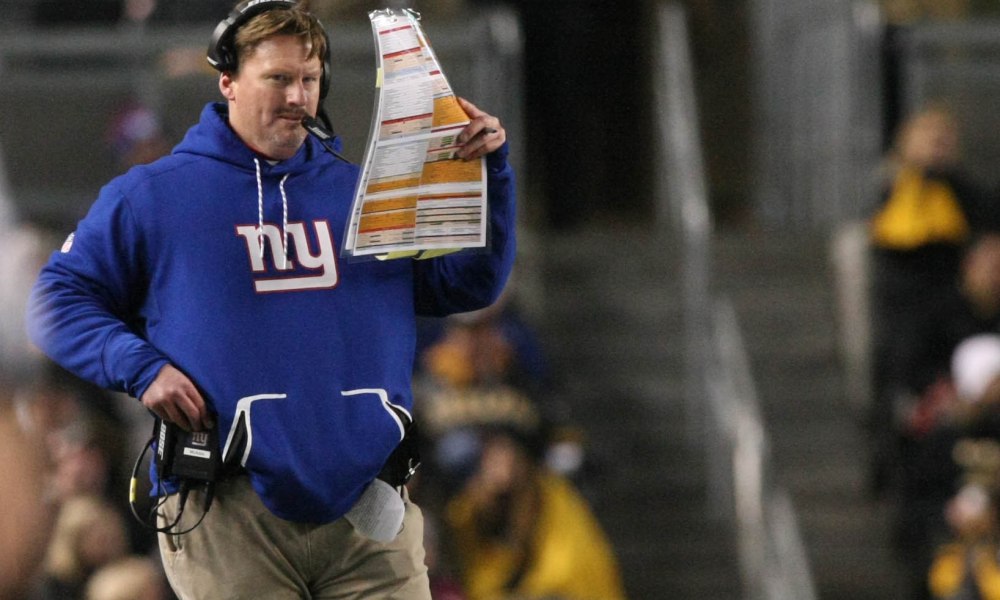 The New York Giants won their first game of the 2017 NFL season, but it felt like Ben McAdoo had other plans in mind when considering his swap of play-callers. He deserves no praise.

Don’t praise Ben McAdoo. He hasn’t earned congratulations or a pat on the back. The New York Giants grabbed their first win of the 2017 NFL season with an incredibly surprising performance Sunday night against the Denver Broncos. Just don’t credit their head coach for the victory.

McAdoo has been under fire all season for running an inept offense, despite that being his coaching forte. He stubbornly refused to give up play-calling duties and didn’t adjust the offensive line until injuries forced his hand. Now, after a Week 6 game in which both of those changes occurred, people want to give McAdoo an atta boy. On the contrary, these changes seem to have taken place with less-than-innocent motives.

Why would McAdoo finally give up play-calling duties now? Could it be that he finally saw the writing on the wall and determined his team was better off with Mike Sullivan in charge of plays? Maybe, but doubtful. After the contest against Denver, McAdoo said his entire team really needed him this week, not just the offense. Well, duh. Maybe we now know why McAdoo was such a shaky head coach to begin with. He didn’t realize he was in charge of the other phases of the game.

ALSO ON BUZZCHOMP: Running Tips; How to Adapt to Change

Maybe McAdoo really thought Sullivan was the best play caller, and it took him six weeks to realize that. Maybe McAdoo thought his entire 53-man roster would be better off if he could give it his attention. Or maybe this was a well-timed ploy to make McAdoo look as good as possible. The timing is just too convenient.

Why this week? Well, for one, so many other things overshadowed this decision that it never even came up midweek heading into the Broncos game. Between injuries and suspensions, I’m not sure any reporters even asked McAdoo whether this would be the week for him to relinquish play calling.

The other reason this wouldn’t be the week to ask about it is because only a really sleazy, underhanded snake would throw a brand new play caller into the situation New York was facing. Figuratively speaking of course.

The Giants were heading on the road against the best defense in the league. They were facing this foe without their top FOUR wide receivers and starting running back. The offense had such a tall hill to climb to even be adequate this week, only a jerk would throw a new coordinator into such a scenario. Yet that is exactly what McAdoo did. Giving Sullivan the offense sure looked like he was setting himself up to look good while setting Sullivan up for failure.

But this wasn’t only an opportunity for McAdoo to look like he belonged as play caller if his coordinator crashed and burned with the deck stacked against him. If Sullivan were to succeed, as unlikely as that appeared pregame, McAdoo would then get credit for making the proper switch and swallowing his ego as he truly led the team to its first victory of the year. This was a win-win for McAdoo in every sense.

ALSO ON BUZZCHOMP: Golden State Warriors vs The Field in 2017-18

Sullivan did succeed, relatively speaking. The Giants offense looked solid. It stuck with the running game, allowing weak pass blockers to run block to their hearts’ content, while not relying on practice squad receivers. New York also went often to tight end Evan Engram, one of the few spots teams can exploit against Denver. In the ever-present NFL corollary that teams always win when no one gives them a shot to win, the Giants did enough on the offensive end.

Now McAdoo looks like a selfless genius. Maybe he is. We don’t have enough information to know otherwise. It just feels quite the opposite from the outside. The situation looked like McAdoo had failed, at which point he put his coordinator in a position to fail even harder, thus making himself look good by comparison. None of that emotional baggage technically matters. A win is a win. But not every result is justified by the process to get there, and I’m still not feeling great about the Giants’ head coach.