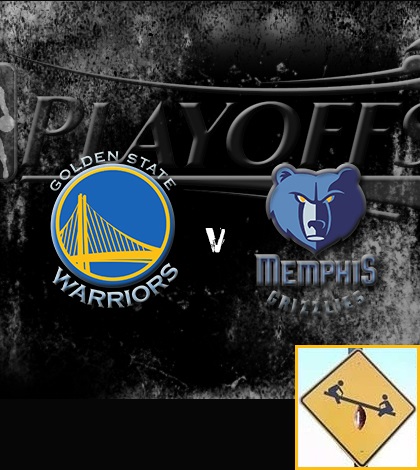 The Golden State Warriors are being pushed to the brink by the Western Conference’s biggest bullies, the Memphis Grizzlies. Can Stephen Curry take over this series, or will lack of experience come to haunt the league’s MVP? Its not the NBA Playoffs without the Grizzlies going seven games.

The Golden State Warriors are down two games to one in their best-of-seven series against the Memphis Grizzlies. This wouldn’t ordinarily be that big of a deal, except in this instance, it is.

The details are what makes this so intriguing.

Golden State is not just the one seed. It is a historically great one seed. The Warriors won 67 games during the regular season and finished 11 games ahead of everyone else in the conference. They also ended the year with a double-digit point differential, something that implies greatness.

But even that isn’t everything that makes this second-round deficit so interesting.

Even with those stats, NBA people were hesitant to mark GS as a sure fire finals team because it lacks playoff experience and relies on jump shots to score. And then the numbers folks crapped on that logic because of how good Golden State is in nearly every facet of the game.

Though maybe those old go-to excuses really do matter. I mean, it’s not just that the Warriors have lost two out of three to Memphis. They are down even though Memphis was without arguably its best player, Mike Conley, for the first game of this series. So in Conley-played games, the Warriors are down 0-2.

This series is far from over. Golden State is the better all-around team and has the series’ best player in league MVP Stephen Curry. BUT, maybe experience is playing a part; maybe GS can’t win if the jump shots dry up even a little; maybe those old-school curmudgeons were right…for once.

Old school curmudgeons are always right… at least a little. I think playoff experience can be overstated, but in the NBA it certainly goes a long way towards a championship. The reason is simple, and here’s where the old guys know what’s up. The entire NBA regular season must prepare you for the even longer, more difficult, playoff grind. The NBA playoffs are really long, without a single game thrown in that lacks intensity. Experience teaches you playoff stamina, how to dig deep, and when to go balls out.

It’s not like the Golden State Warriors have zero playoff experience, but they do lack tread on the tires for a deep post season run. Its one thing for your star player to win you a regular season game, but for him to feel the weight of expectation to take over and win you three playoff games in a row is a different animal. Stephen Curry is learning how to translate his game to the playoffs and how to overcome adversity. He is getting exactly what he needs.

Before I shut down the old man speak, let me say that the Memphis Grizzlies have been the toughest playoff out in the NBA over the last five years. I’ve watched them pound and squash superior LA Clippers teams. I’ve witnessed them take the San Antonio Spurs to the brink, and here they are once again man handling the BEST team in the league from this past season. It’s rare for the Grizzlies to go out in less than six games.

As for this series, heading into game four tonight, the Warriors are in excellent shape. They split at home and have now given up one on the road. They must salvage a road split before heading home. That being said, if Golden State goes home down 3-1 I still expect them to take care of business on their home court and head back to Memphis with a spark in their step. Game seven will be at Golden State and this series is going the full seven.

All great players go through playoff adversity. It’s what ultimately molds their greatness. Stephen Curry is getting his against the Grizzlies, much like every other Western Conference team has over the last five years. The real question is whether Memphis can get over their own hump. They keep battling, only to lose the war.

More Sports: Was May 2nd the Greatest Sports Day Ever?