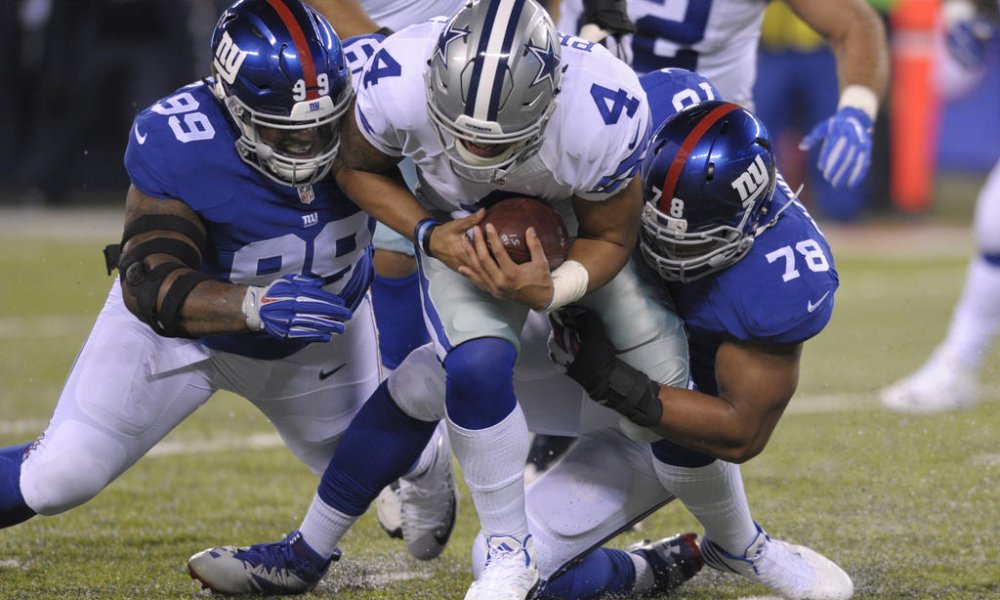 It seems as though a surprising front runner has emerged as far as who will start at defensive tackle for the New York Giants alongside Damon Harrison. That man is Robert Thomas. Boom.

We know Damon Harrison is going to be starting at one defensive tackle spot for the New York Giants. There has been lots of talk about who the other starter will be, and it seems as though a front runner has emerged. According to NJ.com, that man is Robert Thomas. He was the one getting first-team reps during the offseason program and may have a leg up on his peers, though it’s obviously early.

ALSO ON BUZZCHOMP: Oh, Hello on Broadway Hits Every Mark and Then Some

Thomas is a surprising pick for a number of reasons. New York has essentially four guys battling for that coveted starting spot alongside Harrison. Of the four, Thomas may be the unlikeliest to get it.

He went undrafted in 2014 and never saw the field. He barely played for the Dolphins the next season either. Between 2014 and 2016, Thomas was on six different teams. The Giants selected Dalvin Tomlinson in the second round of this year’s draft to presumably win this job at some point soon. He is the man with potential and pedigree.

Thomas doesn’t have much NFL experience.

He is 26 years old with little on-field action to his name. He played in one game with the Dolphins in ’15 and just eight games last year for New York, starting none. The Giants signed free agent veteran Corbin Bryant this offseason to presumably battle for a major role on the team. Bryant has played in 56 NFL games and is not yet 30 years old. He is the experienced man on the depth chart.

Thomas is not overly familiar with the Giants.

With just half a season of experience in this system, he is hardly the most familiar with the way New York does things on the defensive side. Jay Bromley is entering his fourth year with the club after being selected in the third round of the 2014 NFL Draft by New York. He saw game action a little bit as a rookie and has played in pretty much every game the past two seasons. Bromley is the man with experience in this system.

Those are three qualifications for possibly starting, and Thomas meets none of them. He is out-flanked in every area by a DT teammate. And yet, that hardly matters if he ends up outplaying the other trio of players. Receiving first-team reps during the offseason program is hardly a guarantee of starting snaps, though. We will see this position battle likely last long into the late summer and preseason. Just for now, Thomas is the surprising front runner.