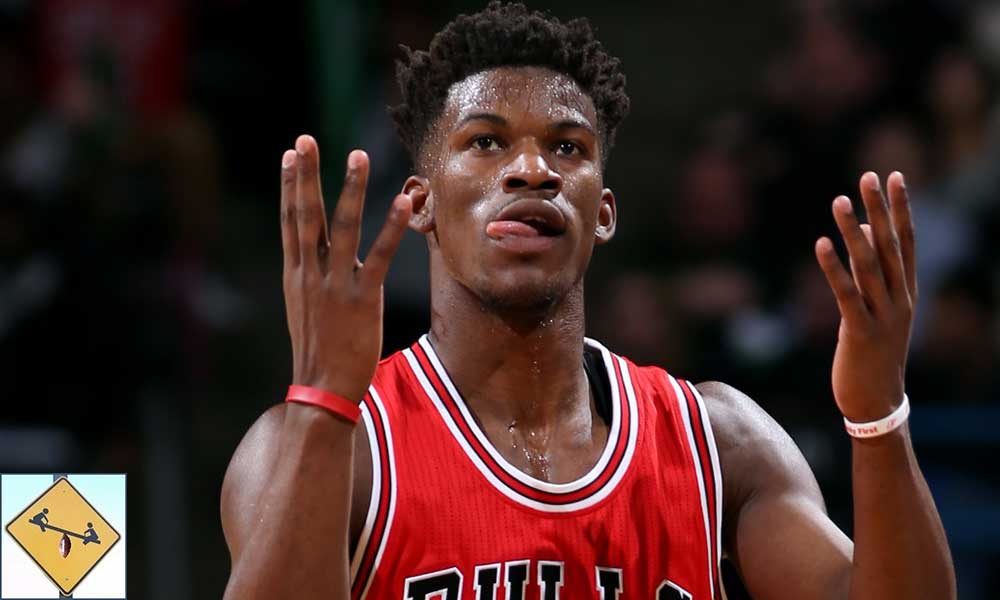 The Chicago Bulls shipped Jimmy Butler to Minnesota during the NBA Draft, but the deal favors literally no one. It had to happen, but both sides came up short.

Hardly one pick into the 2017 NBA Draft, the incoming rookie announcements were overshadowed by a trade of a veteran All-Star. After Markelle Fultz was taken number one by the Philadelphia 76ers but before Lonzo Ball was taken at number two, reports came out that Jimmy Butler had been dealt.

However, the new home for Jimmy Butler was somewhat surprising. Rumors had him linked to the Boston Celtics since last winter as the final piece to allow the Celts to challenge for an Eastern Conference title. Instead, the Bulls shipped him west, to his old coach in Minnesota.

The Timberwolves gave up last year’s top pick, Kris Dunn, as well as Zach LaVine and the seventh overall selection in this draft, which became Lauri Markkanen. In exchange, they received Butler and the Bulls’ first-round pick.

ALSO ON BUZZCHOMP: Time For New York Yankees To Panic?

What is your reaction to Butler going to what was a pretty terrible team last season? Everyone loves the Wolves’ potential, but this squad has been very bad, especially defensively. It certainly doesn’t lack star power, but will that actually translate to wins and a playoff berth? Maybe that’s a low bar since the eighth seed in the West last season only had 41 victories, but that would equal a 10-win improvement for Minnesota.

As a side note, I’m continually fascinated by the obnoxiousness of NBA Draft trades. A team selects a player for another team because no trades can be official until afterwards. We get it, but how is that less confusing than just swapping the rights? The league actually took a step forward this year at, of all places, the draft lottery. Instead of holding rights to old teams and indicating where picks would end up after particular machinations, the telecast just told us who owned the pick. Done and done. They should do the same with drafted players and get rid of this silliness.

Overall, the lottery picks specifically was pretty blah. People were quibbling about where guys would go, but there were no surprises early in the first round. The lone exception was the Butler deal, and perhaps the lack of deals and other maneuverings by franchises sitting on tons of assets.

I was not surprised that Jimmy Butler got traded, but I was pretty floored to find out where he was going. Chicago had to deal him for as much as possible, meaning now while his stock is high and he’s under contract. But I’m slightly confused as to why the Timberwolves would covet Butler. They are immediately better, but not great. Maybe that’s good enough.

It’s easy to admire how hard Minnesota has worked over the years to be a contender, but it’s never worked. The team has never gotten over the hump. Do they honestly believe Butler can push them over? The trade itself was good, however. They gave up the 7th pick for the 16th pick in the 2017 NBA Draft, along with one potentially great player that you noted and another. Chicago must like Dunn, because I’m torn on whether the 7th pick was any better than the 16th in this year’s draft. Only the top five stood out from a distance.

So if the Timberwolves got better and did not have to give up very much, where does this leave the Chicago Bulls? The team feels like a total rebuild project at this point. Chicago has never been able to recapture the dominance it had with Michael Jordan. Hell, it’s not even been able to make the playoffs consistently. Trading away your all-star will not help things. Bottoming out next season and getting a top three pick will. I’m flashing the sirens and putting the Bulls on ‘tanking’ alert. If you can’t beat em, bottom out. The new NBA slogan to live by.