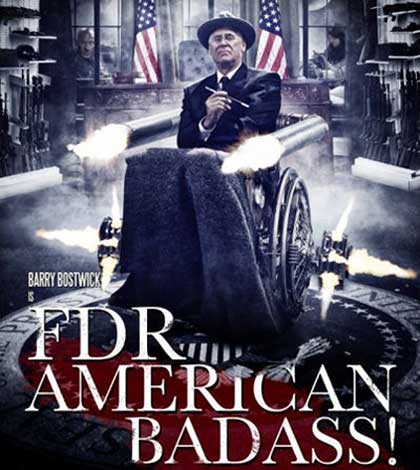 We’ve just finished a contentious election day. We’re trying to lose weight before Thanksgiving. Why not celebrate this time in between stresses by celebrating the President who won more election days than any other AND made Thanksgiving official? That would of course be Franklin Delano Roosevelt, whose hidden history as an unstoppable werewolf killer was revealed in FDR: American Badass.

What’s that? You don’t remember from history that Hitler, Mussolini and Hirohito were all part of a vast Axis Werewolf Conspiracy? Luckily, film producer and screenwriter Ross Patterson uncovered the truth. Or more to the point…

“Originally I was going to have him killing mobsters during prohibition,” Patterson told me over the phone, “but we couldn’t get financing for that. Then Abraham Lincoln, Vampire Hunter came out. Fox spent two and a half million dollars on that script! They told me, put vampires or werewolves in it and you can probably get it made. I’m almost making fun of Hollywood system itself. You want werewolves? I’m going to make them look like Michael J. Fox’s dad in Teen Wolf. They’re campy, they’re cheesy, some of them might even look like Ewoks. And sure enough we got financing.”

Well, they don’t look like Ewoks. And Patterson also uses Jar Jar Binks himself, Ahmed Best, in a small but effective cameo. The real key, however, is in the note perfect performance of Barry Bostwick as FDR. Playing it completely deadpan, he could easily recreate FDR for a more accurate biopic, though it wouldn’t be nearly as much fun.

In Patterson’s history, the patrician Roosevelt took a weekend hunting trip with the boys from the country club, but it was ruined by a random werewolf attack. Infected with polio from the bite of the werewolf, FDR realizes that somebody has to stand up — or sit down in a rocket-powered missile-carrying wheelchair — for the common man in this war against the werewolves. It turns out he was chosen, for the werewolves always sense when a great leader can rise against their plans for world domination.

Patterson also co-stars as Cleavon Buford, a genteel Georgian who serves as FDR’s Secretary of Parties. Rarely sober but always proud, Buford believes himself a member of an elite political party, because his registration card abbreviates Republican to Repub. His mispronunciation should give you a hint of how low the humor goes in this movie.

FDR: American Badass is clever, raunchy, over the top and achieves an amazing amount of fun for a low budget. That’s Patterson’s aim, as he’s already hard at work editing his next comedy. “At the end of the day, people just want to laugh,” he said before heading back to his editing bay.

Available now on DVD and VOD.