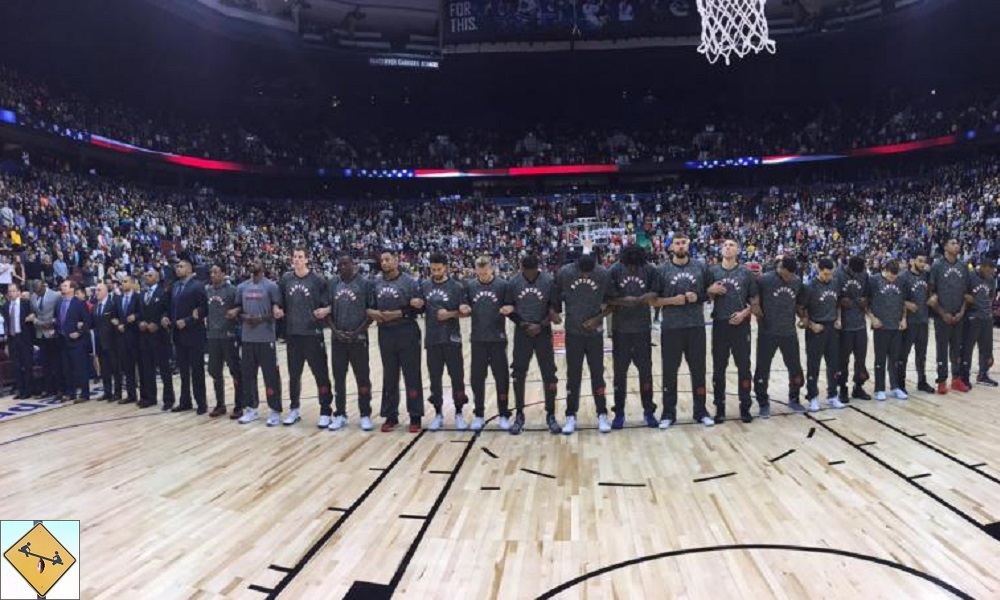 Donald Trump instituted a travel ban, immediately causing problems in the NBA. How far will he go and will the players be the first to fight? Don’t mess with our sports.

Donald Trump’s travel ban has reached its sticky claws into the world of sports this week. As everyone is probably aware at this point, Trump put through an executive order over the weekend to ban non-American citizens from seven Muslim countries from entering the United States. One of those countries is Sudan, which happens to be the home of Milwaukee Bucks forward Thon Maker.

After his Bucks played the Toronto Raptors in Canada, many NBA fans speculated and worried that Maker would not be allowed back into the US with his team. According to reports, he was allowed back in, but it was a startling reminder that sports are hardly above or outside of the rest of the world’s affairs.

ALSO ON BUZZCHOMP: NBA Players Bias is Worse Than Fans

It sounds as though Maker may have “lucked out” by having dual citizenship and an Australian passport. Los Angeles Lakers forward Luol Deng is also Sudanese, but he too possesses dual citizenship; he is also a British citizen. I wonder if neither player had this distinction, would they be barred from traveling home from Canada.

It is a crazy and scary time in America. Golden State head coach Steve Kerr came out against the immigration ban, saying it “could be breeding anger and terror. So I’m completely against what’s happening.” Kerr may have a little more insight than most into such a situation. His father was killed by terrorists in an attack in Beirut back in 1984, but even he says this is a “shocking” and “terrible” idea.

I assume that few members of the NBA community disagree with Kerr. It is hard to come up with a defense of Trump’s decision that isn’t blatantly racist. Do you see huge American corporations like the NBA making a difference with political issues such as this moving forward? Obviously Trump, at least at the moment, doesn’t care about public relations, but what if some of the biggest businesses in this country, professional sports, turn against him?

I suppose it would take more than Kerr saying something. We would need commissioners and owners to turn against certain actions for any impact to be felt. But we have seen in the past that sports have the ability to force change. They are so massive and important in this country. It was the case with something as recent as Missouri’s football program threatening to boycott its games if the school’s president didn’t resign. That happened just over a year ago. The professionals can take a page out of the amateur playbook, and we know the NBA is the most socially active of any of our sports leagues. Maybe it will get the ball rolling.

The motivations for Donald Trump’s travel ban are unclear, because I don’t believe the majority of our country is afraid of the people this is supposedly banning. We know that the US government is not afraid, so something else is at play. A federal judge may have already nixed the ban for the immediate future, but this appears to be a fight that will go on for some time. Thankfully Donald Trump is a big sports fan. It may make all the difference.

In all seriousness, sports bring people together no matter what side of a rivalry you’re on. By preventing NBA stars and other professional athletes from playing for our entertainment, the US government would be fighting a losing battle. Donald Trump only ever seems to win. Even when he “loses” he’s actually winning. He doesn’t want to screw with America’s sports. Furthermore, our athletes won’t stand for such blatant discrimination against their teammates and friends. Unless an outright revolt is the goal, this travel ban will be negotiated down to nothing.

Perhaps the ban is meant to distract us once again from a bigger, more sinister undertaking. Perhaps it was not only misguided, but also poorly thought out. There are two things that all Americans know to be self-evident. Don’t screw with our sports and don’t tread on me. This travel ban is doing both.


Once the Super Bowl wraps up we will see the true implications of Donald Trump’s actions. Protests are inevitable and change will be forced both ways if the government continues to tread all over us. But if they also screw with our sports, no one is safe because nothing is more sacred in America.