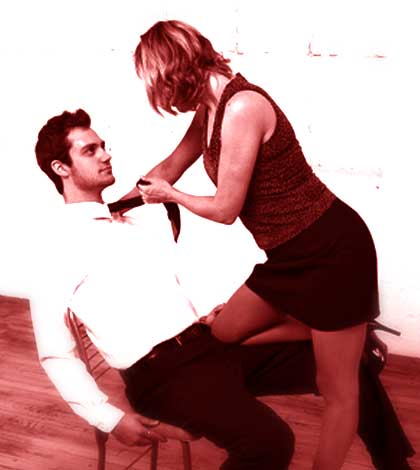 If you’re dating a younger guy, congratulations! Far too many centuries have limited women’s romantic choices. In adding younger men to the game board, every woman increases her opportunity for love and romance.

As a relationship expert in this specific field of research, I’ve witnessed a tremendous shift in societal perception over the last two decades. What was once thought of as unusual has now become commonplace. Our current state of social consciousness has finally allowed all women an expanded freedom of choice.

While the basis of all dating is still the connection between two people, this romantic design has some variations. To enjoy the best results, here are five things you need to know:

1. Be open to the possibility

Human beings possess an amazing internal computer system. All of our thoughts eventually become reality. Whatever we allow into our mind will occur in our life. If you want to date a younger man, first allow the ‘thought’ to exist. It’s like selecting a radio station. In order to date a younger man, create the mental frequency for his response.

Then you’ll carry that vibe. Like the radio analogy, once this mental frequency is set younger guys appear— when you’re walking your dog, in a grocery store, or out with friends. You don’t have to change how you dress. You don’t have to scout ‘college bars.’ Just live your life and watch what happens. Trust me on this one.

Younger men come from a different generation. They perceive the world differently than their older counterparts. They grew up with working moms, respecting and admiring powerful women. Whereas older men have been taught to see women as accessories to their lives, younger guys see women as equals. They accept female empowerment as the norm. That principle transfers into equal partnership.

Each successive generation is more enlightened and inclusive. Your younger guy may surprise you with an unexpected level of self-awareness. He possesses an emotional capacity you didn’t anticipate. Chances are he’ll be more spontaneous and adventurous than you’re used to. He may challenge your ideals. He’s apt to push you to a new understanding of a social situation, or open your thinking to a new perspective. This is rooted in his sense of equality. Younger men are exceedingly comfortable with your power and don’t need to diminish you, in order to substantiate themselves.

Because a younger man hasn’t had the time to learn the routine of dating, he may throw you off a bit… in a good way. Lacking the additional years of acquired gamesmanship, he’s often more natural and honest in his courtship. It’s refreshing. But it requires an equal dose of honesty from you. What attracts a younger man to older women is the lack of games. So, if your default is to pullout the known “this-always-works-trick,” forget it. You’ll be forced to be real. Honesty is the best communication policy here.

Don’t equate age with simplicity. He may have more content than you expect. What you thought would be a casual fling may turn into the ‘real thing.’ Less guarded emotionally and lacking the years of corresponding disillusionment, a younger man comes with a cleaner slate. It’s a blank canvas upon which the two of you may design the finest romance imaginable.

3. There will be exciting differences

A younger man will force you to grow. He will open the door to a new vision of life. He may not listen to the same type of music or use the same reference points in conversation that are familiar to you. He may have a completely different worldview— one freer and more open. You will be forced to see things differently and learn new things.

There will be enough commonality to connect you, but enough differences to excite you. The connection you share will be one of resonance, not formula.  Expansion and excitement are the hallmarks of involvement with a younger man. Be ready to do the “unexpected date,” go to the novel place and experience the unknown. Be ready to laugh. Be willing to let go of what you know, and enter the new.

4. You may not be the one in control

The term “Cougar” conjures up images of a stealth hunter on the prowl for her next easy prey. It sounds empowering.  Modern women love the comparison. But in reality, media has taunted us with a myth. The only thing a secure, established woman is in control of is her own life. Not another’s. You’ve won enough battles to know your strengths, and lost enough challenges to know you’ll survive. But don’t assume this younger man is a toy, or easy prey.

Younger men are the product of an evolving world. You may discover your younger man is more enlightened than anticipated. He may be able to handle things in the dating/relationship process that you are not. Let him be himself, and allow yourself to be the woman you’ve always wanted to be. Know what you want. State your truth. Don’t worry. You’re not giving up control. In reality, you’re taking authentic control. You’re entering a dynamic of co-creation.

Younger men view dating in terms of partnership. While former versions of dating assumed male and female roles, today’s younger guys prefer to create original models. Resist the temptation to mold him into the rigid dating versions of the past. Don’t allow the old roles to limit your vision.

By assisting each other and working together, you can create the version of dating/relationship that works best for both of you. Here is where you get to exercise real control. In evolving partnership models, two people function as one unit, with equal input and joint control. It’s a vast improvement on the old dating design. From my years of research, this type of partnership is where the real magic happens.

5. He’s probably had more sex than you have

While you might think you’re the one with all the experience, here’s where the tables often turn. Just because he’s young, doesn’t mean he’s sexually naïve. Age doesn’t equal sexual experience. Younger generations have grown up with a more open attitude toward sexuality. From the statistics I’ve studied, many young men have been active since their early teens. Their entire sexual landscape is uncluttered by the former mores of times past. Sexuality is viewed as a healthy, normal part of human expression. It’s a new terrain, where nothing is taboo and nothing is abnormal between consenting adults. You may just learn a thing or two from him.

We always hear that older men are better in bed. Personally, I can’t comment on this one. I think it’s just a rumor… started by old men. The oldest man I’ve ever dated was still 12 years younger than myself. While older men are said to have mastered the art of pleasing a woman— again, this is anecdotal. I’ve heard far too many complaints to believe it’s factual. Judging from what my girlfriends tell me, it’s definitively dicey. In this arena, older doesn’t always mean better. As for me, I’ll take my chances with younger men. I know what to expect.

In time, perhaps I’ll have the opportunity to experience a man in his 50′s or 60′s. At that point, I will have the answer… are older men better in bed? But at 80, I probably won’t feel like writing about it.