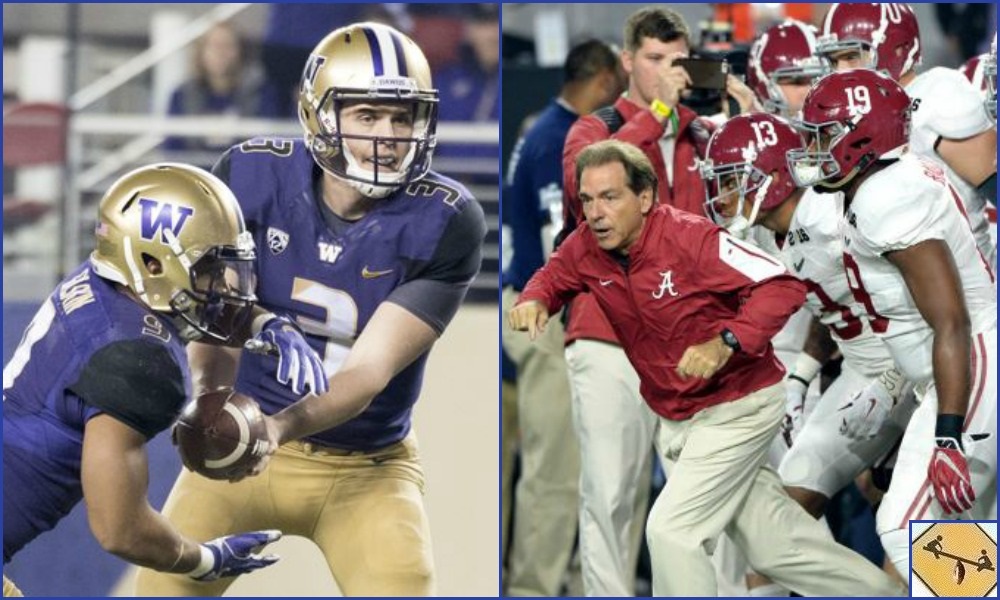 Some feel Alabama is overrated, while more realize the team’s greatness. Only Washington can topple the juggernaut, as both Clemson and Ohio State appear a step slow. College Football Playoff 2017 is best yet.

Finding the best of the non-playoff college bowl games is all well and good, but the main course of every NCAA football season is now the playoff. These other games mean nothing to anyone who isn’t a parent of someone participating in one. The College Football Playoff in 2016 (bleeding into 2017) will see semifinal matchups of Alabama versus Washington and Clemson versus Ohio State, with the winners facing each other for the national championship.

This was a great year for the playoff. First, it would have been a treacherous season for the old BCS. There was an obvious number-one team in the Crimson Tide, but selecting just one other team to face them for a national title would have been brutal. I think Clemson would have gotten that spot because of Ohio State’s lack of a conference title and Washington’s weak out-of-conference schedule, but I actually like the Tigers the least out of these four teams.

We also had a good year for this four-team playoff. An eight-team playoff would have been too many teams. Lots of fans are clambering for such a shift, but how many years are there eight good, deserving teams that should have a shot at a championship? It’s very rare. I could be talked into a very solid group of seven this season, but no one of quality for the eighth spot. To me, it’s more fun and intriguing to leave teams out of a four-team playoff than force teams into a group of eight. Maybe that’s just me.

That final point was a third reason why this was a great year for the playoff committee: it was a great debate this year. Was Ohio State deserving? Should we have had Penn State, since it defeated OSU and won the Big Ten? What about Oklahoma out of the Big 12? And where should Michigan slot in when it demolished Penn State and lost in questionable fashion to the Buckeyes? All these questions make the playoff more interesting.

And most importantly of all, we are still left with a great foursome…assuming Alabama doesn’t trounce everyone.

I love this Washington team. It has perhaps the most star power in the country between Jon Ross, Myles Gaskin, Budda Baker, and Pac-12 Player of the Year Jake Browning. I want the Huskies to defeat Alabama, though I don’t know if I really believe they will. Alabama has plenty of stars of its own, including the head man on the sidelines, who was reportedly so into his Tide last month that he didn’t know the presidential election took place.

The other semifinal is just as interesting, though I don’t like either squad as much as Bama and Washington. I think Clemson is going to advance because Ohio State’s offense doesn’t do enough to hang with an elite offensive opponent. Even though the Tigers seem like the weakest of the four playoff teams, they can hang a large amount of points on anybody, which the Buckeyes cannot keep up with.

I think the Alabama-Washington side of the semis wins the national championship, regardless of who advances from either game.

I absolutely love the four playoff teams this season and how we ultimately landed with these two matchups. It was a difficult decision, making for a great college football playoff 2017. As it should be. Fans lose if the playoff teams are a slam dunk. That being said, I agree that only Washington has the goods to topple Alabama this season.

Both Clemson and Ohio State have shown weaknesses that can be easily exploited by their opponent in this season’s championship game. I believe the Big 10 was simply very competitive, but not nationally dominant, and that Clemson is the better team. None of the Big 10 teams, including Ohio State, showed an ability to put away ranked opponents. The Tigers will give OSU fits in that regard. We both like Clemson to reach the final game and ultimately finish second.

As for Washington versus Alabama, I’m part of the camp that witnessed a weaker SEC this season. The conference was not nearly as strong as in years past. I also think the Pac-12 consistently gets underrated. Both USC and Colorado had excellent seasons. It will be interesting to see what type of football game ultimately transpires. Washington scored over 40 points in ten of its games this season, including two games of over 65 points. Alabama scored over 40 points seven times. The Tide gave up over 30 points in two games, while Washington never allowed a team to score that many on them.

I don’t think either team reaches the 40 point mark in this semi-final game, but if either team does it, it will be Washington. They have a real chance at controlling the game by forcing Alabama to play catch-up. The Washington defense is strong enough to hold back such an onslaught.


If I’m being completely honest, I can’t tell if I’m talking myself into a Washington victory or not. Both teams looked great all season. Both teams looked better than OSU and Clemson. Nothing would surprise me in this football game. A Washington victory wouldn’t surprise me and an Alabama domination wouldn’t either. A close game won by the Tide seems least likely of all.