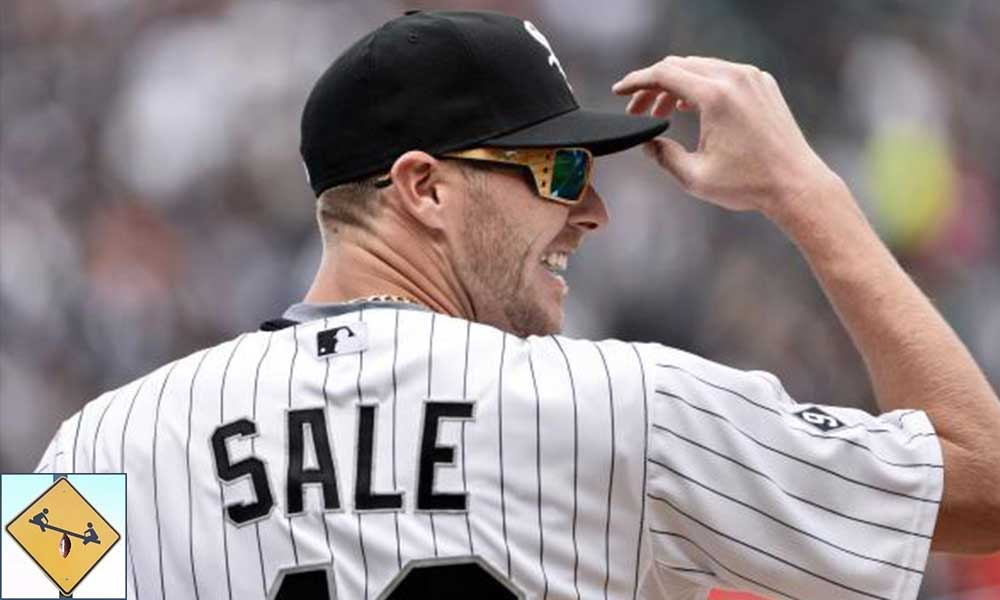 Chris Sale’s outrageous outburst left us wondering, what if he were involved in other major sports travesties? Steve Bartman anyone? What ha… happened?

Over the weekend, Chris Sale of the Chicago White Sox gave us a real life Wha ha happened? scenario that probably cannot be topped. He was scheduled to pitch on Saturday for Chicago but refused to wear the throwback uniforms that were the wardrobe for the day. He apparently feels they are uncomfortable and wouldn’t be pitching at his best wearing them. Makes sense.

Instead of any of the rest of this story making sense, the team apparently refused to change its marketing promotion and Sale took a knife and cut to pieces all the uniforms for his team. He was scratched from his start and subsequently suspended five games for insubordination.

Is there a better clubhouse story than this? Is it possible to get footage? As Michael Baumannsaid over the weekend, how did he cut up the entire team’s uniforms? Surely after two or three he stopped fuming but had to go through with the rest of them anyway.

So now I got to wondering how other incidents would have played out if Chris Sale had been involved.

1 – What if Sale had been the one to receive the clown question?

2 – What if he had been the left fielder for the Steve Bartman play?

4 – What if Sale had been left in to give up nine goals? …Well, maybe Patrick Roy took that one as over-the-top as it could get.

Chris Sale proved two things with his outburst and knife wielding antics. He showed the entire league that he desperately wants to win and look good doing it. He also showed that the White Sox are a mess right now. You asked how Sale could possibly cut up every jersey on his own. I’m not sure he did.

To cut up every jersey means Sale ripped apart at least fifteen full uniforms. I think he had help. Not a single teammate tried to stop him and I’m guessing a few participated in the charade. Sale is likely leaving via trade and the White Sox have fallen apart. This has team activity written all over it. More importantly, how would Sale have handled some of the most famous sports travesties?

1 – The clown question aka what’s your favorite beer, even though technically its illegal for you to drink in this county, but not in Canada.

Sale is of legal drinking age, but if had received this question while younger than 21 years of age I guarantee he’d have gone old school on the reporter. Sale feels like a down to earth kind of guy. Tearing up t-shirts and home brewing his own mead. Did you know that mead is making a huge comeback, at least among hipsters? Sale would drop his knowledge of the home brewing process and put that reporter in his place. Sure he can drink in Canada, but here in America he doesn’t break the law, he cooks it up in his basement.

2 – The Steve Bartman game where Cubs lost due to fan interference.

Sale would not have stood around and took Mr. Bartman’s fan interference lightly. He’d have grabbed that scrawny kid by his collar and dragged him into the field of play, literally catching Bartman and the baseball all at once for the final out. It remains unclear if the umpires would have accepted this unorthodox manner of catching the ball, but Sale’s point is clear. Don’t you dare get in the way of my ability to play baseball at the highest level. You want that ball? Well you can have it, but I’m having it to, along with your scrawny body. Bones be damned! I’m getting the final out!

This would have never happened under Chris Sale’s watch. If he was unable to effect the game in a way which ended things in his team’s favor, then this is what would have happened next. Sale would have grabbed every bat from both team’s dugouts and started hitting baseballs from the pitcher’s mound into the outfield. Some would clear the fence, others would have fouled backwards for sure. But there Sale stands, atop the mound, tossing ball after ball into the air and whacking away with every available bat. Someone has to win the game, gosh darn it. If no one wins then I’m winning it myself!

Sale prides himself on performing at the highest possible level, hence the uniform incident, so if he was to give up the equivalent of nine goals in a little over a period of hockey, then oh my goodness, watch out. This would be like Sale allowing nine runs in a single inning, or something like fifteen plus runs in less than three innings work. I don’t see the pitcher taking kindly to the insult. He’s been known to smash a bat or two, but if this ever happened I’d hate to be the rival team’s mascot. Sale would go demolish the mascot WWE style, laying the smack down one way or another. Its only fair.

What will Chris Sale do next? I can’t wait to find out!

More Sports: Do Yankees Fans Want this Team to Win?