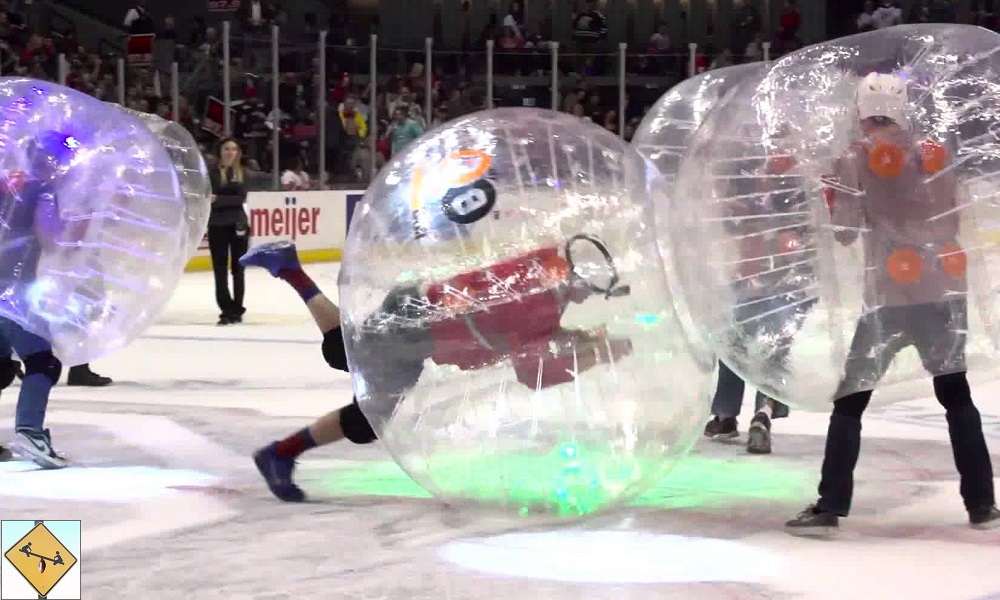 Bubble Soccer is inherently a wild and crazy sport, so how do you make it better? Play it on ice of course. What happened here? Dare to play?

Here at BuzzChomp we pride ourselves on having on opinion on every sport possible, including those deemed too dangerous for humans. Today we explore the phenomena of Bubble Soccer, now even crazier on ice. What possessed someone to make this game more dangerous? Are ther other ways can we play this sport? What ha… happened?

We present you the following Sports GIF:

Todd Salem: So many questions come to mind. Hopefully you can explain what is going on. First, obviously, this is bubble soccer, transferred to ice. Was the move made because bubble soccer isn’t dangerous enough? Do people have too much balance and body control in bubble soccer that some folks thought it would be smart to move the game to a more slippery surface?

Are these children playing bubble hockey? Adults? What is the scenario where such an activity would be gathered? It appears to be on the Detroit Red Wings’ rink, but what adult in their right mind would participate in this during an intermission of an NHL game?

If you decide to play bubble hockey during the second intermission of a Detroit game and you shatter both of your ankles (as I assume 40 percent of participants do), do you still watch the third period or just call it a day?

Where else can the bubble soccer idea be moved to make the sport more dangerous and less fan-friendly? In water seems like the most logical next step. What about with players riding on skateboards or skiing?

Dan Salem: Bubble soccer I get. It’s a weird combination of running into people and kicking a ball, yet it seems ridiculously fun! You get to bounce around and knock your friends on their butts, with the added wrinkle of being able to run and stand soundly on your two feet. Putting bubble soccer on ice is simply crazy. Sound the alarms. People are getting hurt!

Our sports GIF is exhibit A, insane adults playing the most dangerous game. I’m not referring to the hunt of human beings, but rather the futile endeavor of running on ice. We’ve all tried it and we’ve all slipped and fell. The ONLY reason to put bubble soccer on ice is to prevent either team from actually winning. I assume the Red Wings gave the winning side a prize, but with everyone getting hurt and no one scoring, the team did not have to reward anything to anyone. Score!

Playing on ice is the most dangerous and counterproductive way to experience bubble soccer. However, there are two ways in which the sport can be made more fun. Playing in water is the perfect evolution. Now all participants are basically floating, but make the pool shallow enough and you can run and jump and glide and bump and splash. I love this!


Finally, I would like to propose playing bubble soccer in the snow. I think regular skis are too cumbersome for this activity, but super short skis are perfect! This allows an effortless glide around the snow, cushioning on the ground itself when you fall over, plus the bubble for attacking your opponents. I’d watch the Olympics faithfully if they added crazy crossover sports like this.