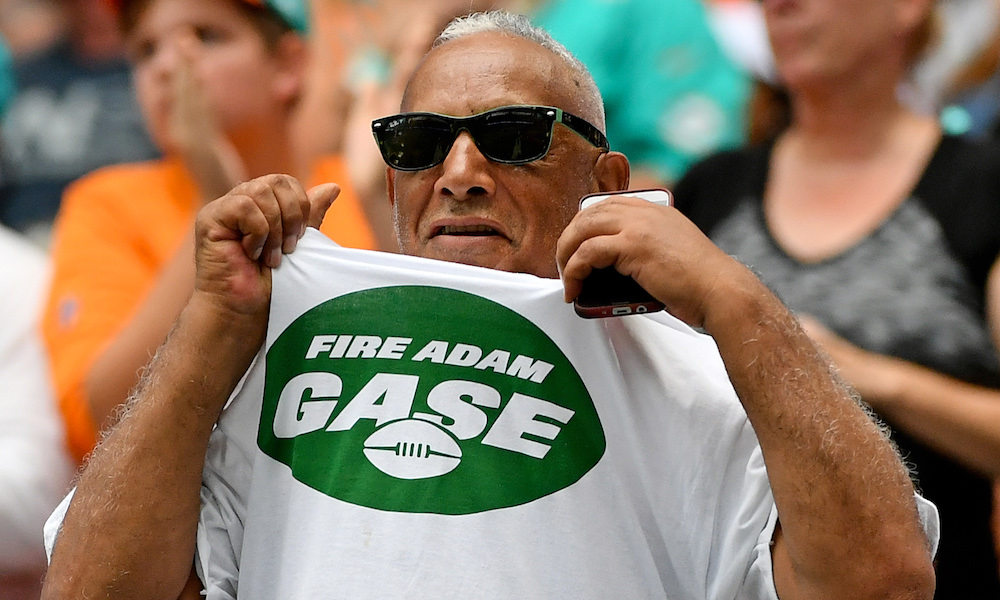 Like that infamous scene in ‘The Shining,’ there’s writing scrolled all over the walls of the New York Jets’ locker room. Adam Gase has left his team no choice but to fire him.

I sat down Sunday night after another long day of work, after another uninspiring performance by the New York Jets, and I could hear the helicopters in my mind. These are the same helicopters that just a few years ago flew banners that said “Fire Idzik.” This time they’re saying “Fire Adam Gase” and once again they’re right. He’s left the Jets no choice.

In what can only be described in my household as “loser f*cking football,” the New York Jets, led by an inept pairing of Adam Gase and Gregg Williams, seemed to top themselves yet again. What we have seen the last two weeks is so bad that I couldn’t watch a single snap. Mind you, I’ve been a die-hard fan my whole life who bleeds green and white. I choked down the “highlights” to reinforce what I already knew. This is an absolute joke.

The New York Jets have been outscored the last two games by a score of 67-20 and let’s not fool ourselves, it hasn’t even been that close. What we are witnessing is a coaching staff completely unprepared each week and a team that is simply quitting due to lack of preparation. The offensive “play calling” is appalling and the defensive schemes are just as bad. This team lacks depth at every skill position, which exemplifies the bigger problems. Our quarterback is left running for his life and once again making rookie mistakes. “Tank for Trevor” Lawrence here we come.

I’m not yet sold on another rookie quarterback. Let’s look at the big picture and the real issue. When Gase was in Miami, we were having the same conversation about Ryan Tannehill. This is the same Tannehill who now has his Tennessee Titans in first place with a 3-0 record. The same Ryan Tannehill who was a quarter of football away from the Super Bowl last year. Three years ago everyone was ready to write him off as a failure and a bust, but he’s far from it. The truth is now obvious. Coaching is everything and Adam Gase can no longer coach. He is a buffoon.

Three years have passed, yet we are having the same conversations. Now they are about Sam Darnold who let’s be honest, didn’t play well on Sunday. But how much is he truly being coached? How much is he being hindered by a lack of play makers around him and zero offensive flexibility? Can any quarterback be successful with no running game? Darnold is throwing the ball to players like Chris Hogan and Braxton Berrios without a number one receiver to steal coverage. Is it any wonder he’s pressing and making mistakes? These are not hard questions to answer.

My beloved New York Jets now have the privilege of playing on a short week, Thursday night against the also winless Denver Broncos. Something has to give. Both teams come into the game with a ton of injuries, but these Jets don’t make any adjustments and will lose this game. With any luck, Adam Gase will be gone on Friday and we can start anew. How many gosh darn times will I write that sentence? Insert name of coach here.