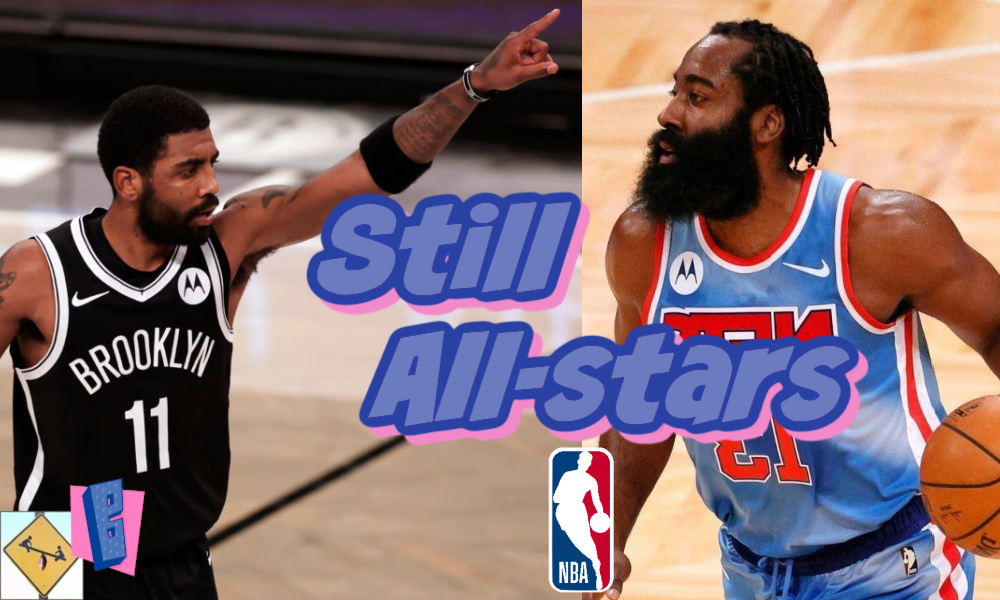 Voting for the NBA All-star 2021 starters falls into three categories of crazy. Do you ignore everything but performance, require players to be saint-like, or say screw it? The answer may surprise you.

People love to criticize the voting for the NBA All-Star game, or really award voting in general. Fans and players say the media is terrible at voting and doesn’t do a good job of representing how the league really is. The media says fans are too biased to vote. Everyone agrees that the players are the worst of all, some openly admitting that they only vote for teammates, fellow countrymen, or have other nonsensical rationales. This makes the results of NBA All-star 2021 voting a mess of crazy.

These three groups “come together” to make the starting lineups for the all-star game (until captains vote and mix up the teams anyway). This is an interesting year for voting for all-star for any number of reasons. We’re focused on something in particular though: the idea that how a player acts should or shouldn’t matter in honors like these.

More BuzzChomp: March Madness will be the wildest ever, feast or famine

We get into this issue every year with voting for the baseball Hall of Fame because the HoF specifically cites character as something that factors into the decision. There is no such clause for NBA award voting, but the idea is inherently within the voting. It permeates every decision and causes a ton of what can only be considered malpractice.

We are inherently trying to determine the best players. The best players are those available to their teams, at optimum playing condition, who aid teammates, etc. What happens when the best player does something that completely hurts his team, or makes himself unavailable? This year we have two rather specific examples in James Harden and Kyrie Irving.

Kyrie Irving is an all-star starter. He was voted as the second-best backcourt player in the conference by both the fans and players. He was placed fourth by the media. (There are two starting spots.) Irving straight-up ghosted his team for a long stretch of the beginning of the season. He is free to take time for his mental health, by all means, but this wasn’t the right way to go about it. He isn’t free to act in such a selfish way as to harm his own team and teammate relationships.

James Harden didn’t quite make the starting lineup in the East. He was named as the third-best backcourt player by all three voting contingents. Harden quit on his old team, demanded a trade, and forced his way out of town.

Should these situations matter when determining which players are all-stars? Maybe the answer is no. When on the court (on the court in the Eastern Conference in Harden’s case), both players have been masterful; easily all-star-worthy. But that doesn’t give the full scope of their impact thus far this season. The off-court antics also impact their team, which should impact their weight when it comes to honors.

Maybe the media had it right by putting Harden ahead of Irving. This is an Eastern Conference award, so Harden’s actions in the West don’t matter…? That gets into some hairy territory though.

Or maybe it all matters, and these guys have been so good that they are still worthy of starting in the all-star game even after the harm they caused off the court. Yet I find it hard to believe that the fans and especially the players are doing that kind of arithmetic when it comes to voting.

This is a tremendous topic that is more layered and interesting in the NBA, as opposed to other sports. Our NBA All-stars for 2021 must be the best players first and foremost. The ones who carry their team and take wins off the board with their absence. Yet it is impossible to ignore character and a player’s actions. Most of us are able to consider this secondary and at least in Harden’s case, his business decision remains exactly that for most players and many fans. What he did wasn’t personal, so it’s easy to forgive and forget. I’m not sure we can let Irving off that easy.

Perception means more than reality, which plays heavily into all-star voting and our opinions of each player chosen. We all know Irving to be a curmudgeon. He’s not exactly a people person and has no desire to make new friends. Irving is about basketball and was taught early on that this is a business. Treat it like one or get hurt. Now he is doing just that, acting in character, and treating people poorly in the process. I disagree with his actions, but because they are not surprising from him, its hard to hold them against him in terms of all-star voting. Irving is great. We can’t leave him out, even if he is a jerk and seemingly me-first in terms of media perception.

Character flaws and anti-team actions usually run their course. We see this with “Diva” wide receivers in the NFL. Their individual brands get bigger than their team’s brand, which shifts priorities. Or players must look out for themselves, meaning demanding more money in the face of no one caring if they get paid, so long as they play. The NBA puts players’ brands front and center, using it as the cornerstone of marketing and team buzz. These players are empowered from the start and their teams need them for both on-court and off-court reasons.

Considering this unique dynamic in the NBA, our NBA All-star 2021 voting results are kind of perfect. If Harden and Irving had not acted in the manner in which they did, Harden would likely be starting for the Western Conference and Irving would have been voted higher by the media in the East. It appears the media is acting as our defacto “voice of reason.” This is irony at its finest. Irving is great, but it would have been nice to see him get snubbed the start for his prior actions. No such luck. Harden forced a trade, which was a long time coming. This was not really held against him either. His body of work in the East is smaller, so he isn’t starting.

In a world where society loves to cancel out people for bad actions, past or present, we give sports stars a pass while they play. We forget while its convenient and remember later when it no longer affects our teams.