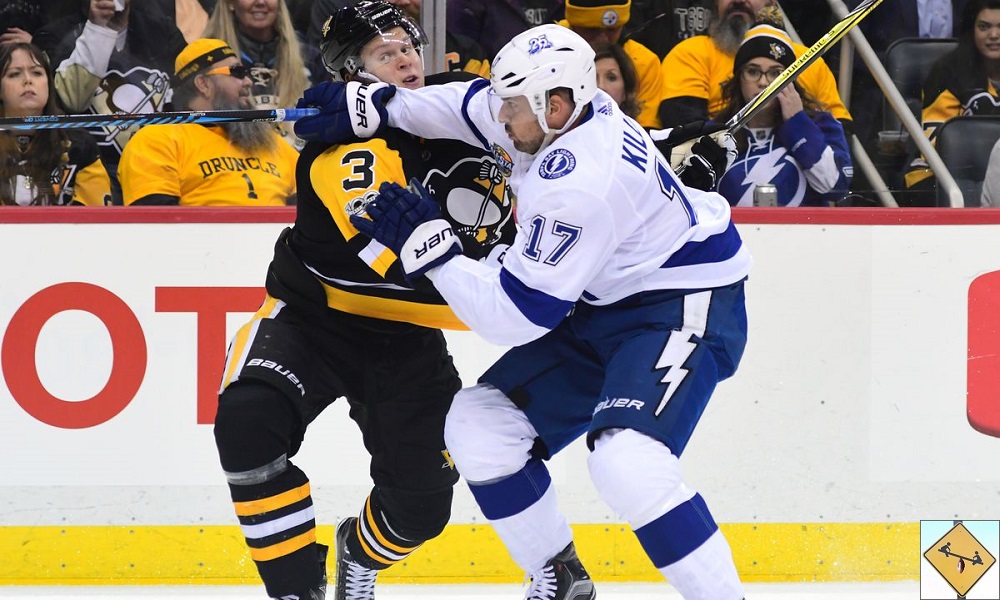 Hand them the crown, because the 2019 NHL Playoffs have proven two things absolute. The wacky NHL regular season is great and the league is king of parity.

The 2019 NHL playoffs kick into gear on Wednesday. We are ready for the annual tradition of multi-sport analysts (such as ourselves) to suddenly jump into hockey and exclaim how great the Stanley Cup Playoffs are. We have certainly been guilty of this in the past. But I’m here today to sing a different tune. Forget the playoffs; no one respects how wacky, wild, and exciting the plain, old NHL regular season routinely is!

It isn’t outlandish to see a full, complete changing of the guard each and every season in this league. Good teams drop out; bad teams suddenly become good. This was epitomized last year by the expansion Vegas Golden Knights skating through the league and the New Jersey Devils jumping from last place into the postseason. But this isn’t a one-year fluke. Up-and-down jumps happen every year here.

More BuzzChomp: What is Reality in Black Mirror USS Callister?

None of these individually are as fun as Vegas’ story from 2018. The closest we had was probably Tampa Bay clowning the entire sport this season out of the Eastern Conference. The Lightning finished with 21 more points than any other team in the league. The records are crazy and put this TB squad into the conversation of best regular-season team in NHL history.

Tampa notwithstanding, this tumble dry of the NHL standings does two things. One would seem to be incredibly good, while the other is kind of pretty bad. On the one hand, literally any team in the sport can make a run into the playoffs. The only team that felt completely out of it before the season began was Ottawa, and that’s because the Senators were trading away their entire roster. (The Sens notched seven points fewer than any other team this season.) The other last-place finishers were the aforementioned Kings, the normally competitive Minnesota Wild, and the aforementioned Devils. What’s better than jumping from last into the playoffs? Certainly not jumping from last, into the playoffs, and back into last again.

The NHL is the lone sport to really find pure parity. That is a great thing in the regular season. But about this time, that makes for some uncomfortable conversations for casual hockey fans looking to get into the Stanley Cup Playoffs. What, no Patrick Kane or Connor McDavid? LA stinks now? The LA-adjacent Anaheim Ducks dropped 20+ points too and are suddenly bad now?

What the NHL has going for it is intense and year-long interest from literally every fan base. That is amazing. What it lacks is increased interest from casual fans when that should be flooding in. With so much roster turnover, it is hard to just sidle up and jump into hockey come spring time. Maybe the league doesn’t care. Maybe it shouldn’t care. But when a common April hockey article is riffling through the details to determine who casual fans should root for come playoff time, that feels like an issue. I guess you can once again just root for Canada.

Parity is great for the NHL, because it is a second-tier sport in terms of interest and revenue when compared to its professional rivals. Don’t try to be exactly like the competition. Do what they could never do and be the best at it. No other sport can claim the “parity” crown like the NHL can. This is great for your most supportive fans. Yet it kills casual hockey interest outside of the 2019 NHL playoffs. Does this even matter? How is that working out for the NBA? Don’t join them. Beat them.

The NHL playoffs are great no matter who is participating. They are even better because new teams qualify every season. While this makes following the regular season quite challenging, it does very little to hurt the sport of professional hockey. Simply look at the NBA, because its the opposite of parity. We always seem to know the top ten NBA teams every year. Does this help the regular season? Absolutely not. We think we know the top NFL teams each season, but are annually proved wrong. This is always great and the NHL has even more of those good vibes to pass around. Parity is good. Parity paired with a dynasty is the stuff of legends.

Somehow the NFL stumbled into a decade long dynasty team, as well as ample parity on a yearly basis. The NHL has not manifested itself a true dynasty, although it has several star players who have elevated their teams into annual playoff runs. The Pittsburgh Penguins are a solid example of this. MLB has lots of winning dynasties and very few championship dynasties. This is also good. The NBA has a championship dynasty and multiple winning dynasties. Every major sport is different, and therefore the state of the NHL is a positive.

I am a casual hockey fan at best, so I don’t follow the regular season. It surprised me to discover that Los Angeles was no longer good, but since I live in Los Angeles and no one was talking about the Kings, I suppose the writing was on the wall. Its fun to see new teams in the 2019 NHL playoffs. Its fun that the NHL is the best at something. Professional hockey could have easily died about ten years ago, but the sport reinvented what it was trying to be. It doubled down on its die-hard fans and stopped trying to compete with the other sports. I’d say it worked.