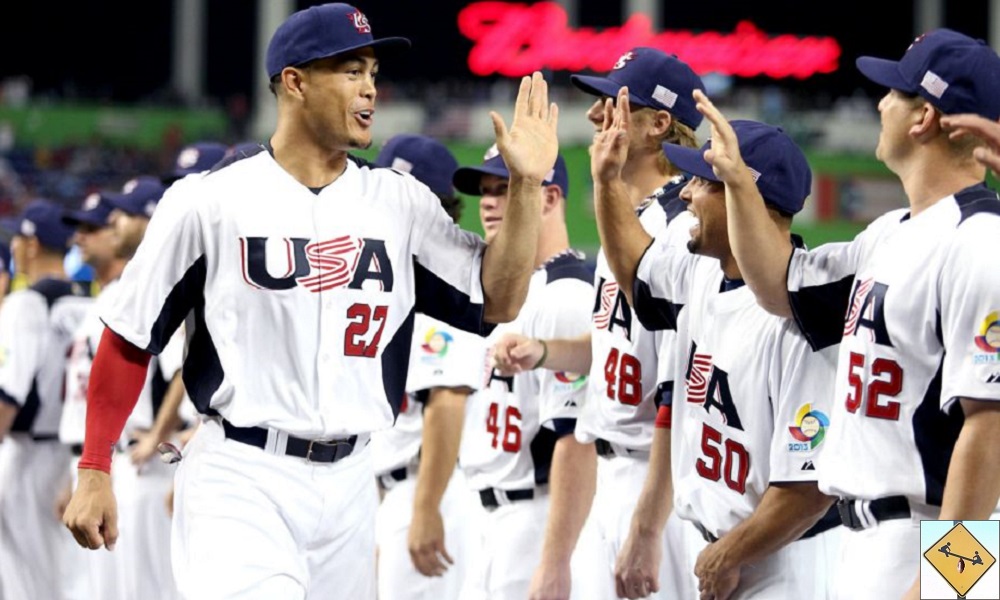 Team USA is loaded in the 2017 World Baseball Classic, just not as stacked as it could be. They are still the favorite and need to win for the WBC to grow. Baseball is back!

Team USA plays its first game in the 2017 World Baseball Classic this evening. I’m pretty sure no one cares about this tournament, but it is still interesting to me.

The United States roster is loaded…just not as loaded as it could be. The absences of Mike Trout, Clayton Kershaw and Bryce Harper are notable. The inclusions of a number of other great American players somewhat salvages this squad, though. Catcher is loaded; Nolan Arenado, Paul Goldschmidt and Daniel Murphy are some of the best players anywhere, regardless of position. Alex Bregman, Christian Yelich and Giancarlo Stanton add mystery and higher than high ceilings. The starting pitching feels somewhat lacking, but only because we imagine what the rotation could look like at full American strength. It is still probably the best roster in this tournament.

Interestingly, USA has never won the WBC. It has never even finished in the top three before. Americans don’t really care, and I think it’s mostly because the players don’t really care. No one cares that a team led by Goldschmidt and Arenado came up short. Hardly anyone outside of their city’s fan base could even recognize them. If Trout, Kershaw, Harper and others were playing, this would be a bigger deal, and the US losing would matter (if it happened). Instead, it’s just a sideshow; a nice alternative to spring training baseball.

Is there a way to fix this? There is not a great time to place this tournament. March is probably ideal, and it still doesn’t totally work. The Olympics, when baseball returns there, will be in August. Major League players never have and never will participate in that when playoff chases are in full swing. March is best, but it still doesn’t feel right.

Other countries probably care more, but that stands to reason. A country like the Dominican Republic or Puerto Rico relies on baseball. And non-baseball countries use the WBC to break into the conversation and attempt to grow the sport, like what is happening with Israel.

Team Israel is already 3-0 in the WBC, having swept Pool A and advanced to the second round before some of the other pools even threw a pitch. Team Israel, though, has zero players who were born in Israel. Israel is not a baseball country. But maybe it could be. If the team (which is composed of players of Jewish heritage who are not currently but could become Israeli citizens if they wished) continues to perform well in 2017 and then maybe again in 2021, who knows.

Maybe that is enough of a value to place on the WBC: to grow the game in non-baseball-centric countries. The US will continue to attend, but its victories or defeats won’t hold much water.

Team USA’s roster reads like a pretty sweet fantasy baseball lineup for the 2017 World Baseball Classic. Will they win the championship? You make valid points as to why its unlikely. Does the WBC need Team USA to pull off a victory? The answer is an emphatic YES. In order to grow the tournament, it must succeed at its roots and that means here in the United States.

Major League Baseball is expanding internationally and the World Baseball Classic is aiding that growth. Its working and working quite well. But it’s also understandable why American players don’t enter the tournament with a sense of pride for their country and a need to win because of it. America’s biggest baseball championship is the World Series, while every other country now has the WBC title. Other countries don’t get to participate in the World Series, but most of America does. It’s also a turbulent time in our country and that can easily kill a player’s sense of pride when wearing the Team USA jersey. Despite all of the mental setbacks that may or may not befall America’s team, they still have the best roster top to bottom in the tournament. The game of baseball doesn’t care if your roster is great, because the game is individual matchups stacked upon one another. But 2017 Team USA is the favorite and needs to win.

I like the WBC for what it represents for baseball and sports in general. International tournaments are incredibly worthwhile. It’s why international football, known as soccer in America, has so many different tournaments that span leagues and cross borders. It’s why the World Cup is the most popular championship in the world. Yet its favorites winning that brings the most fans. Underdogs make great stories, but they represent a fleeting moment in time. When the favored team dominates, its effect is two-fold. Every other fan base is galvanized together in hatred of the favorite, but the fan base of that favored team also grows. Team USA is the favorite, but unless they win, none of this happens.

More BuzzChomp: Superhero Movies Aren’t What They Used To Be


Since the WBC championship is played in America, it would go a long way towards its popularity for Team USA to win. It would make local fans care, especially if they’re pining for the MLB season to begin. It would give incentive to other American players to participate next time around. Winning Olympic gold comes with major endorsements and major money. The same is true of the World Cup, but the WBC has work to do to reach such a level. Today its an exhibition with little at stake. But create hype with an American victory and suddenly things start to change.