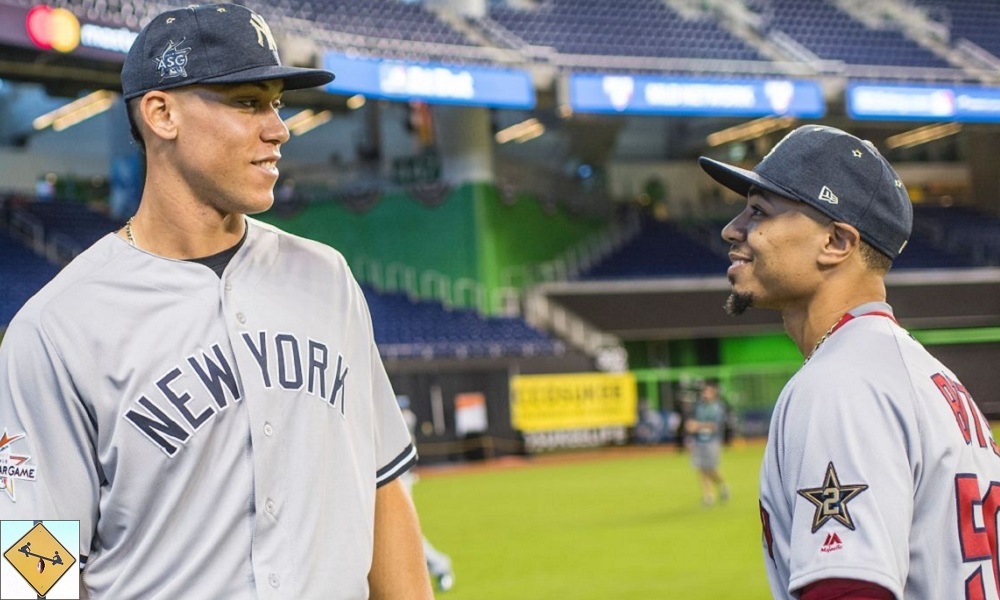 Yankees versus Red Sox is a rivalry renewed in 2018, as both teams have the World Series in their cross-hairs. Which team is actually better and who wins the AL East division this season?

We agree the New York Yankees are a talented roster with few holes, but does that give them a good enough team to win the AL East this season? The main competition will be the Boston Red Sox. All of Toronto, Tampa Bay, and Baltimore appear to be pretty weak. Toronto aged out of contention and needs to rebuild. Tampa Bay is selling off assets like the Marlins of the American League. And Baltimore is perpetually average. Its Yankees versus Red Sox once again in 2018.

Boston is good; we know that. But how good? The Red Sox had offensive troubles a year ago, as they struggled to hit for power. This offseason, they added J.D. Martinez and now have pretty amazing depth to their lineup. Assuming Martinez is the everyday DH, Hanley Ramirez and Mitch Moreland are in a first base timeshare. Once Dustin Pedroia comes back, Eduardo Nunez is a super utility player. The lineup lacks the biggest boppers of the Yankees, but it is arguably deeper across the board.

Despite Boston having the best closer in the AL, New York cannot be challenged when it comes to the bullpen. Since both teams have brand new managers, I don’t know how to split the difference there. One being good and the other being very bad could factor into the standings, but it is impossible to know which would be which at this point. That leaves the starting rotation as a deciding factor in the AL East race.

New York is set and happy with its rotation, but the quintet is surprisingly fragile. Luis Severino was a Cy Young contender in 2017, but that doubles as the only quality season of his budding career. We can’t be sure how much he’ll drop off from that high. If Masahiro Tanaka or CC Sabathia go down, the depth will come from the bullpen, siphoning off the likes of Chad Green or Adam Warren. The bullpen has pieces to shed, but that isn’t an ideal scenario, especially since both guys are better served out of the pen.

Of course, no team can survive a ton of injuries to its rotation, the Red Sox included. As it stands, Boston is already expected to be without Eduardo Rodriguez and Steven Wright to start the year. That leaves a top four of Chris Sale, David Price, Drew Pomeranz, and Rick Porcello, with fill-ins holding down the final spot. That top four is good, but the six-man depth is already gone. The one edge Boston probably had here over New York has disappeared before March.

The Yankees feel like the team with the higher upside, though perhaps Boston is a safer bet in a worst-case scenario. If I had to pick a team to win 100 games, I’d go with New York, thanks to that star power. If we were banking on one to definitively win just 90 games, though, Boston feels safer to me because of its lineup depth that can survive slumps from nearly any individual piece.

Considering the weak competition in the AL East, both Boston and New York appear on track to win 90+ games this season. Determining which team is better and will win the division itself is a far trickier prediction. Yankees versus Red Sox is once again stealing the spotlight of Major League Baseball. Forget Cubs versus Cardinals or Dodgers versus Giants, because the only rivalry with cache is the one renewed. Two teams with sights on the World Series must first battle for the division crown.

The Red Sox stuffed their pitching staff with big names. New York accomplished a similar feat in their lineup. Both teams match up exceedingly well with dominant players around the diamond and in the pen. Since the Yankees and Red Sox each have rookie managers, there is little on paper to separate the two teams. Will expectations play a role? How about pressure?

The Yankees have higher expectations entering 2018. They reached game 7 of the ALCS in 2017 and have loaded on to their already formidable lineup. Questions are less so in the pitching staff this season, meaning everyone in New York fully expects the Yankees to get farther than a year ago. Doing so means topping the Red Sox, Astros and Indians. It means playing better than a near perfect storm which led to their great season in 2017. They have the talent and I do not expect expectations to hold back the 2018 Yankees.

The Red Sox have more pressure entering 2018. Boston won the division last year, but you wouldn’t know it. They got bounced by the eventual World Series champions, but it felt like Houston pushed aside the Red Sox. While New York led their series against the Astros and pushed them to the brink, Boston fell quietly. The Red Sox’s season felt like a failure to live up to expectations, putting pressure on the team to improve with a rookie manager in 2018. This subtle difference is my deciding factor.

I’m picking the Yankees to win the AL East this season and finish a few games ahead of Boston, the reverse of how last year concluded during the regular season. Yankees versus Red Sox is a renewed rivalry that will come down to the final weeks. Injuries don’t concern me and a lower pitching ceiling is easily remedied at the trade deadline if necessary. Pressure trumps expectations, yielding three to five more victories to New York.