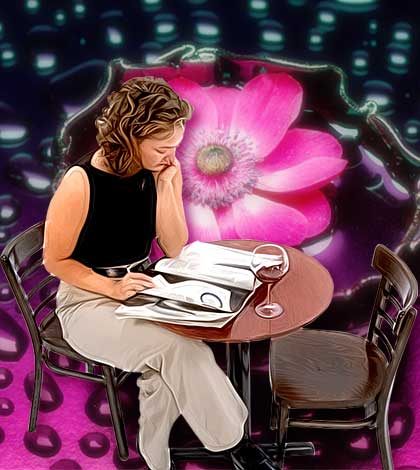 I have a dear friend in her early 40’s. She’s got it all, a great personality and a great life. As a dedicated triathlete she’s physically fit and attractive. Well dressed, well-bred, and owns her own apartment in Manhattan (no small feat). She’s inclusive, warm and open. Oh. And… she’s single.

She recently met a guy online who was knocked out by her photos, bio and personality on the phone. He’d found the “total package.” So, he asked her ”Why are you still single?” This was confusing to him. A terrific woman with so much going on, there must be a catch. He needed to speak to one of her friends and get the “real story.” That friend was myself. We spoke for over an hour.

Why is it automatically assumed that something’s wrong with a woman who’s single? But the man who’s asking this question never asks it of himself?

It’s not just the men who perpetuate this double standard. A few years ago I overheard the same thing said about me. In a conference room swarming with women a lady said to my colleague, “She’s so lovely and interesting. I can’t believe some man doesn’t want her!”

Our current time period has the greatest amount of single women, ever. It’s not due to some bizarre quirk or character defect. The women I know who are single and dating have a vast selection of men who want them. But, they also have options. Being self-sufficient and living meaningful lives means they don’t want to settle for just anyone to appease society’s wishes. They want the real deal. And if it takes waiting, they’ll wait until they find the right man with whom they can create a meaningful partnership.

They’re not the only one’s unwilling to settle for less.

The 2010 U.S Census Bureau found that 44.9% of the unmarried population aged 18 and older are female. For every 100 unmarried women there are 88 unmarried men. (“America’s Families and Living Arrangements: 2010″). No one’s asking what’s wrong with these men.

Recent Pew Research statistics on Social and Demographic Trends show that barely half of all U.S. Adults are married (a record low). This isn’t solely an America phenomenon. It’s a current reality in economically healthy countries worldwide. Within the span of two short years the data from the U. S. Census Bureau has risen. As of 2012, “There are 112 million unmarried people over age 18 in the U.S., representing nearly 47% of the adult population.”

It appears that being single is preferable to the notion of being married (just to not be single).

Modern women want love. But they also know their worth. My friend’s story is like so many others I hear. She’s had her share of players and confused men. She’s had offers of marriage. She’s not insecure, defective or emotionally unavailable. She “wants to wake up to the same man every day for the rest of her life.”

She has a code of conduct and values. She wants a special man; one she can love and admire her whole life. And that’s why she’s still single.