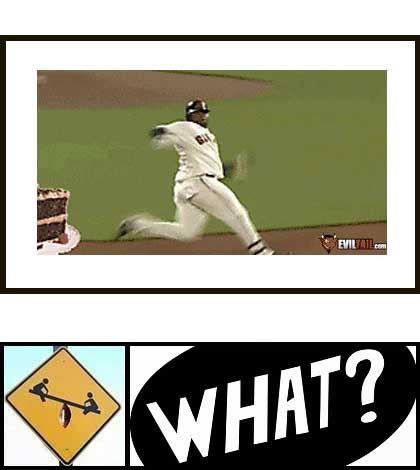 Description: It’s obvious that Pablo really wanted the triple, but he neglected to avoid the big nothing in the base path. Putting it another way, the only obvious reason for his tumble is the birthday cake which EvilFail.com thankfully added to Sandoval’s shame. So I leave it you, what happened? What REALLY happened?

Baseball players are not known as the most graceful and athletic professional athletes around. They are often criticized for being overweight and slow. While NBA players are superb leapers and majestic in the air, and football players are massive powerhouses of adrenaline-filled bursts, a Major League baseball player can be a schlub who swings a quick bat low in the zone.

Pablo Sandoval may be a perfect example of the stereotype. One brief glance at the right fielder/cake threw off his balance, causing his feet to tangle amongst each other.

Of course, someone like Edwin Encarnacion is capable of redeeming the entire collective. Just look at him motor around the bases, with the utmost balance and precision.

[Credit EvilFail.com and TheScore.com for these awesome GIFs]