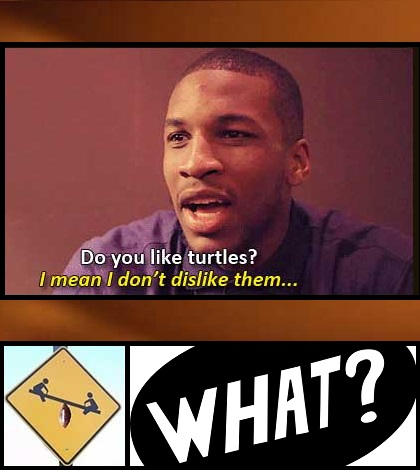 Title: “The Most Important Line of Questioning in Interview History”

I can’t help but feel as though he had his answer prepared for this question. First, I’m sure he gets asked this all the time. Second, his answer is perfect. He keeps the turtle people happy while also not jumping on any turtle bandwagons. It was the perfect political response to keep his name out of the media tabloids.

The thing I am really wondering though is whether this reporter was immediately fired after the interview ended, or did they fire him during the interview, as this question was being answered?

Simply brilliant. I hope the reporter won an award for this and was given a swift promotion to boot. Too many people ask athletes about their team, about how the last game went, or that matchup with the Spurs that’s looming in the playoffs. No one ever asks about the family pet. Or what kind of pet one might enjoy owning, or if they “like turtles.” Simply…

I can’t keep up the charade. Poor Mr. Robinson, he got blindsided by this obviously leading line of questioning. This reporter was fired directly following Thomas’ answer. He gave his opinion on turtles and then was asked to go use the bathroom so they could replace the reporter post haste.

The axed reporter, we’ll call him Bobby, wanted to make a statement. Bobby wanted to rile up PETA and get the animal rights activists salivating for blood. He figured any question about turtles would lead to turtle soup, frog’s legs, and other disturbing culinary trends. Oh how wrong you were! Thomas Robinson does not dislike turtles and he isn’t afraid to share. Barely aggressive words from a proud athlete.

[credit heybelinda on Tumblr for this awesome GIF]