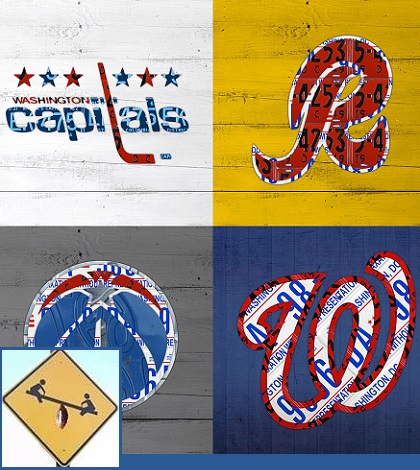 Washington DC sports are kicking its fans while they’re down. Despite winning records, the Wizards’ and Capitals’ seasons ended in misery. The Nationals are struggling and the Redskins stink. Is all hope lost in DC?

Hooh boy, it has been a tough recent stretch here for Washington, DC sports.

First, the Washington Redskins stink up the joint, going 4-12, and finish in last place in the NFC East once again. They collected the worst point differential in the conference; yes, worse than the team with the worst record, the Tampa Bay Buccaneers.

Questions remain for the 2015 season about the viability of Robert Griffin at quarterback, about the usability of the team’s nickname, and about the ability of Washington’s management crew of coach Jay Gruden and owner Daniel Snyder.

In baseball, everyone’s World Series favorite, the Washington Nationals, start off the year horrendously. They have since began to turn things around and rank second in a putrid NL East, but the ease that everyone expected this team to win with is out the window. Also, former staff ace Stephen Strasburg seems to be regressing in his sixth season in the majors.

Then the Washington Capitals lose in the Stanley Cup playoffs in gut-wrenching fashion. After being up three games to one over the number-one seed New York Rangers, the Capitals lose three straight, including an overtime game seven on the road. The Caps now have a dreadful streak going of playoff game seven ineptitude.

Lastly are the Washington Wizards. Here’s the situation: the Wizards are down three with a few ticks remaining and get the ball to big-shot maker Paul Pierce, who had only made one field goal up to this point. Pierce takes a couple of steps wide and launches a three as the buzzer sounds…and hits it. Again. Pierce does it again, only this time he didn’t. The shot was released too late; the ball still in his hands as the light went on. For likely the first time in NBA history, a playoff series ended in replay review.

Now Pierce says he may retire, and can you blame him after that stomach punch ending? But it’s not just the Wiz that have DC fans shaking their heads. The entire city seems to be going through sports doldrums. Other cities have had it worse for sure, but this is quite a stretch for DC.

Despite the fact that three of the four major sports teams in Washington DC are currently winners, I completely agree with the air of losing surrounding the city and its clubs. There’s something off about DC sports right now, and its hard to explain.

On one hand, the Capitals and Wizards both were playoff teams. Both played to the wire in close series. Yet both lost in gut wrenching fashion. The Nationals are also very good, yet are consistently failing to live up to unrealistic expectations. Then there are the Redskins who had a superstar quarterback, only to run him into the ground and watch as the team disintegrated around him.

I don’t know how to rank Washington DC sports right now. The heartbreak and fan futility is at an all-time high, yet the actual level of losing is nowhere near a level to complain about. This presents the DC sports fan with a lose-lose situation. The teams are not quite good enough to win championships, but just good enough to provide hope.

Outside of the Redskins, who seem destined for another losing season simply because the division keeps improving more than they do, the other three major DC sports teams are technically winners. The Capitals and Wizards were winners in the regular season standings, while the Nationals are winning. But I digress, there is no happy feelings to be had in the nation’s capitol.

Paul Pierce is not replaceable on the Wizards short-term. He’s a hall of fame player, simply put, and its hard to imagine Washington besting the Eastern Conference without him. Same goes for the Nationals, who need Stephen Strasburg to dominate this season if they have any hope of playing into October. The lone exception is the Capitals, who should rebound nicely next year. But if past luck is any indication, they too may be in for a regression.

This begs the question of what is worse. Do you want to watch your teams make the playoffs, only to lose in stomach punching fashion? Or would you rather all your teams stink, get high draft picks, and hopefully build a true winner down the road?

More Sports: Are the Warriors favorites to win the NBA Finals?