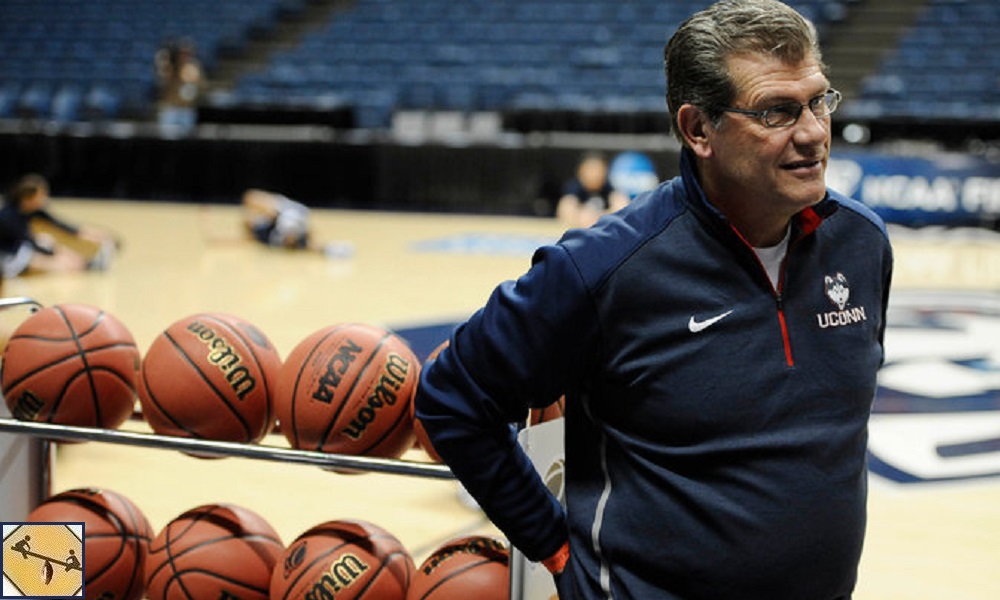 UConn women’s basketball has won more than any team in the history of sports, but is their coach Geno Auriemma the greatest coach in history? When will his genius be fully acknowledged?

On Saturday, the Connecticut Huskies women’s basketball team defeated SMU 88-48. The win was UConn’s 91st in a row, breaking its own NCAA Division I basketball record. This is obviously insane. It is even more insane because of the details surrounding the win.

Geno Auriemma’s squad wasn’t supposed to be as great this year. Last year’s version went undefeated and then lost three seniors to the WNBA. Those three players were drafted first, second, and third overall in the draft, which is something so ridiculous, it doesn’t even translate to men’s basketball. So to begin this season, the Huskies were not ranked first in the country. They weren’t ranked second either. According to the AP voters, there were at least two schools better than UConn heading into the 2016-17 NCAA season.

Fourteen wins later and that no longer feels like the case. Besides winning 91 in a row, UConn has won 138 of its last 139 games. I can’t help but feel like, at this point, many opponents lose to the Huskies before they even step foot on the court. Like Tiger Woods in his prime, the mystique, aura, and imposing nature of the Huskies psyche out the other team before the game begins.

The question that always comes up when talking about UConn is whether its dominance is good for college basketball. This is a logical argument since, really, how much can you say about a team that continues to win easily every time it tips off? My argument has always been that it is very good for women’s basketball, because without UConn, no one would be talking about the sport at all. UConn winning 91 in a row makes headlines obviously, but the team actually losing a game is noteworthy anytime it happens.

The continual winning is almost a self-fulfilling prophecy. Just as opponents feel intimidated before the game begins, the Huskies players feel a sense of need to succeed. Auriemma describes it as, “when there’s a play to be made, there’s no, ‘Can I make this play? Am I good enough?’ Instead it’s like, ‘I have no choice but to make this play, because I’m at Connecticut.’ ” The players also know this pertains to every game. “A lot of people are coming to watch us play, and we have to put on a show for them,” said Gabby Williams. It is probably why UConn never falls victim to an unexpected upset like normal teams in both men’s and women’s basketball.

I’m not sure why Auriemma doesn’t get more credit for probably being the best basketball coach of all time, regardless of the gender of the players. He has so dominated his sport that his team losing is more surprising than it winning 91 games in a row.

The UConn women’s basketball team is the winning-est team in the history of ALL sports and obviously Auriemma deserves significant credit and more credit than he has received. As head coach, he is the only person representing continuity from season to season, along with his coaching staff. He is the only person that has been there for all 91 straight victories and all 138 wins out of 139 games. Auriemma’s team has not lost in over two and half years.

Why has the best coach in history not been labeled as such? I believe this is a case of society finally realizing after the fact just how great he actually was. Often we don’t realize someone is a genius until they are gone. The person is simply part of our lives and until there is a void that is unable to be filled, we don’t recognize their greatness for the unbelievable genius that it was. Such outright domination of any field is rare, but usually when it happens in sports we are able to quantify it. Usually we can give it context or slap a label on it. But this has not happened with the UConn women because the team has annihilated the possibility. Their streak is too long and the team has been too good for too many years for anyone to ever quantify it or provide context. Oddly enough, Auriemma has not been slapped on as a label quite like Nick Saban has at Alabama or Bill Belichick in New England.

Women’s basketball will never achieve the popularity of a men’s sport, barring unforeseen societal changes, but the game is better than ever due in no small part to UConn women’s basketball and Auriemma. While its true that Connecticut has only lost once in 139 games, a period that spans multiple seasons, the mere fact that they are so good forces every other women’s team to elevate their game to compete. It forces the entire sport to be better simply to keep up. That makes the professional game in the WNBA better as well. Better basketball means more young women want to play and more talent enters the sport. The trickle down effect is huge and similar to what happened after UCLA’s dominance of men’s basketball many years ago. The Bruins won 88 consecutive games before losing in 1974 to Notre Dame. Coincidence or not, the NBA exploded in popularity not long after.


Time will elevate Auriemma to his proper seat atop the sports world’s podium. If UConn wins over 100 straight games and goes on to win this season’s championship, perhaps we will celebrate his greatness in the moment. But there’s no doubt Auriemma will ultimately become a thing of legend and his coaching greatness recognized for what it was. The best we’ve ever seen.