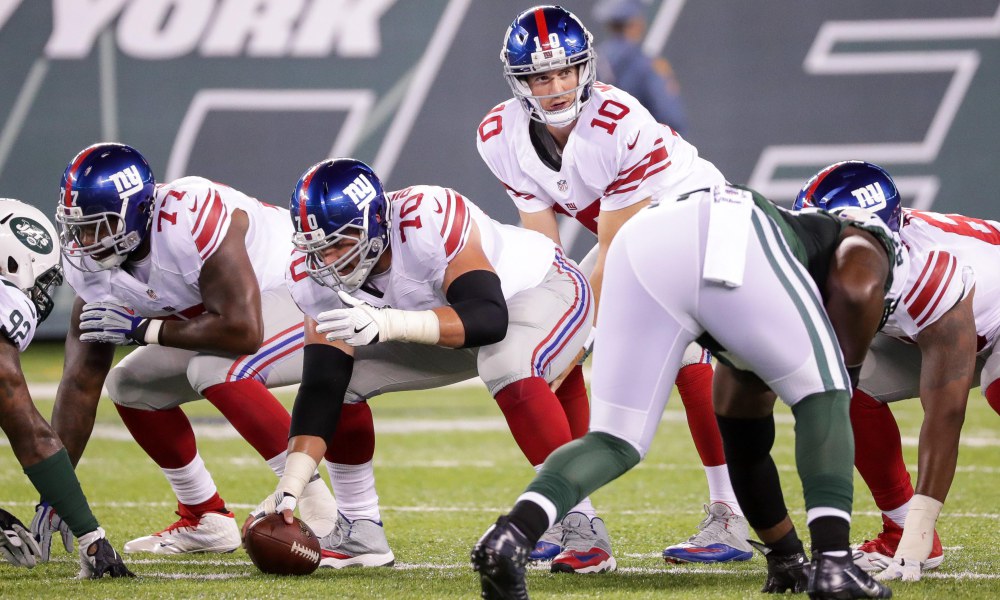 The New York Giants have a lot of work to do this offseason. Good or bad, two of their weakest units are going to be starting from scratch in 2018.

The New York Giants were a bad football team in 2017. The offense was bad. The defense was bad. Special teams were very bad. The coaching was bad. Coaches were fired. A new regime begins in 2018. Despite numerous holes, arguably the two biggest weaknesses of the New York Giants in recent years have been the offensive line and the linebacker corps. Ironically, coincidentally, or perhaps luckily, those two units are set to be absolutely decimated this offseason.

Let’s start with the offensive line. New York hasn’t had a good offensive line in quite a while. A top-10 draft pick seems to have been wasted on left tackle Ereck Flowers. Right tackle Bobby Hart was already released by new leadership. The line’s two best, Justin Pugh and Weston Richburg, couldn’t stay healthy last season. It all added up to disaster, but even when the team succeeded in 2016, the line held the offense back dramatically.

ALSO ON BUZZCHOMP: The Problem with 2018 Winter Olympics a Matter of Degrees

That is the group that heads into free agency with the following pieces set to be unrestricted: Pugh, Richburg, and DJ Fluker. Not counting Flowers, who remains simultaneously incredibly important and not very good at football, those three are three of the team’s top four offensive linemen. This is either terrible news or great news, with no in between. On the one hand, a terrible line cannot afford to lose any useful pieces, especially some of its best. This will set New York back even further, perhaps to a level no offense could recover from.

On the other hand, sometimes bad units need complete resets. This is the perfect opportunity for management to reset the entire line. Pugh could come back since he plays essentially any non-center position on the line. Flowers could move to right tackle. A new left tackle could be added. Brett Jones and some of the younger guys could get some play. This is an opportunity to pull a hard reset on a unit that sorely needed it. A lot of work must be done from this point, but necessity precipitates change.

Defensively, linebacker could be considered the weakest link, and it hadn’t been particularly close. Under Jerry Reese, the Giants took the strategy of essentially punting the positional group, spending all available assets on coverage and pass rush. This isn’t a terrible idea, as those groups are certainly more important than linebacker. However, when the middle of the field becomes a turnstile of replacement-level players, opponents take advantage. The Giants could never cover tight ends, and when the front four failed to get pressure, the defense wilted.

Linebacker needs to be a point of more emphasis, since it was no emphasis whatsoever. Just like offensive line though, we are about to see a complete overhaul of the group. Keenan Robinson, Jonathan Casillas, Kelvin Sheppard, Mark Herzlich, Akeem Ayers, Deontae Skinner, and Devon Kennard are ALL unrestricted free agents. (Skinner was waived.)

Outside of BJ Goodson, who suffered through injuries last season, free agents account for nearly every player of note from the entire depth chart at linebacker. No one remains. Again, like o-line, it is hard to tell whether this is a good thing or a bad thing. Bad units need holdovers to build consistency and get on the right track. On the other hand, bad units were bad for a reason. Holding onto players who were responsible for underachieving isn’t an intelligent way to get better.

It will take a lot of work to refill the linebacker corps just like it will to replenish what will be lost on the front five on offense. Depending on what new GM Dave Gettleman is able to accomplish, those decimated groups could be the best thing or another death sentence for a team looking to rebound.