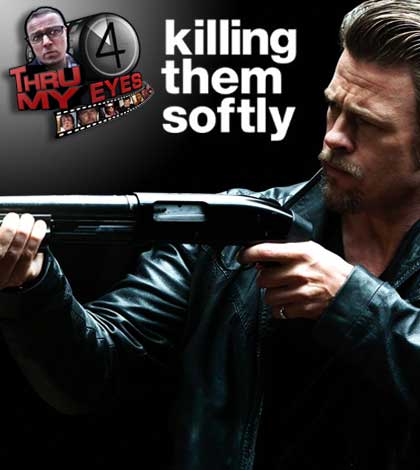 A lot of people say how similiar I am to Brad Pitt.  They say the only differences between Brad Pitt and yours truly is our faces, hair, body, and skin.  Other than those things that I  just listed,  we are practically twins.  From outer space you can’t tell the difference.  Back to the matter at hand, Killing Them Softly is the latest flick by Mr. Brad Pitt aka “My Twin”.  Directed by Andrew Dominik (you won’t know anything else he directed so I didn’t list it here), also stars Ray Liotta (Goodfellas), James Gandolfini (The Sopranos), and Richard Jenkins (you might know him from the 1991 TV movie, Kojak: Fatal Flaw).  Brad Pitt can play any type of character and he seems to do it with ease.  Brad plays a hitman in this one and of course looks cool doing it.  Even though he plays a hitman, he does it where you are on his side the whole movie.  Like I said, Brad Pitt and I have that quality about us that makes the kids look up to us, men aspire to be us, and women want to have sex with us.  Killing Them Softly also has some underlying political tones that are peppered throughout the movie.  You hear it through the car radio, the television during the bar scenes, and Brad Pitt’s last sentences.  I would guess the Director is Republican.