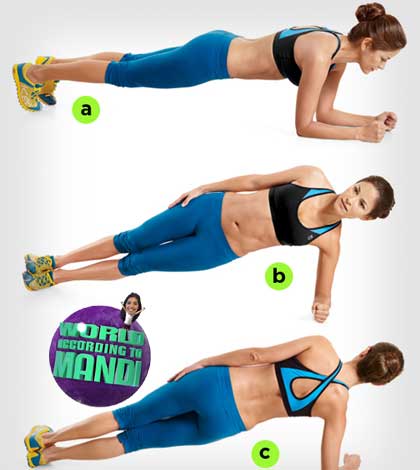 Plank is one of those dreaded words, an exercise full of challenges. Have you ever been in a yoga class, or a fitness class, where the instructor says drop into plank? How about going down on your forearms into forearm plank? Even worse kids!

The exercise can be brutal, but that is the power of plank. What if instead of feeling dread, you felt joy? You choose to love every second of your plank.

In recent years the fitness community has embraced all styles of plank: forearm plank, regular plank, and side plank. Whatever your fancy, there is a challenging plank exercise for you! It’s now touted as being better for your core than traditional ab exercises.

I mean let’s face it, anyone who has done some version of plank knows it’s the truth. It targets and works your entire core!

Dreading plank is easy, but much like the exercise itself, embrace the mental challenge. I used to dread the exercise like everyone else, but once I chose to enjoy plank, it all changed for me. I was once in a yoga class where the instructor challenged everyone to hold the traditional version for five minutes. YES, five minutes! I thought he was crazy, but I went along with it. My man was beside me in class, and while everyone else dropped like flies, the two of us continued to hold that bad boy for five minutes. Afterwards we both confessed that neither one of us was dropping unless the other one did. From then on I was in love with plank!

My first ever 30 day fitness challenge was a plank challenge. During those thirty days I worked myself up to a five minute plank, and it was awesome. I’d already done five minutes straight before, so I knew I could steadily work my way up to it again. Don’t get me wrong, it was challenging and I fought through the shaking and sweating, but I did it! The accomplishment was wonderful, and since then I’ve done many fitness challenges that include plank or the forearm version. Because I have that notch on my belt, the exercise is no longer an obstacle. I no longer dread plank!

Embrace the plank! Embrace how you feel in the moment, all the good and bad feelings and thoughts rushing at you. Suck in your core and stay strong. Your body can hold plank forever, it’s your mind that needs convincing. So prove it to yourself, embrace the exercise, and let it be a breeze!

Therein lies the secret power of plank. Once you embrace the moment, you’ll love it. Isn’t that just like so many other confronting exercises? Isn’t that just like challenges in life? You look them right in the face and don’t back down. After that they’re no longer confronting, no longer a foe. Form camaraderie with that plank. It won’t break you. It only makes you stronger.

Finding the power in this excellent exercise was one of the best things I ever did for myself. I don’t fear its name anymore. I don’t moan when it pops up in yoga, or any other workout class. We’re buddies now! I’ve embraced the power of plank! Will you?