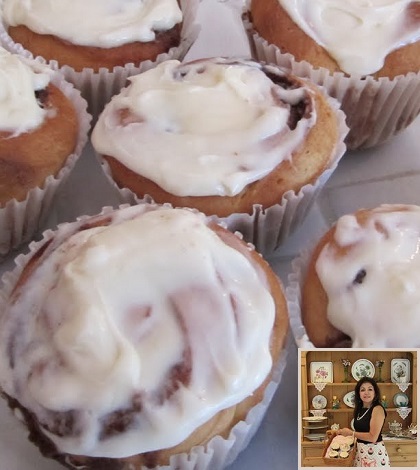 Growing up my mother made the most wonderfully delicious Cinnamon Buns recipe, or as we liked to call them, sticky buns.  We’d have them as a breakfast treat, an afternoon snack, and even dessert after dinner. Cinnamon buns were an all day treat!

Years later my mother shared her recipe with me, including her special recipe for sweet yeast bread. I’ve now incorporated her recipes into these absolutely scrupulous sinful Cinnamon Buns.

Mix all of the ingredients in a medium bowl until combined. Set aside until dough is ready.

Mix all of the ingredients in a medium bowl until combined. With an electric mixer, beat until smooth. Set aside until cinnamon buns are ready.

Pour remaining milk into the bowl of a stand mixer fitted with paddle attachment.  Let the milk get almost cool. Stir in one cup of flour, salt, sugar, and butter. Then add dissolved yeast mixture.

Turn dough out onto a lightly floured work surface. Kneed until smooth and elastic, adding more flour if sticky, about 8 minutes. Form into a  ball.

Lightly oil a large bowl with a nonstick spray. Transfer dough to bowl, turning to coat. Cover bowl with plastic wrap, then a kitchen towel. Let dough rise in a warm draft-free area until double in size, about two hours**.

Punch down dough. Transfer to floured work surface.  Roll out into a 15 x 11 inch rectangle. Spread filling (as prepared above) evenly over dough, leaving 1/2 inch border. Starting at one of the long sides, roll dough into a log, pinching gently to keep it rolled up. With seam side down, cut dough crosswise with a sharp knife into 12 equal slices.

Fit two extra-large muffin pans with paper liners. Place one slice of your log in each cup of your muffin pan, cut side down. Cover with plastic wrap, then a kitchen towel.  Let dough rise in a warm draft free area until double in volume, about 40-45 minutes**.

Ice with a cream cheese glaze (as prepared above).  Serve warm or at room temperature.

**I like to set my oven to warm, and once it is preheated, turn off the oven and put my dough to rise in the warm oven. I also put my cinnamon buns to rise in a warm oven.