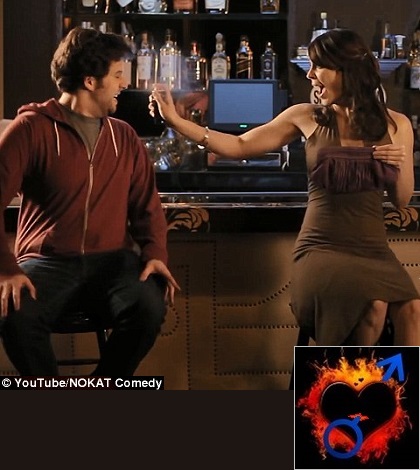 I am aware pick up lines in the traditional sense do not work.

Not even I am brave enough to walk up to a complete female stranger and say “Your pants are like Windex. I can see myself in them.”

The only way for a guy to pull that off is if he looks like this. That is the only way.

“Did it hurt when you fell from heaven?”

For the rest of us, developing game or personality is critical. Yes, it is not always easy to walk up to a complete stranger and get rejected, but actors do it all the time. You wouldn’t be a good actor if that didn’t happen on a few occasions. That should be your mind-set. Every good actor I know is confident in their skills. Sometimes the part calls for a tall red-head. If you’re not a tall red-head, that’s ok. It doesn’t make you any less of an actor, it just means you are not right for that particular movie. Keep this seemingly simple concept in mind when it comes to women. Girls have flat out told me I have no business talking to them and that’s a good thing.

Quick side story. My friend who looks like Jake Gyllenhaal was self conscious about his looks. Unlike myself, he has that Mid-Western nice guy personality, so it’s not like he is a jerk to anyone. I walked up to two girls with him and asked them flat out, does he have anything to be self conscious about? They looked and said no, but pointed out that I do. I simply walked away and left Jake to talk to the two girls. So yes, it happens to everyone.

Call me old fashion, but the gentleman (maybe the wrong word, but we’ll discuss that later) should make the first move. Either because you notice her or she keeps looking over at you, make the first move guys. When you do this, think of a proper tactic before approaching her. Simply walking up and doing the awkward stand by her method is creepy. By the way, tactic is the correct word for hitting on a woman. Bill Belichik doesn’t go into a contest without a sound game plan. For those who want to “wing it,” don’t. Just don’t.

Just so you’re aware, the following scenarios apply to girls at parties or drinking at bars. If you’re at a club and four girls are dancing with each other, stay away. Girls go out to dance with their lady friends. Your success rate is not going to be very high if you attempt it. Unless you are a very good dancer, standing around with your bros ogling the twerking, grinding, dancing women is not attractive. The only way clubs work is if you’re sitting in the VIP section drinking champagne. Even then, do you really want a girl who is talking to you just because you’re in the VIP? Well …. for relationships that doesn’t work. For other reasons that is a perfect place.

Just remember women are attracted to confidence. No matter what you say, just be confident about it and everything will work out.

1) Ask Her Opinion About Something.

Yes gentleman, more women than men attend college. That means chances are she is smarter than you. Accept it. This can also be used to your advantage. Smarter people tend to have opinions and thoughts about a variety of topics. Think of something stupid that isn’t going to offend her. NO Supreme Court cases, politics or religious topics. You don’t want it to become a heated debate or worse, a la this pic.

You’re going for a playful conversation starter, so ask her what shots your friends should do. What is a good type of beer? Did you play Sega or Nintendo as a kid? Is twerking something real women do? Anything that can lead to a playful debate or start an interesting conversation. I used to ask “would you ever talk to a man who drinks wine at a bar?” It had decent results.

2) Use Pick Up Lines As An Opener

I’m not implying you tell a woman her outfit is going to look better next to your bed in the morning, but use one of the obvious bad pick up lines and make fun of it. More specifically, make fun of the type of guy who thinks they actually work. Try this exchange for example:

Man: “Has someone tried to hit on you with a bad pick up line tonight?”

Man: “Good thing I brought my library card, because I’m checking you out.” Yes, the hands must turn into imaginary guns and shoot during the checking you out part. “That can’t be the worst one some guy has tried to use on you.”

There you have it. You have started a conversation which makes fun of a type of guy that both of you probably do not hang out with. I guarantee every girl has been hit on by someone who is bad at it. Their failure can be your success.

If you don’t want to go with anything I have said so far, I have one more. However, this one is technically a pick up line, but does not come across as such. It is the ninja of all opening lines. You approach a girl and as normal as you can, deliver:

Man: “Excuse me, I’ve been working up the courage to walk up to you and say something clever, witty, and hilarious. Do you want to hear what I came up with?”

Man: “I couldn’t think of anything. My name is (insert name here). What’s your name?

If the girl actually wants to talk to you, she will continue and spark up some banter with you. If she looks at you like you just drowned a puppy, move on. There is no shame in getting shot down. Sometimes a girl just wants to have a drink. Or you’re just not what she wants. However, if you don’t approach her, how would you ever know?

By the way, if you’re a woman and want to meet a guy, just walk up and say hello. You don’t need game if you’re half attractive. Men are easy and you just need to be present.