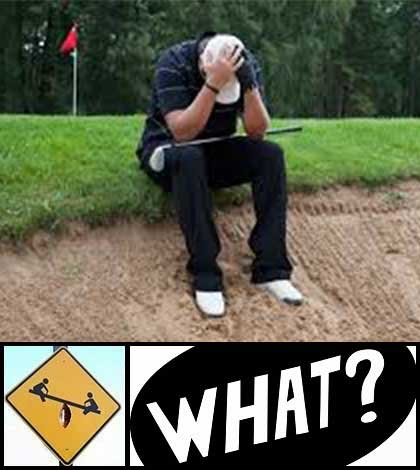 It’s a Summer Sports Quote Game golf edition of “They said what?” because summer means sports and golf is funny. Especially if you’re bad at it. Which famous man uttered this less than famous golf quote?

After two rounds, Dan and Todd are tied at 2 points each.
Now for round three. “They said what?”

Back for another installment of They Said Whaaat? Here is the sports quote for you to decipher:

“I know I am getting better at golf because I am hitting fewer spectators.”

Hint one: This speaker was not famous for playing golf but excelled at college football.

Hint three: There is an airport named after the person who said this quote.

Get your airport naming rights today.

Damn, talk about three very different hints and one very funny quote. Whoever uttered these words is not just famous, but also quite amusing. Although I’d probably hit spectators too if I was playing in celebrity events.

Hint one removes golf, but the fact that this man excelled at college football says he’s an athlete and little else. Perhaps it gives scope to his actual profession that brought his fame.

I’m not getting any closer to an answer with hint two, although I’m guessing its a veiled attempt at giving it away. Is the guy a former president, an actor, or both?

Now we’re talking. I can think of several airports named after famous men, but only a few that may have been successful athletes. I ruled out John Wayne and John F Kennedy. This leaves me with one guess that hopefully covers all the hints and is correct.

Ronald Reagan is the famous actor and president who uttered this silly quote.

You followed the correct reasoning but arrived at the incorrect destination. I don’t believe Ronald Reagan had any particular affinity towards sports, in this instance college football. I wonder if you would have picked out the correct quote-giver if I had replaced hint number three with something referring to his cameo instance on an episode of The Simpsons.

The former college star, former president and current airport-name holder and the man who said this quote is Gerald Ford.

Oh man, I totally would have guessed Ford if you’d used that hint! Good thing you chose otherwise, I suppose. Time for my rebuttal.