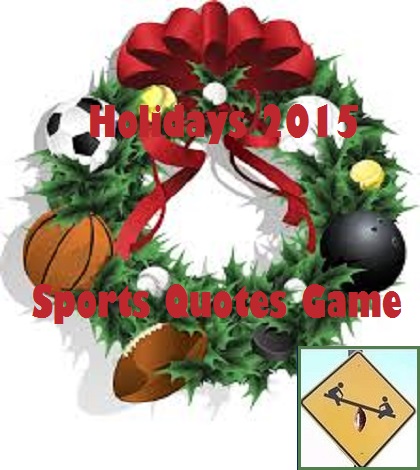 We’re kicking off the 2015 Holiday season with a new Sports Quotes Game! Someone famous said something profound. But who? Its our Holiday 2015 edition of “They said what?” sports quote game.

The Rules at Seesaw Sports are simple:
Player 1 presents Player 2 with a sports quote.

After five rounds, Todd is ahead with 6 points, to Dan’s 4 points. Its do or die time.
“They said what?”

We’re kicking off the Holiday Season with everyone’s favorite game “They Said What?” Football is hotter than ever, and the NBA and NHL are begging for attention, but this sports quote is anything but.

Who uttered these encouraging words?

“To be successful, you must dedicate yourself 100% to your training, diet and mental approach.”

Hint one: This person began as an athlete, but is best known for other pursuits.

Hint two: They reached the pinnacle of their sport, winning its highest title.

Hint three: The individual was a known steroid user, making this quote rather ironic.

It has to be Arnold Schwarzenegger; just has to.

He was a body builder but is better known for other pursuits. He won the Mr. Universe title, his sport’s highest pinnacle. And I am pretty sure he took some solid steroids. I know Sylvester Stallone did steroids, but he doesn’t meet the other criteria. I don’t remember a Schwarzenegger quote about his steroid use specifically, but I will just assume it’s a known fact at this point, meaning he answers hint three as well.

Despite the source, it’s pretty good advice, right? Dedicate yourself to training, diet and mental exercises to succeed. As a different old saying goes, “do as I say, not as I do.”

Wow, I did not think this would be so easy. Arnold Schwarzenegger is correct. There were so many hints that I had to avoid, so as not to completely give away the answer. But despite my best efforts, you’ve bested me once again.