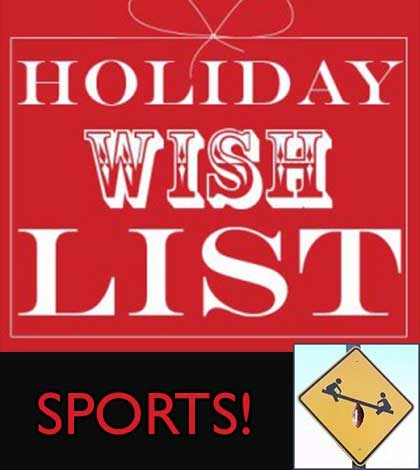 Lots of teams need help throughout the world of sports, but only Santa Claus can make these wishes come true. Our Sports Holiday Wish List, from the NFL to the NBA and College Football. This is what we want for Christmas.

Christmas is on the horizon, and that means it’s time to send in your sports holiday wish list to Santa. If you’ve been good this year, perhaps he will bring you a few of the things you want. If you’ve been bad, well, everyone gets sump’n.

1) A new head coach for my New York football Giants

The Tom Coughlin era has run its course. The Giants team is a mess on both sides of the ball. Coughlin has no control over the discipline of the players, late-game execution, defensive effort or even penalties and turnovers, two Coughlin stalwarts.

He’s been a great coach for this franchise, leading them to two Super Bowl titles. But everyone sees their time run out. New York needs a new leader whose advice the players will heed.

No one cares about these bowl games. I don’t even care about these bowl games, but this is Frank’s last one. The team hasn’t been good under him recently, but he’s been the best coach in school history and one of the greatest college coaches of all time. That deserves a victory over Tulsa at least.

Greg Bird got a taste of NY Yankees baseball this past season but is expected to start the 2016 season in the minors because there is no starting spot for him on the big club. For Judge, experts say he may be another year away. With such an old and boring roster, I don’t want to wait that long for either guy.

4) The Philadelphia 76ers to win the NBA lottery

Philadelphia’s masterful, majestic, historic tanking plan has not seen the best results quite yet…to put things politely. If Dario Saric comes over from Europe and Joel Embiid ever gets healthy, that could turn quickly. What would turn it even more quickly though would be for the team to finally win the lottery this year.

LSU’s Ben Simmons is the best NCAA prospect people have seen in years. The Process may end up being worth it if the 76ers land him, and as a casual NBA observer, I want to see this thing play out. A fivesome of Simmons, Embiid, Saric, Jahlil Okafor and Nerlens Noel can’t play together, but it’s quite a talented quintet with a future.

That video of Santa Claus’ counterpart for those who’ve been bad is hilarious! Keenan does an excellent job as Sump’n Claus, giving cold hard cash to those who do not deserve it. In the spirit of giving, I’m wishing for two more things to round out our Sports Holiday Wish List.

You nailed it with your first four wishes. The Yankees need to get younger today, not in a year or more. The Giants also need fresh blood, and Virginia Tech has earned itself a win to finish off their coach’s career. I suppose the only reason the Sixers ‘deserve’ the first pick is because, as you noted, everybody gets Sump’n.

As a New York Jets fan, this is tops on my wish list. The Jets do not own tiebreakers against the Chiefs or Steelers for the AFC Wildcard. They do however own the tiebreaker over the Denver Broncos. Let’s go Chiefs!

Kansas City has been on a tear of late, winning eight straight football games. If they can close the one game gap over the Broncos, this can potentially vault the Jets into the playoffs. Thank you Santa Claus for making this happen.

The Knicks have a growing star in rookie sensation Kristaps Porzingis and I for one would like to see him in the playoffs. New York isn’t going to win anything this year, but watching the team finally break through and make some playoff waves would be fun as hell.

I’m not a Knicks fan, but as a fan of basketball the NBA is simply better when the Knicks are interesting. Both the Lakers and Celtics are boring this season. My Clippers have a legit shot, but with New York making headlines in the playoffs, the NBA would be super awesome!