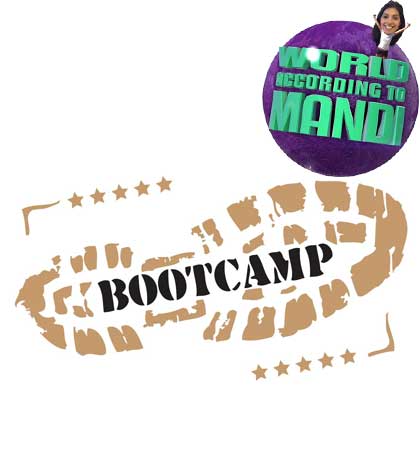 I’m practicing what I preach people! Woo. I’ve been switching up my workouts and when a friend told me about his love for Barry’s Boot Camp I just had to try it! People all over Los Angeles rave about this workout establishment in particular, but until now I was in the dark. I’d done boot camp classes before, but now I know that nothing beats Barry’s Boot Camp! It’s got its own unique style and is a killer workout.

Barry’s was like no other boot camp I’d been to, and I knew from the very moment I stepped into the room and grabbed one of the fancy treadmills that it was going to be amazing! The instructor started out by giving us the option of the treadmill or floor weights. Instinctively, I opted for the treadmill! Ultimately we’d be splitting up the hour class into four fifteen minute sections, two treadmills and two floors. It’s a full body workout class and damn, I got that workout.

Let me tell you, I felt pretty good during those first fifteen minutes. I could feel my breakfast sitting in my stomach though, and next time I would for sure eat even earlier or lighter prior to class. That first run was all intervals with no incline. No biggie at all! But woo, when the fifteen minutes were up I was excited to be done with a fourth of the class. I was already drenched in sweat and quite parched.
Then came the “floor,” which I was nervous about. I wasn’t sure what kind of weight exercises we’d be doing and how much weight I could actually lift. Silly me! Of course my apprehension was crazy. I used eight pound weights the first fifteen minutes and twelves the final fifteen minutes. Since this was a full body class, the weight exercises were a mixture of lunges, jump squats, arm curls, push-ups, and a variety of other arm exercises. All of them were exercises I’d done before, but definitely not as many reps and in such a high intensity environment. It was awesome!

After the first thirty minutes I felt solid in the class. My breakfast had definitely settled and I was energized to run more and do another weight training circuit. Boy did I have it coming! The final running section was hard. More intervals, this time with steep inclines added to the fast paced run. Phew! I was ecstatic when it was over. That meant just fifteen more minutes of weights, but damn they were tough too! The last fifteen minutes focused a lot on the core and after thirty minutes of interval running my core was beat! I pushed through it and felt invigorated when we were finished. I’d survived and I wanted to do it all over again!

Barry’s Boot Camp made me realize one thing that I crave from my workouts: Intensity! I always try to bring it, but the class showed me how a structured set of challenging workouts automatically brings intensity. Someone is telling you when to speed up, when you can stop, what to do next, and when you are over. How amazing! I’d forgotten how much I liked that in my workouts. I’ve always wanted a personal trainer, but until I get one I’ll be getting my fix from Barry’s Boot Camp! Bring it Barry! I’m excited to rock it again!