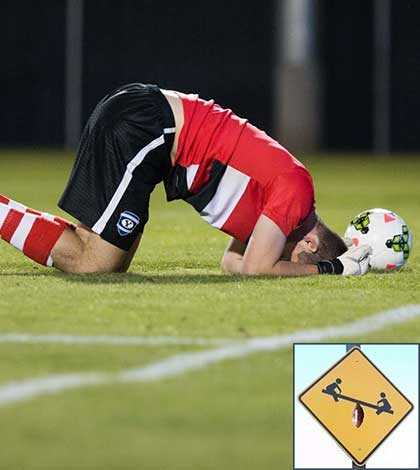 The game of soccer is pretty awesome, but the rules are so damn annoying. Late game substitutions make watching unbearable, and one or two changes could revolutionize the sport. What is soccer waiting for?

I disagree with your assessment of the sport of soccer. You say the sport is not entertaining to watch, but when the players are actually playing, its wildly entertaining. There are few things better than watching a clinic of crisp passes splitting through a defense on a team’s way to a beautifully set-up shot. Even if a goal isn’t scored, the excitement of the play itself is not ruined. I never agreed with the argument that few scores meant the sport was boring. Few scoring chances leads to boredom, but whether the ball actually hits the back of the net or not is almost irrelevant (except to the final score of course).

But soccer isn’t all action. It’s a lot of crap. That crap is what has me down. Other sports have problems with players skirting the rules or extending the rules as far as possible to gain an edge, sure. But no sport is as egregious or obnoxious about it as soccer. Flopping in basketball was always done to draw a call. Flopping in soccer is often done for the same reason, but the extension of the dramatic play that players perform is beyond comprehension. Who is benefiting when a player writhes on the ground in faux horror? The play has already continued; you are only hurting your own team by putting them down a man you pompous moron!

And the substitutions! By god! Are you kidding me?? What kind of legitimate sport allows a leading team to substitute late and essentially run out the game clock? Sure, referees always add some time back, but you know how I know for a fact that refs never add enough time back? Because every team that has ever been leading in any soccer game in the history of the sport continues to do these late substitutions at slower than slow speed. If the ploy didn’t work, people wouldn’t do it.

It makes me so angry how the stupidest rules are self-sabotaging an otherwise fine display of athletic entertainment.

I agree that the popularity somewhat waxes and wanes in America with how good the American teams are internationally, but the women’s teams have been good for years and years. That has never seemed to matter. As good athletes come and go through USA soccer, the only thing that will truly help the sport long-term is getting rid of the ridiculous fluff that surrounds the actual action.

I really enjoy soccer, but outside of the World Cup where the stakes for every game are incredibly high, I’ve never found it to be exciting on television. Perhaps if I developed a rooting interest in an MLS team, or a European club, I’d really get into the weekly matches that ESPN and other networks now show.

But you, on the other hand, really like watching soccer on television. Yet you’re completely pissed off at the rules. I’m sensing an oxymoron here. The game is the game. Its rules have been established for some time. So you enjoy watching the sport, except for when its stupid rules make it unwatchable. Hmm.

I never quite understood the extent to which players flop in soccer. But I refuse to knock a team for legitimately running out the clock. We don’t knock football teams for running the ball straight up the middle four plays in a row, burning the final minutes of a game in order to win. Why knock a soccer team for burning clock in the manner that their sport allows?

I know why you hate the substitutions, the flopping, and the other ‘stupid’ rules that make the game less than stellar to watch. You see these things as easy fixes. But you’re being unfair. How often do the other major sports truly change rules? Each sport works to improve itself, yes, but major rule changes are not that common.

It is rather baffling that the one rule which would nearly clear up all of your gripes remains unchanged. Simply keeping an accurate game clock that is visible to everyone would solve a ton of problems. Start and stop it when required, instead of letting the clock run and having stoppage time to end games. What is the point of stoppage time exactly? There isn’t one, if the time-keeper presses pause throughout a game.

We’ve circled back around on this debate. The reason that stoppage time remains, and the ever running clock is a referee secret, has to do with the essence of the game of soccer. Its nostalgia. It’s what soccer has always been, and its a part of what makes it unique and weird and fun. Yet I’d be the first to vote for a change. Time for soccer to evolve.

More Sports: US Soccer gains fans, but is the sport watchable?